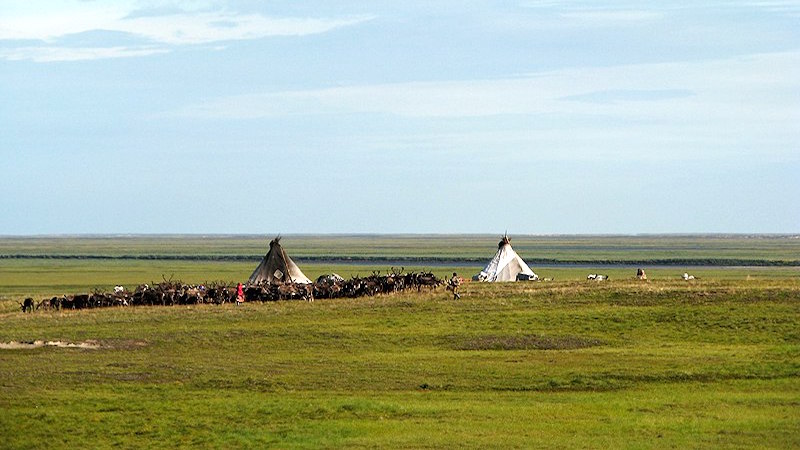 The Yamal Peninsula contains some of the biggest known reserves of natural gas on the planet. This remote peninsula in the Russian Arctic extends for 700 kilometres into the Kara Sea, and now several pipelines, offshore gas fields, and liquefied natural gas (LNG) terminals have made it their home. Those tens of millions of cubic metres of natural gas have attracted Russia's state-owned gas companies and several international investors; in 2008, Gazprom announced its Yamal Project, to unlock the region's hydrocarbons on a vast scale. 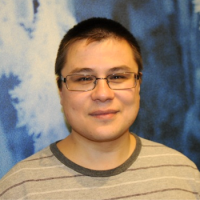 Indigenous rights activists have also raised concerns about what this large-scale energy extraction could mean for the Nenets and other indigenous peoples of Russia's far north. Dmitry Berezhkov is a member of the Itelmen [2] people from the Kamchatka Peninsula and the former vice-president of the Russian Association of Indigenous Peoples of the North (RAIPON), a Moscow-based NGO. Berezhkov says that he was pressured by the Russian security services in the capital into framing RAIPON as a threat to the state. Berezhkov moved to Norway to continue his activism but was arrested by Norwegian police in 2013 after a meeting of the World Conference of Indigenous Peoples, based on an extradition request from Russia's general prosecutor, which had accused him of fraud. Eventually, a Norwegian court ruled that the request was politically motivated, and Berezhkov received asylum in Norway. The activist lives there to this day, where he runs the Arctic-Consult NGO.

RAIPON still operates in Russia, though there have been reports of political pressure on the organisation. Starting in 2012, RAIPON faced pressure from the authorities and demands for its closure [3], earlier this month, Russia's Ministry of Justice banned [4] the CSIPN (Centre for Support of the Indigenous Peoples of the North), a project which RAIPON helped found, as a “foreign agent” due to its links with Canadian indigenous rights organisations. Pavel Sulyandziga, an outspoken indigenous rights activist from the Udege [5] community and a prominent candidate for RIPON's vice president, fled Russia in 2017 to seek political asylum in the USA [6]. RAIPON's offices in the regions were closed down, the organisation was declared a “foreign agent” and its donors “undesirable organisations.”

I spoke to Berezhkov about the consequences of natural gas exploitation for indigenous people in Russia's north. The interview has been edited for length and clarity.

Maxim Edwards: What does the future hold for the indigenous peoples of the Yamal Peninsula?

Dmitry Berezhkov: More gas fields are being developed, further to the north and east of the peninsula and towards the other side of the gulf of the River Ob. The gas pipeline network is like an octopus; it spreads across the land. And for every pipeline and for every road, they take another piece of land away from reindeer herders. For now, reindeer herders try to use the rest of the land, but that means their herds may become smaller, and they are now starting to compete with each other for pastures. The problem is developing gradually, it gets a little worse every year.It's like a game of chess, they build one pipeline, then the herds move elsewhere.The growing infrastructure means that reindeer herders have to find new areas to graze, and if there are none, they have to put pressure on the same areas with even more reindeer. For example, the herds eat reindeer moss [7] (Ru: Ягель), and the increased competition means that less of it is left. And less food for reindeer could mean smaller herds, and slaughtering animals which can't be fed. Either the government will sponsor a programme to kill reindeer, or the flocks will die out because of starvation. I don't know. But I think that over the next one or two decades, a huge number of reindeer will die in the Yamal. More indigenous people will settle in the villages, which can lead to social diseases, alcoholism, and other things like that. They will lose their language and traditional livelihood. I think that's the future.

ME: It seems to me that this is not just about preserving traditional lifestyles, but about the rights of indigenous people as citizens. For example, many of these areas are protected; when a pipeline is being built on the land, are the Nenets able to say “no”? Are they asked?

DB: There are some attempts to organise on the regional level. There's a reindeer herders’ union, for example. The problem is that all these organisations and their leaders are heavily influenced or controlled by the state and the oil and gas companies. They're happy to organise festivals, reindeer herding celebrations, sport events, cultural and linguistic events. But if there's a conflict between the interests of reindeer herders and the interests of the gas and oil industry, practice shows us that these organisations don't or can't protect indigenous people's interests. And it's difficult for Nenets people to organise given that they're spread over huge territories. They're nomadic. They follow their herds; they may have to travel hundreds of kilometres away in a few days. The lifestyle leads them to follow clan or family ties first. Occasionally several dozen people might meet, but they can't meet in very large numbers because their herds will eat all the food around. Reindeer have to be spread over huge territories to make herding sustainable.

ME: How have local people responded to these changes?

DB: Last March, some Nenets held a tribal meeting to discuss important issues, as well some political disputes. But then the leader of the district branch of one of these community organisations, which I would call pro-government, wrote a letter to the police saying that the meeting was against Russian law, as it had been held without seeking permission in advance. The funny thing is that [Vladimir] Putin has often said that protests bother other people — passengers, traffic, etc — so you have to coordinate in advance with authorities. But this meeting was in the tundra, there was nobody for kilometres and kilometres around around except for these reindeer herders! Police opened an administrative case [8] [against the organiser Eiko Serotetto], but there was a lot of media discussion and [last May] they quietly dismissed the case [9].

ME: What does that mean for the relationship between the gas companies and indigenous peoples? There have been cases like that of Sergey Kechimov [10], the shaman and reindeer herder who tried to resist Surgutneftegaz's plans for oil extraction near a lake sacred to the Khanty people. In 2015, Kechimov was arrested for attacking an oil worker on grounds which human rights defenders considered dubious.

DB: The situation differs by region. In the Khanty-Mansi Autonomous Okrug, where Kechimov was from, the companies were obliged to sign some agreements with indigenous communities. The problem in the Yamal is that firstly, regional law means that these are more voluntary agreements, and secondly, about half of the population, which have most of the reindeer, are private reindeer herders. They don't depend on and don't connect with any community organisations or with villages, companies, or local administrations: they continue a traditional lifestyle. This is the status quo, and it suits everybody. It's good for the reindeer herders because they don't depend on bureaucrats and just follow their herds. It's good for the bureaucrats because they don't have to care about these reindeer herders. It's good for the companies, because when we ask why less and less land is available for reindeer herders, and its quality is getting worse, they can say that it's the herders’ fault because they have too many reindeer.

So in the Khanty-Mansi region, families can sign agreements with the energy companies: they agree to step away from their traditional lands and receive some financial support. The sum may not be like in the fairytales which Gazprom, Rosneft, or Lukoil tell at international fora, but it is something. Problems arise when there is no longer any traditional land left to give. That was the situation for Kechimov; he simply had no other land to move on to. This is because oil extraction started much earlier in the Khanty-Mansi region. But in the Yamal, there is land left. There's gradually less and less of it, but there are places left to go. Another difference is that natural gas doesn't pollute the land as seriously as oil, which damages the environment much more quickly. But that doesn't mean that there aren't conflicts in the Yamal. Kechimov's case showed us that when the government and the energy companies are united, they can resort to any means, including criminal prosecution, to make families either sign agreements or leave their land.

ME: What other problems do these big pipeline projects present for indigenous communities?

DB: The Yamal's reindeer herders are facing a perfect storm. A lot is changing. The energy companies attract migrant workers, who settle in the region. If they have no work between shifts they go and fish in the rivers, drink in the village bars, sometimes have relationships with local women, which can be a source of tension. And of course there's the effect of global climate change. People in the Yamal have already died or been seriously ill due to anthrax [11], or the “Siberian plague”, being released from melting permafrost. The changing climate means that unusual rainfall freezes quickly and forms ice over the snow, which prevents reindeer from grazing. Poaching by energy workers is a big issue, as is pollution. This means there's double the pressure on local wildlife, alongside temperature changes in the rivers due to global warming. For example, there's a local fish, the muksun [12], which is a delicacy in local cuisine and provided good income to local Nenets people who sold them to the workers. But now, there are almost no muksun left. Wealthy oil and gas executives who developed a taste for the fish have to buy it from Canada!

ME: How easy is it to find out about the situation in such a remote and inaccessible region? Can the internet help?

DB: It's not difficult, it's more or less impossible. Personally, I can't go back to Russia, but I try and follow all the newspapers and TV reports closely, and of course people discuss these problems on social media. According to Russian law, all areas around the edge of the country's landmass count as border regions. This includes the Yamal, as it's located in the Russian Arctic. To go there, you need an invitation from a local resident or organisation, which is of course signed by the FSB [Russian security services.]

So when the companies and the authorities say that they spoke with the reindeer herders and that the herders agreed to everything, it's hard to really know how that discussion went. Officials could have just come to their campsites with a piece of paper and said “you need to sign this.”

From a practical point of view, it's wise for any reindeer herder to just sign any such paper. Because high bureaucracy can't help you, but it can certainly hurt you. For example, we have some cases when a police helicopter comes to a nomadic camp and tells them “you're catching too much fish, and that makes you a poacher.” They can come to nomadic camps and ask why they don't keep their guns in a safe, as demanded by Russian law. Even if you're a reindeer herder.

Nobody will touch you if you mind your own business, but if you raise your voice, you could face trouble.