Holy controversy over proposal to mention God in Russia's constitution

The move was suggested by the Russian Orthodox Patriarch in February 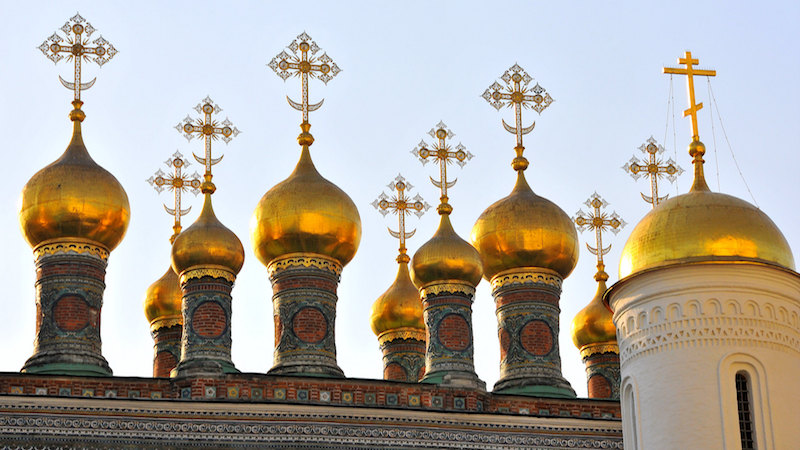 In Russia, everything seems about to change so that everything can stay the same. In an address to the Federal Council in December, President Vladimir Putin suggested an overhaul of the country's constitution. The consensus among analysts is that the amendments, which envisage a transition from a semi-presidential to a parliamentary system, are intended to allow Putin to maintain power after his last term in office ends in 2024.

In mid-January, Putin established a working group of public figures to assess proposals for amendments, and by the end of the month had submitted a bill to parliament including several amendments. Over 22,000 citizens have already signed an open letter decrying what they call a “constitutional coup.” Although parliament has given tentative approval to the idea of strengthening its powers, it remains to be seen precisely which other amendments will make the final cut, as they will be voted on as one package. A parliamentary vote to that end could be held in April, but there is still less clarity over the prospect of a national referendum to enact the changes, as Putin supports.

What can be said with more certainty is that the prospect of altering Russia's constitution has opened Pandora's Box — everybody from the parliamentary opposition to ultra-conservative activists has an opinion and a suggestion. The working group has so far received over 500 of them. These have ranged from a demand to enshrine Russia's role in ending the Second World War in the document to honouring the country's nuclear arsenal in a constitutional clause. There are proposals to ban civil servants from holding foreign passports or residence permits. There are rumblings about declaring Russian legislation above international law. There are calls about introducing the role of “Supreme Ruler of Russia” into the constitution, though Putin's spokesman says the president has no opinion on that issue.

And then there is a proposal by Patriarch Kirill. On February 1, the head of the Russian Orthodox Church stressed that the Almighty should be mentioned in the constitution's preamble, given that “most Russians believe in God,” and not only Christians. If the God was mentioned in the country's national anthem, he continued, the constitution should follow suit. Last week, members of the working group confirmed that they have not yet discussed the patriarch's proposal — but that hasn't stopped the rest of Russian society.

The Russian Orthodox Church has significant clout in Russian society, which has led to some resentment. Sociological surveys appear to indicate that Russians have returned to religion, but not necessarily to church. Despite a resurgence in religious identification in the post-Soviet states, regular religious observance remains low across the region.

To this day, Ukraine is the sole post-Soviet state which includes a constitutional reference to God — supporters of the patriarch's call have often pointed out that several comparatively “liberal” European states, including Germany, Ireland, and Norway, have done the same. Indeed, the most significant mention of specific religions in Russian legislation came in a 1997 law on freedom of confession, which stressed the “special contribution” of Christianity, Islam, Buddhism, and Judaism to Russia's culture and history. For traditionalists, that fact alone could sit uneasily with the customarily close relations between ruler and church in Eastern Orthodox Christianity.

So there are several tensions at play. In his February 2 column for the Russian service of Deutsche Welle, commentator Konstantin Eggert considered the juxtaposition between Russia's religious revival and the secular heritage of Soviet rule. For now, concluded Eggert, it suits the regime to portray opponents to moves such as these as “leftist atheists,” but eventually the state would come calling for even more robust support from the church — potentially at the expense of the church's legitimacy.

The constitution of 1993 was written by Soviet-era intellectuals who didn't have the smallest understanding about religion. The charged reaction to the words of the Orthodox Church head today is a product of the chaos of ideas which rules the minds of a significant proportion of a post-Soviet, and mostly but not exclusively opposition oriented, intelligentsia. These people, just as they did under the Soviets, confuse secularism with state atheism.

Russians across the political spectrum have long viewed this constitution, passed under President Boris Yeltsin, with unease. Today liberals despair of Putin's motivations for changing it, but they have complained about the extraordinarily wide ranging powers it offered the president. Conservatives and “patriotic nationalists” bristle at its overtures to the “international community,” the fact that it makes no reference to the Russian ethnic community, and its enshrinement of the country's multiculturalism and (now diminished) federalism.

The working group on the constitution contains several public figures in the latter camp. One is the nationalist writer Zakhar Prilepin, another is the senator Andrei Klishas, a driving force behind the country's “Sovereign Internet” initiative. Nevertheless, the move has divided members of the group; the athlete Sergey Burlakov goes even further and supports declaring Russian Orthodoxy the state religion. Mikhail Emelyanov, the deputy head of the Duma's committee on legislation, described any state religion as unconstitutional, but believes that a nod to the divine in the preamble would not contradict Article 14, which establishes a division between church and state. Lawmaker Pavel Krashennikov noted simply that if God exists, he exists regardless of whether he is mentioned in Russia's constitution.

Given Russia's conservative turn in recent years, it was perhaps inevitable that such perspectives would loom large over any rethinking of the constitution. Konstantin Malofeev, a prominent champion of hardline traditionalist causes, even proposed defining marriage as between a man and a woman in the constitution's preamble. Putin did not expressly support or rule out that amendment, but strongly expressed his opposition to same-sex marriage in a meeting with members of the working group on the constitution on February 13. “There will only be mum and dad,” said Putin, “not parent number one and parent number two.”

In any case, critics tend to object to the patriarch's proposal as a distraction from more pressing issues for ordinary Russians:

Here's an edited option for Article 39 of the constitution:
“Social guarantees: God will provide. Amen!”

Meanwhile, the patriarch has found support for his proposal among Russia's communists. Party leader Gennady Zyuganov endorsed the move on February 11, pointing out that the “moral foundation of communism is built on the Bible.” Even Tsargrad TV, an arch-conservative, Orthodox television network funded by Malofeev, ran an article addressing the seeming inconsistency, pointing out that Joseph Stalin eventually came to recognise the patriotic virtues of the church and sought a rapprochement with its leaders in the 1940s.

Zyuganov's words may appear puzzling to foreign observers. It is important to remember that in contemporary Russia, nostalgia for state socialism as much reflects discomfort with the perceived social liberalism of post-Soviet life as much as a yearning for the social stability of the Soviet era which preceded it. But that hasn't stopped social media users from mocking the communists’ perceived inconsistency:

Perhaps this trenchant criticism is less a dig at Orthodox theology or at faith in general, but a reflection on who looks out for ordinary Russians today. God, or the state? Who deserves their trust, or even their faith? The writer Dmitry Bykov recently addressed this issue in a poem for the independent newspaper Novaya Gazeta. Curiously, he gave his support.

Yes, I'd write God into the constitution,
I don't see any cause for drama,
Without him there's just destitution,
A derelict house or church: bad karma.

God has a place in the constitution,
Where else? He's left Russia far behind,
Let atheists have their retribution,
And mock or sneer; they're still blind.

Yes, I'd write God into the constitution,
Source of our duties and rights,
For I see no other explanation,
Why Russia staggers on, in spite…