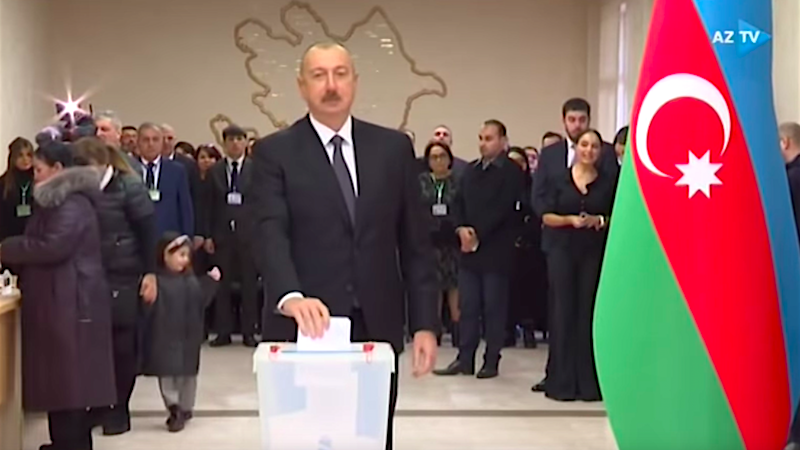 Who remembers Paul to the Octopus, who predicted the winners of several World Cup games from his tank? Paul was given two boxes with food, each decorated with the national flag of the team playing that day. Paul's prediction was based on which of these boxes he ate from first. One may ask, what on earth Paul has to do with a recent election in Azerbaijan?

Judging by the peculiar results, elections in this country on the shores of the Caspian Sea might as well be controlled by an octopus. On February 9, Azerbaijan held an early parliamentary election, nine months ahead of schedule. Although the decision was first proposed by the country's National Assembly, where 99.8 percent of deputies voted to dissolve parliament, the move was pushed forward by longtime President Ilham Aliyev who accepted the proposal in November and dismissed the legislature in December. Aliyev's decision to hold a snap election caught many observers by surprise. After municipal elections on December 23, the country's opposition had little time to turn around and start preparing for February 9.

Paul was given a fair choice. Although Azerbaijan's voters faced a choice of over 1,300 candidates, many pundits inside the country believed that the results of the election had been determined in advance. Nevertheless, Azerbaijan's authorities made an effort to convince the world of the transparency of their electoral system and integrity of the country's democracy — international human rights watchdogs remain to be convinced.

That's why some opposition parties boycotted the election. Others decided to participate, regardless of the predictions and aware that their chances of victory were very low. Nevertheless, candidates seen as loyal to the ruling New Azerbaijan Party won all but one of the 125 seats in the National Assembly. And although some observers had been wondering whether the authorities were planning to bring new faces into Azerbaijani politics, 87 parliamentarians kept their seats.

Turnout was low at just 48 percent.

“The restrictive legislation and political environment prevented genuine competition,” reads the preliminary report by election observers from the OSCE (Organisation for Security and Cooperation in Europe), released on February 10. The report also spoke of “significant procedural violations” in vote counting and tabulation. One of these incidents, featuring member of parliament Jale Aliyeva, is an illustrative example.

I would like to thank everyone who bravely fought in this election, when needed, throwing folders at people; grabbing phones out of hands, and throwing them on the ground [then, quickly correcting herself: “almost to the point of throwing them on the floor”]… Let me just say, we worked as one team.

This was Jale Aliyeva's fourth reelection as deputy for Zerdab, a city in central Azerbaijan.

Much like previous elections, it seems that this one featured all the usual vote-rigging techniques. Journalists have attested to carousel voting, ballot stuffing, rigging tabulations, and harassment of independent observers.

Meanwhile, there were reports of international observers with dubious credentials:

Mamadli also offered a more detailed post-mortem of the election:

With the help of smartphones and social media, the ruling political team were shamed at home and abroad. As a result, reactions both internationally and locally increased. The political regime is living through difficult times as a result of social/economi discontent. This is precisely why, they changed the election dates, so to prevent organising and political maturity of the society. Now, by going against a few of their supporters in 4-5 constituencies they are trying to do damage control. This is why, it is important to focus on the legal violations rather than political results. Overall, without finishing the struggle on legal violations discussing the results of the election from a political point of view, does not really help with protection of democratic freedoms. Basically, the election were held in an emergency rule, with mass police intervention. An adeqaute response to this situation would be pursuing legal proceedings and public shaming. In short, legal disputing play an irriplaceble role in the process of losing confidence and political influence of the authoritarian regimes.

Anar Mammadli (also spelled Mammadov) heads the Election Monitoring and Democracy Studies Centre, the only independent election observation organisation in the country. The four or five election precincts he mentions are a reference to the CEC (Central Electoral Commission) decision to cancel election results in at least four constituencies due to electoral fraud. On February 13, the head of the CEC Mezahir Penahov went as far as to even thank social media users in helping to document these violations, something unheard of in a country where members of the parliament regularly criticise social media platforms and often suggest ways to control and monitor their use.

The ample amount of evidence circulating online and mentioned in the reports of international observers forced a response not only from the CEC but also from president Aliyev himself. On February 10, the president had said that these were free and fair elections. But just four days later, vowed to thoroughly investigate all allegations of violations at voting stations.

International partners have also voiced concern about how the elections were conducted, such as this statement by the UK's Foreign and Commonwealth Office:

The United Kingdom is disappointed that Azerbaijan’s parliamentary elections did not meet international democratic standards, according to the Organisation for Security and Co-operation in Europe (OSCE) and the Parliamentary Assembly of the Council of Europe.

The restrictive legislation and political environment prevented genuine competition during parliamentary elections in #Azerbaijan according to @osce_odihr. We call on ?? to implement recommendations of @osce_odihr – which we stand ready to support with EU. https://t.co/a8DAOm299E

The next day, when I read the Central Election Committee’s results, I was in shock. According to them, out of 1,121 registered voters, 482 arrived to vote and 96 of them voted for New Azerbaijan Party candidate Mikhail Zabelin. But according to all observers, and my own eyes, the number of voters couldn’t be any greater than 123.

On February 11, a group of candidates, journalists, and political activists gathered outside the CEC's offices in the capital of Baku to protest the election results. Police detained more than 20 independent and opposition candidates and used excess violence against them. The police have since been driving protesters out to remote regions of the country and dumping them there.

Due to these irregularities, some citizens have called for the election results to be cancelled.

In the video above Jan Mirzayeva, who acted as an independent election observer, shared her experience of election day:

“On February 9, 2020, during the snap election, I witnessed teachers going out of their way to falsify an election; aunties in headscarves visiting one precinct after another [referring to the carousel voting], and dead people coming to vote [referring to deceased voters whose names were used to falsify results as voters]. I don't consider this election valid. I am a citizen. And I don't intend to be silent”.

This is why some Azerbaijanis are now taking to social media to demand the annulment of the election results. They are using hashtags such as #hamısınıləğvet and#YeniSeçkilər (“cancel it all” and “new elections” in Azerbaijani).

It is hard to predict how the authorities will respond to these calls. As mentioned earlier, when the decision to hold the snap election was announced there was some sense of hope that indeed, new faces (alas not many) would be allowed to enter into the parliament. Azerbaijani society is increasingly angry at economic stagnation and recent investigations exposing official corruption.

Nevertheless, there has been some internal political reshuffling. Two months ahead of calling for the snap election, Ramiz Mehdiyev, the powerful head of presidential administration and a Soviet-era apparatchik, was dismissed from his post. As political analyst Farid Guliyev explained for New Eastern Europe journal:

The Mehdiyev-linked group (also known as the “old guard”) is dominated by people from the Nakhchivan region, and includes the former Minister of Internal Affairs Ramil Usubov and ex-presidential advisor Ali Hasanov, all appointed by [Ilham] Aliyev's father, [Heydar Aliyev]. The “old guard” was considered one of the key factions in Aliyev’s ruling coalition. Its power could only be rivalled by the rising influence of the first lady Mehriban Aliyeva’s Pashayev group. The first lady-linked Pashayev group and its business conglomerate Pasha Holding have grown stronger over the past decade. The popular view is that Aliyeva holds ambitions to become the nation’s first woman president. In 2016, the constitution was amended to establish the post of the vice presidency and the following year she was appointed as the first vice president.

As “old guard” officials were dismissed, they were immediately replaced by younger, seemingly technocratic cadres. For example, Mehdiyev was replaced in his post by a 44-year-old Duke University graduate named Samir Nuriyev. Another American-educated official, Mikail Jabbarov, was appointed as the new minister of the economy, having previously held other ministerial posts.

Some country observers interpreted these changes as a gathering momentum for reform, a shift of power from the “old guard” to the emerging group of young cadres (dubbed “technocratic reformers”). Some pundits evoked the model of “authoritarian modernisation”.

The average Azerbaijani citizen does not care for these political games among the elite, but about something much more fundamental: whether they are heard. These elections appear to prove that isn't the case.