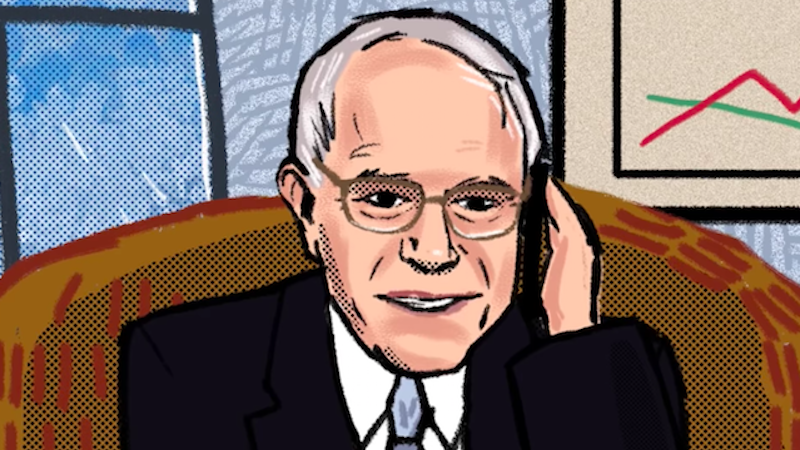 Screenshot from Vovan and Lexus’ YouTube video of their prank call with US Senator Bernie Sanders.

In the heat of the US Democratic primary, Senator Bernie Sanders would appear to be the latest international politician to fall victim to Russian pranksters Vovan and Lexus, the pseudonyms of Vladimir Kuznetsov and Alexey Stolyarov. At least, that's what the pranksters claim: the Vermont senator's campaign office has not yet commented on the recording's authenticity.

On 13 February, an animated video was uploaded to the comedians’ YouTube channel featuring the audio of Sanders’ 11-minute call with whom he believes to be Greta Thunberg and her father Svante. “Greta” praised the senator's ecological proposals and offered to provide an endorsement for his presidential campaign. The video soon descends to the strange when the pranksters suggest that Sanders would gain the youth vote if he starred in a rap video with Kanye West and Billie Eilish. The senator laughs cordially at the suggestion that he would have to wear gold jewellery.

It doesn't take long for Russia to feature in the call, when “Greta” and her father express their concerns about an upcoming trip to the country and ask Sanders for his advice. The senator tells them that “to the best of [his] knowledge, Putin is very bad on climate change,” warning them against “just walking in there and getting used as a photo opportunity,” and advising them to research the ecological situation in Russia and urge the Russian leadership to “transform their energy system.”

Sanders is then asked whether he believes it is possible to “lead the United States towards communism,” to which he responds that democratic socialism has far more in common with governance in Sweden than in the Soviet Union.

Then things go downhill when “Greta” and her father express interest in Sanders’ visit to the Russian city of Yaroslavl in 1988. They jokingly suggest that he was a sleeper agent for the KGB, the Soviet secret police, which has altered the senator's memory in case the CIA discover the truth. “Is this what you really believe?” asks Sanders, incredulously. “Greta” responds that it is time for her to activate him with a special phrase. The call abruptly ends.

It is not known when Vovan and Lexus recorded their latest call, but they did allude to a prank with Sanders in a Tweet shortly before its release:

Сделать ли нам пранк с Берни Сандерсом? / Should we do a prank with Bernie Sanders?

Sanders, if the voice is indeed the senator's, was not the first politician pranked by Vovan and Lexus and will probably not be the last. This January, they used much the same script against Califonia Congresswoman Maxine Waters, and then in a call with actor Joaquin Phoenix. The duo shot to international prominence in 2015, when they phoned Elton John posing as Vladimir Putin — the singer believed he was speaking to the Russian president via a translator.

The mischievous pranksters insist that they have no political agenda, stressing that they have also pranked celebrities. Nevertheless, it has not escaped the attention of international media that their choice of victims seems to coincidentally align with whoever is in the Kremlin's bad books — particularly if they are Ukrainian politicians and western public officials deemed hostile to Russian interests. These have included French President Emmanuel Macron, former Ukrainian President Petro Poroshenko, North Macedonian Prime Minister Zoran Zaev, Turkish President Recep Tayyip Erdoğan, Governor of Alaska Sarah Palin, the Ukrainian oligarchs Ihor Kolomoiskyi and Rinat Akhmetov, and many others. There has been much speculation as to how two pranksters are able to dial through directly to foreign heads of state with such ease — leading some to suspect, such as the lawyer Mark Feygin, that they may have a helping hand from the Russian security services.

The pranksters laugh off that suggestion, but have been asked on several occasions why they have never once prank called Putin. In a January 2019 interview with Ukrainian news portal Strana.Ua, they claimed that Putin knew who they were, and cited technical problems in reaching him:

It's not that easy to call through to Putin. Putin, and several other heads of state, have a completely different system of communications. Putin doesn't have a telephone, first of all. The channels through which he communicates are encrypted. If we're talking about the CIS states, then every president has encrypted communications. Theoretically, even if we wanted to, we wouldn't be able to reach them.

In a March 2016 interview with the BBC's Russian service, Lexus was more open about their reticence:

We are nevertheless aimed at doing what is necessary for Russia. We understand that some recordings, including incriminating ones, would be harmful to our country; other political forces would play on them and get dividends. We believe that corrupt officials and others have to be fought in any case. But every concrete case needs to be assessed so that the country does not suffer politically as a result.

Questions about Vovan and Lexus's intentions will no doubt continue to be asked — until and unless the pranksters be their boldest yet by trying to dupe a prominent Russian politician.