Public discontent has not stopped authorities from censoring the web 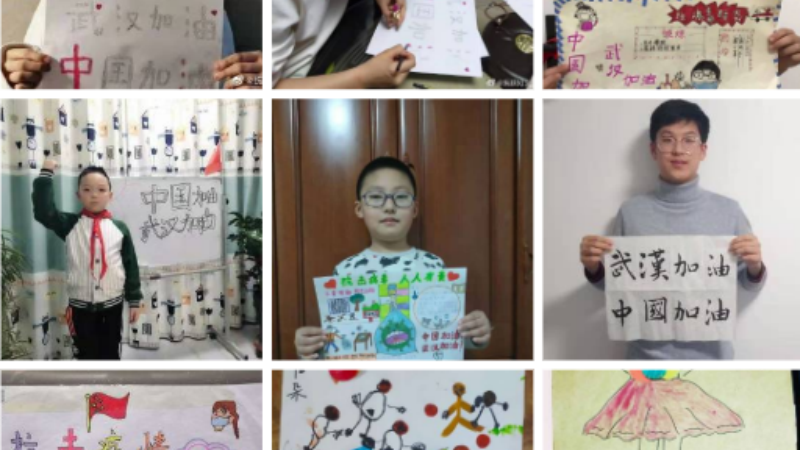 School kids are mobilized to spread positive energy and express their support for Wuhan. Viral image from Weibo.

The recent death of Dr. Li Wenliang, the physician whose warnings about the potential outbreak of the strain of coronavirus now known as COVID-19 went unheeded, set Chinese social media on fire. Now, Chinese netizens have turned their grievances into courageous demands for political reform, pushing the term “freedom of expression” to the top of Weibo‘s search results.

Public discontent, however, has not stopped the propaganda authorities from prosecuting independent voices and censoring the web. Commentary criticizing the failure of Chinese political systems was censored on social media platforms, including WeChat and Weibo. Two citizen journalists reporting from Wuhan, the capital of China’s Hubei province, where the virus originated, have disappeared. Chen Qiushi has been missing since February 6, 2020, the night of Dr. Li's death; three days later, Fang Bing also disappeared.

As of February 15, there are 66,577 cases of infection from the virus, and a death toll of 1,524. Yet, over the past week, Chinese social media has been flooded with encouraging messages coming from Wuhan. “How to turn a depressing crisis into positive news?” — Chinese journalist Michael Anti showcased a typical propaganda piece with the Global Times’ headline screen capture:

On February 13, China reported 15,111 new infections from the virus and 252 deaths — a 742 percent surge from the figures just the day before — a result of the change of leadership at Hubei province's Health Commission. While Chinese netizens were still in shock over the rise, the Global Times headlined its February 14 report, “New infections from coronavirus in Hubei dropped more than 10,000 when compared with the previous day!”

Such examples are just the tip of the iceberg when it comes to the positive energy campaign; there is a more sophisticated effort at work in controlling the narrative of the COVID-19 outbreak, which involves turning the crisis into a heroic story of a strong nation.

While the majority of Chinese netizens see Dr. Li Wenliang as an ordinary hero who resisted the authorities’ initial cover-up of the outbreak, pro-government online discourse accused people of politicizing the incident. In response to the February 12 commemoration of Li's death outside the Beijing Liaison Office in Hong Kong, for instance, @usltuvS59jt41H0 said:

Li Wenliang’s death had nothing to do with his talk about freedom of the press. The coronavirus is the sole cause of his death. We are touched by his will to fight against the virus so that he could return to work. But you [the Hongkongers] used the epidemic as an excuse to launch a ‘strike’, putting aside the professional ethics of medical workers. Those who use patients’ lives as political chips have no right to memorialize Dr. Li.

At the same time, a large number of posts, images and comments emerged from Chinese social media platforms, depicting medical workers as heroes led by the Chinese Communist Party (CCP):

Medical workers are the wealth of the state, they are really the country’s treasure. They are fighting at the front line against the coronavirus, they volunteer themselves to work in the front line. Everyone is touched and is paying tribute to them. The nation is at their back! We have to safeguard their selfless hearts with trustful hearts and patience. They are our true heroes. Under the leadership of the Chinese Communist Party, China will overcome the Wuhan coronavirus.

Guancha.cn, a CCP-affiliated outlet, published a sensational story on social media about a nurse returning to the COVID-19 front line just ten days after having a miscarriage, as an exemplification of the “selfless” heroine. The story has gone viral, with heavy criticism directed at the propagandists for their heartless cruelty.

Dancing in the battlefield

Instead of showing images of sickness, fatigue and death at the front line, video clips of medical workers and patients dancing in hospital wards have gone viral on Chinese social media. @duqiaoxiaoyao republished one of the video clips on Twitter:

Repost: ever since the 300 positive energy propagandists arrived at the front line of the coronavirus battlefield, the direction of public opinion channelling has shifted. A netizen just commented: it is easy to beat down a mountain, but difficult to out beat a bunch of idiots.

On February 4, China Central Television reported that more than 300 journalists working in state-affiliated media outlets had been sent to Wuhan and Hubei to report from the front line. Zhang Xiaoguo, a director at the Central Propaganda Department said the authority would coordinate propaganda of epidemic prevention and control according to the party's main political themes (主旋律).

As @AxVYJhw7FQX1XAn pointed out, led by the propaganda drive, people in quarantine camps are also dancing in the wards, regardless of the health risk:

Look at this political entertainment! In such a huge quarantine camp where hundreds of people are sharing the space and some may be coronavirus or other virus carriers, there is clearly a human transmission risk. Doing exercise in such a setting would increase the breathing in of air into the lungs — do the organizers of such activities want to see more transmission? The coronaviris is scary, but stupidity is more overwhelming.

Even more terrifying? Having a birthday cake in the coronavirus patients’ ward:

#Recording the beauty of life in #China The white angels are holding a birthday party for an 80-year-old coronavirus patient in the Huoshenshan hospital. This is so touching that tears keep falling…

The CCP also viewed the crisis as an opportunity to spread the tale of Lei Feng — a party-loyal, self-sacrificing figure constructed during the Chinese Cultural Revolution. On Weibo, grassroots party organizations such as the Youth League and Women's Federation have been using Lei Feng to mobilise volunteers, as this excerpt of a report published by the Heilongjiang Women's Federation illustrates:

At this critical period in the fight against the new coronavirus, Women's Federation volunteers are the living spirit of Lei Feng: they put aside their family’s need in service of the bigger family’s need, and fight against the epidemic at the grassroots level by taking care of their neighbors, guarding the front gates of residential districts. They have done so many good deeds to warm people’s hearts, and manifest the distinctive role of women in the family and in society. They have become beautiful backdrops of Heilongjiang’s front line battle against the coronavirus!

The propaganda surrounding 2019-nCoV also has an international thrust. The story about the donation of 100 euros by the Comoros China Association for Friendship has been republished on many Chinese social media outlets. The Chinese Communist Youth League posted the story on Twitter:

[The story about the 100 euro donation presented by the Comoros-China Association for Friendship is so touching!] As China is fighting against the coronavirus, the 100 euro donation presented by the East African island nation Comoros has caught Chinese netizens’ attention. One comment said: A feather that comes from a thousand miles away, carries more weight than the gift.

The video attached to the post highlights the fact that Comoros is one of the poorest countries in the world.

On February 14, the China Lei Feng Engineering Committee (中國雷鋒工程辦公室), China Lei Feng Post（中國雷鋒報), and Learn From Lei Feng Office（全國學雷鋒辦公室）issued a joint notification that “touching stories” should be collected from overseas Chinese; it is therefore quite likely that there will soon be a spillover of positive energy from Chinese social media to the world wide web.