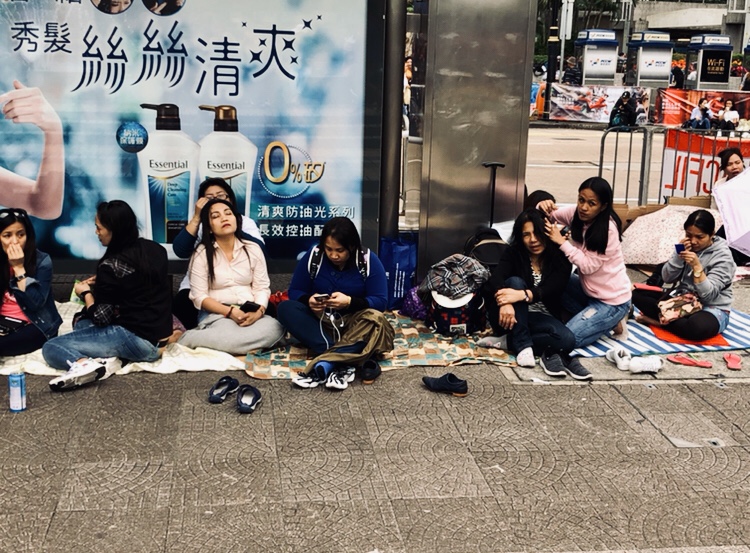 Her body is heavy with fatigue after a 17-hour shift, but Janey*, 29, finds it impossible to fall asleep. She scrolls through her Facebook newsfeed in an effort to distract herself from the hunger pangs. It’s midnight, and her working day will begin again in six short hours.

Janey traveled to Hong Kong from the Philippines two years ago to take up a job as a live-in domestic maid for a family. She knew the work was going to be hard, but she didn’t expect her living conditions to be so difficult. Janey told me in an interview that:

The food here is very limited. My employer just gives me instant noodles, you have to train yourself to be able to eat them every day. I can also eat leftovers but sometimes there isn’t enough.

Families that employ maids are legally obligated to provide them with a private room, yet Janey sleeps on the sofa in the living room of the 700-square-foot apartment that houses the five people she waits on. She keeps her possessions in bags.

Hong Kong’s 350,000 domestic workers come mainly from poorer Asian countries such as the Philippines and Indonesia and are essential to the functioning of the city. Getting a job as a maid enables these women to send money back home to provide much-needed support to their families. Janey, a graduate in computer programming, is ambitious and determined to start a career in her field, but there aren't jobs in the Philippines, she says.

According to a 2017 report by Mission For Migrant Workers, a Hong Kong-based NGO, nine out of ten maids suffer from insufficient rest, two out of five do not have a private room, one in five have reported ill-treatment by their employers, and 25 percent are given insufficient food.

Much of the abuse these maids face is abetted by employment laws. For instance, Hong Kong’s domestic workers are legally required to live with their employers. This rule has created a breeding ground for abuse. According to Nicole Lai, Organisation Secretary at the Hong Kong Confederation of Trade Unions:

Because maids have to live with their employers, the hours are long. They either work or sleep. Sleep may also be interrupted; they are often asked to work and are often caring for children and the elderly, which can involve working at night.

Living with their employers affords maids very little privacy, and makes them more vulnerable to physical and sexual abuse. In cases where this happens, it is very difficult for them to get help. They are afraid to report cases to the police and cannot easily leave the home to do so anyway, adds Lai.

It is commonplace for Hong Kong households to have at least one maid. The busy and expensive city has a scarcity of daycare facilities for young children. By law, the minimum wage for a domestic worker is HK$4,630 (595 US dollars) per month. Families who may not be able to comfortably afford this sum may be tempted to squeeze as much work as possible from their domestic worker.

Gabriela*, 32, from Mindanao island in the Philippines, reports experiencing this. She took out a loan to pay a recruitment agency US$ 1,200 to place her with a supposedly reputable employer. The agency assured her that she would be treated well and would work a standard eight hours per day, six days per week, in her new home. She told me:

When I arrived at my employers’ house, I gave them my contract. But they told me that it is just a piece of paper that doesn’t mean anything, and I must live by the family’s rules because they paid a lot for me.

In reality, Gabriela is made to work from sunrise until past midnight, doing everything from cooking, helping look after three children and two elderly parents, and cleaning and washing the family car:

I can’t sit down for even one second because my employer doesn’t want to waste it. Sunday is my holiday but I still work 8 hours then, when I’m supposed to have the whole day off.

But leaving is almost impossible. Gabriela must earn money to pay back her loan, and she needs to send money home to support her elderly mother. She’d like to complain to Hong Kong’s Labour Department, but she’s afraid of being fired.

Breaking an employment contract through resignation or by being fired puts foreign maids in an impossible situation, because immigration laws stipulate that a domestic worker must find a new employer within two weeks, or leave Hong Kong. Finding a new job in the space of two weeks is highly unlikely. As Lai points out:

The Hong Kong labour department can’t issue new documents in that time even if they do find a new employer. It also takes four to six weeks for the immigration department to issue new visa documents.

Leaving and re-entering Hong Kong also means incurring the expense of costly recruitment agency fees and flights all over again.

Should a domestic worker get pregnant, Hong Kong's maternity laws are often not upheld by the employer. In such cases, a domestic worker is typically fired, meaning she swiftly loses her income, home, residency visa and access to healthcare.

Children born to women who overstay their visas inherit the same immigration status as their mothers — undocumented.

Our beneficiaries often arrive hungry, sick, undocumented and homeless. They are often unable to return home financially, or because they are too pregnant to fly or because their Hong Kong-born baby is undocumented.

Jessie*, from Luzon island in the Philippines, is in her early 20s. She was just eight weeks from her due date when I interviewed her in one of Pathfinders’ shelters. She learned she was pregnant after taking a mandatory pregnancy test before beginning a new contract as a maid, and then lost her job. She says she’s too scared to tell her family and can’t go home out of fear of her safety.

Pregnant maids not fired by their employers still encounter significant challenges. Under the government’s live-in rule, domestic workers have to live in their employer’s home even during their maternity leave. Unsurprisingly, most employers are unwilling to accommodate a baby, so they are often left in the care of the state until the mother can take them home.

Any change to the “live-in requirement” that foreign domestic helpers must reside in employers’ residences will go against the rationale for importing Foreign Domestic Helpers and the fundamental policy that local employees (including local domestic helpers) should enjoy priority in employment.

The Hong Kong Special Administrative Region Government does not tolerate and takes stringent actions against any abuse or exploitation of foreign domestic helpers. Any reported case of physical abuse or violation of the statutory provisions such as non-payment/under-payment of wages, non-granting of weekly rest days and statutory holidays, etc. will be thoroughly investigated, and if there is sufficient evidence, the culprits will be prosecuted.

*Names have been changed to protect identities.