Russians rally against torture after verdict against ‘terrorist cell’ 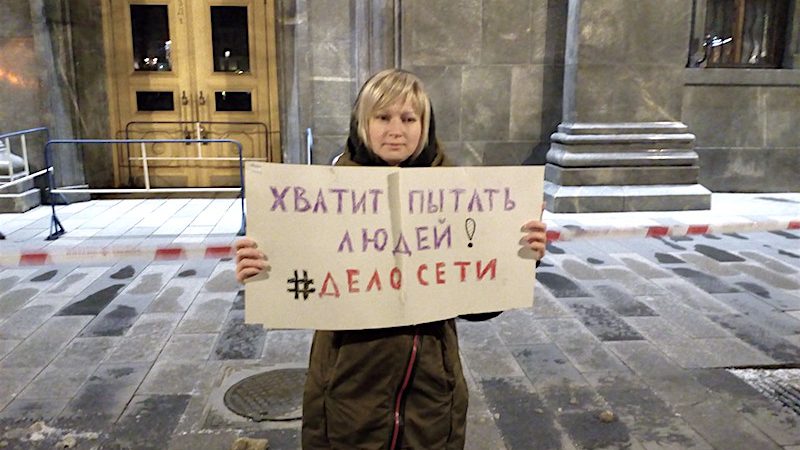 A trial in the Russian city of Penza, south-east of Moscow, has brought a close to one of the country's most disturbing criminal cases of recent years. On Monday 10, seven anarchists and anti-fascists were sentenced to long prison sentences under Article 205.4 of Russia's criminal code, concerning “participation in terrorist activities,” along with several drugs and weapons charges. The youngest, Ilya Shakursky, is just 23 years old; the oldest, the musician Vasily Kuksov, is 31. Their prison sentences range from six to 18 years. The length of these sentences, which amounts to 87 years overall, have shocked the country — the 18 years handed to Dmitry Pchelintsev is longer than some sentences received by convicted murderers in Russia.

The “Network Case,” named after the terrorist group to which the young men are alleged to belong, has prompted a nationwide discussion about the use of torture by Russia's law enforcement bodies. Prominent human rights defenders argue that key evidence for the existence of “The Network” was obtained through torture. Over the past week, hundreds of protesters have held solitary pickets outside the headquarters of the FSB, the Russian security services, in Moscow and several other cities. They have launched an online flashmob under the hashtags #делосети (the Network case), #мывсевсети (we are all Network), #судебныйбеспредел (lawless courts), and #НетПыткам (no to torture.)

The “Network” torture case is a story about fear. Hysterically fearful, the FSB wants these harsh sentences to terrify somebody who they have conjured up in the midst of their own horrors. But in reality, all this has done is convince the people that the FSB has become wildly hysterical, unstable, myopic, and vicious.

Such accounts are not uncommon in Russia today. According to a poll by the Levada Centre last year, as many as one in ten Russians claim to have been tortured at the hands of law enforcement, while an analysis of court data in 2018 indicated that most perpetrators face only mild repercussions. The “Network” case has been marred by accusations of torture since its inception, in keeping with harsh repression of anarchists and antifascist groups in recent years.

In mid-October 2017, Yegor Zorin, a student from Penza, was arrested and charged with terrorist conspiracy. His acquaintances suggested that he had been tortured in custody, during which the first allegations of the existence of “The Network” were made. Then in January 2018, two Russian antifascists, Viktor Filinkov and Igor Shishkin, went missing in St Petersburg. Filinkov stated that FSB agents demanded that he admit to membership of a terrorist cell known as “The Network,” alongside several acquaintances from Penza, who had been arrested in 2017. He later provided a detailed testimony of torture and retracted his confession. Shishkin, on the other hand, did not make any allegations against the authorities despite a medical report indicating signs of torture. He instead pled guilty and agree with the investigators’ account of events. He received three and a half years’ imprisonment. By 2019, “The Network” was officially designated an extremist organisation.

The young men in Penza whom Filinkov incriminated were a group of local activists from Penza's anarchist and antifascist scene. According to independent publication Novaya Gazeta, there is reason to believe that several members of the group did not know one another. Other members of the accused had filmed videos of themselves playing AirSoft, which was presented by the prosecution as evidence of military training to prepare for attacks. Investigators also claimed that the group, which they claimed had cells in Belarus, St Petersburg, and Moscow, planned to target the 2018 World Cup and presidential elections in Russia, charges which were not included in the final case against them.

Several members of the group, such as Ilya Shakursky, Dmitry Pchelintsev, and Ilya Kapustin, also provided detailed testimonials of torture at the hands of FSB agents, all of which allege severe beating and electric shocks all over their bodies. Nevertheless, Russia's investigative committee repeatedly refused to open a comprehensive investigation into the allegations of torture; in 2018, officials even concluded that the bruises and electrocution marks on Kapustin's body were the result of bedbug bites.

These graphic and often disturbing testimonies have resonated with a society already deeply disturbed by state officials’ lack of accountability. The political beliefs of the convicted men have also prompted some soul-searching among the opposition about the meaning of solidarity. In March 2018, Novaya Gazeta correspondent Yan Shenkman called on Russians to understand that, whatever their political differences, the Network case sets a disturbing precedent for all citizens:

In St Petersburg and Moscow there are developed systems of assistance. There are independent journalists and human rights defenders. There's nothing like that in Penza. The context also matters. The Bolotnaya case, under which many left-wingers, including myself, were sentenced was important for the entire liberal-democratic opposition. It was a story which the average journalist from the capital could understand. And here are people who face extremely harsh accusations. They're not liberals. They're not Moscow activists. We need to cut through the preconceptions towards them […] This case isn't about anarchism and isn't even about antifascism, but about the fact that tomorrow, they could come for you — for whatever reason. The electric shocker doesn't distinguish between “us” and “them.”

That solidarity took some time to materialise. But over the two years since Shenkman's column, the case has come to broader public awareness. In December 2018, the celebrated theatre company Teatr.Doc staged a production based on the torture testimonies of the accused men from Penza. On 12 February, prominent academics published an open letter against the “fabricated” case, and the following day prominent opposition campaigner Alexey Navalny harshly criticised the “barbaric” court verdict on his popular YouTube channel. The following post by Dmitry Bavyrin, a journalist for the Vzglyad newspaper, is a good indication of the mood among Russia's online opposition:

I haven't attempted to dig into the details of the “Network” case, as I can only act as a jury on a superficial level.

Do you believe that, on messengers or over a few drinks, a group of anti-fascists and anarchists might hypothetically discuss the possibility of overthrowing the state by violent means? Yes, I can easily believe that.

Do you believe that FSB officers might apply torture to their detainees in this case? Yes, I can easily believe that?

Which of these, in your opinion, represents a greater danger to society: students’ chats about overthrowing the regime or torture in detention centres. I think it's the second one.

The popular video blogger Yury Dud voiced a similar sentiment, alongside a film by Yevgeny Malyshev, a journalist for the independent media outlet 7×7, about the case. It features interviews with over 40 acquaintances of the convicted men.

You must watch this film. There's no heroisation of the defendants (among whom are some wholly problematic guys), just a step-by-step investigation of the case. And it's that step-by-step analysis which will make your hairs stand on end even more.

Unsurprisingly, some of the loudest voices raising the alarm over Monday's verdict are from the left wing of Russia's opposition — such as the activist Sergey Udaltsov and singer Kirill Medvedev. Placards held outside the FSB building in Moscow frequently featured the logo of the opposition RSD, or Russian Socialist Movement. The verdict in the “Network” case also comes at a resonant moment for Russia's antifascists — a month after the ten year anniversary of the murder of antifascist human rights lawyer Stanislav Markelov and journalist Anastasia Baburova.

Responses to the verdict also suggest that the Russian opposition is aware that whatever their political differences, the threat (and sometimes experience) of torture unites them. Comparisons to Stalinist show trials are not uncommon. On February 9, the independent politician Alexey Minyaylo posted a picture of himself holding a placard which asked the question “What would you confess to under torture?” He soon received an answer from Ildar Dadin, who in 2015 became the first Russian to be imprisoned for repeated violation of the country's draconian law on non-violent protest. Dadin, who was released in 2017, alleged brutal torture at the hands of his guards at a prison colony in Karelia, in Russia's north-west. His answer drew on this trauma:

Firstly, I would put the word “confessed” in quotation marks. When criminal terrorists force you to incriminate yourself under torture, that can hardly be called a confession. Secondly, they also broke me in the Karelian torture colony, through savage physical torture […] As a result, I can only say that under conditions of terror and wild, prolonged, maddening pain, I'm convinced that the overwhelming majority of people would not only say they did things they did not do; they'll invent anything, be ready to betray their NEAREST AND DEAREST (no matter how wild that sounds to ordinary people.) When you experience that maddening, ongoing pain, all your human principles and concepts, your moral compass, are all turned off. They are overwhelmed by the animal instinct which grows under that pain, which demands, screams, just one thing: end this maddening pain, which literally switches off your mind.

Russian society's attempts to make sense of this harsh verdict speak to the unease at relations with the state. As the political scientist Ekaterina Shulmann writes, draconian measures in the name of “anti-extremism” are self-defeating, and are more likely to convince ordinary Russians that there are no legal ways to express their discontent.

Perhaps, in those circumstances, the authorities are merely determined to remind the opposition that the truth is often what those in power wish it to be, however it is extracted.