In Lebanon, journalists and activists who cover protests face threats 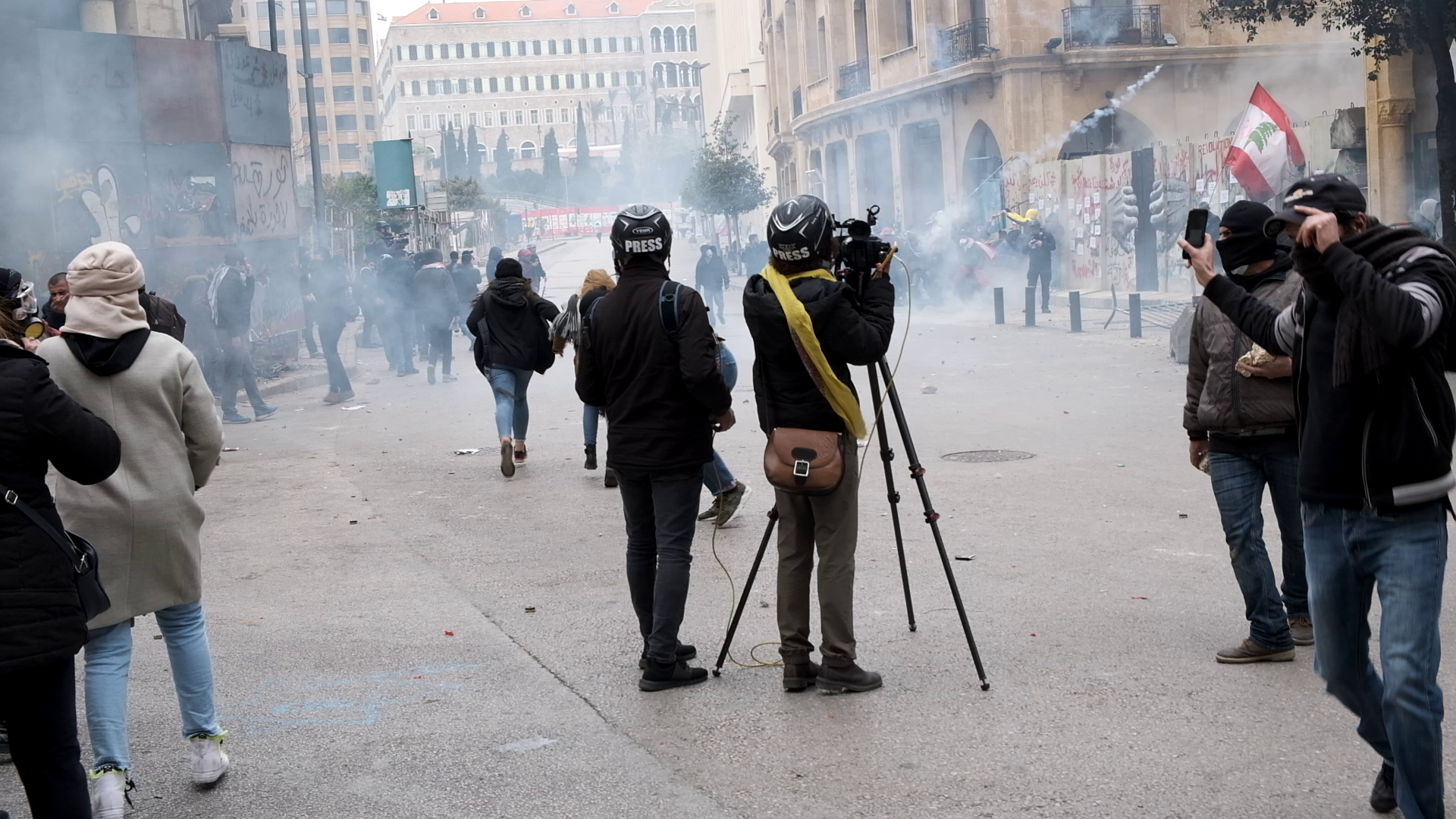 Journalists covering an anti-government protest near one of the blocked entrances to the Lebanese Parliament in the capital Beirut. Photo credit: Hassan Chamoun, used with permission.

Since the anti-austerity protests broke out in Lebanon on October 17, 2019, reporters and journalists have been flocking to the scene to provide up-to-date coverage.

Tens of thousands of people reflecting Lebanon’s diverse religious and class sectors took to the streets to demand social and economic reforms. What started as socio-economic protests have grown into a movement demanding the fall of political rulers who have governed the country under a sectarian political system since the end of the civil war in 1990, using the popular slogan, “All of them means all of them.”

Journalists and camera crews who showed up at the protests became the target of harassment not only by the country’s police and army but in some cases — protesters.

Media professionals have raised their voices against the use of excessive force against journalists who cover the mass protests. Many said they were harassed or had their equipment confiscated, or both. The SKeyes Center for Media and Cultural Freedom at the Samir Kassir Foundation (SKeyes) reported multiple incidents of injury and harassment of journalists from the Lebanese Broadcasting Corporation (LBC), Murr Television (MTV), Agence France Presse (AFP) and Al-Jadeed on January 18 alone.

In one incident reported by Skeyes center on January 15, 2020 freelance journalist Saada Saada was covering a roadblock staged by protesters in the Furn al-Shubak area in Beirut, the capital, when a couple of soldiers started to beat him. He declared that he was a journalist and presented his press identification card, but soldiers reportedly tried to snatch his phone from his hands as they dragged, kicked and beat him. His injuries demanded medical attention and transfer to a local hospital.

In another incident on January 22, a correspondent for France 24, Leila Molana-Allen shared a video in which she says the police targeted a camera crew with water cannons:

Just got hit by water cannon myself after riot police turned the cannon on a group of journalists and onlookers filming the scene.#LebanonProtests https://t.co/x2eXL7dtfO

On January 21, SKeyes reported that an Associated Press photographer was pepper-sprayed by the police as he was covering protests in Beirut:

On February 11, the same organisation reported that another journalist was hit with a rubber bullet.

This treatment also extends to activists who report from the ground and express their views about the protests. This puts almost every active citizen at risk of harassment or arrest. Political expression on social media is getting more popular but also more risky, as several independent journalists and activists face interrogation or physical violence and threats for sharing their opinions on their social media profiles.

When the protests started, activist and blogger Joey Ayoub was one of many who headed to the scenes of the protests to report what he witnessed. On October 25, 2019, when he was recording on his mobile phone, a soldier tried to snatch the phone away, in an attempt to stop him from filming.

You can hear Ayoub tell the soldier in Arabic, “I have the right to record.”

This is problematic not only because it violates freedom of expression and freedom of the press, but also because digital media and content creators on digital media platforms are not protected under the Lebanese press law.

The current press law — adopted in 1962 and amended in 1977, 1994 and 1999 — covers print media only. Cases concerning broadcast journalists and content creators on digital platforms like web outlets and social media are dealt with under criminal law. As social media becomes increasingly more widespread among youth, activists and even officials, Lebanon has yet to adapt its legislation to expand protections to freedom of expression online and digital media.

Police have reportedly taken away phones of people they arrest and force detainees to give up their passwords to grant authorities full access to their devices.

Mohamed Najem, the executive director of Social Media Exchange (SMEX), a digital rights advocacy group working in the Arab region, told Global Voices that his organization received complaints and reports of cases of protesters having to leave their phones behind even after they have been released, and police stations asked them later to go back and give them the passwords to their phones.

Najem says this issue has not gotten the attention it deserves yet and has called for a law that protects the personal data and the privacy of citizens:

We really need a law for data protection in #Lebanon. After the release of protestors, the security agency kept the protestors phone in custody and now asking them to give their phone passwords. This is a breach of privacy, and laws are not protective. #LebanonProtests

Protests are ongoing in different parts of Lebanon, as the parliament approved a new government on February 12. Protesters, who have been calling for an independent transitional government and new parliamentary elections, see this government as part of the old political establishment.

As the protests continue, journalists and activists remain at risk of arrest, harassment and physical violence.

SMEX has circulated tips to help activists and journalists minimise risks to their privacy during protests. The Committee to Protect Journalists (CPJ) has put out a list of steps and measures journalists should take before heading out to cover the protests — including logistical planning and things to pack —to digital security and privacy protection.

These tips and precautions are useful for journalists and activists seeking to protect their right to privacy and avoid harassment and attacks as they report on the ground. However, unless the Lebanese authorities put strong measures in place to ensure the protection of press freedom and freedom of expression, violations will continue to take place.