These boat schools bring up the level of school attendance 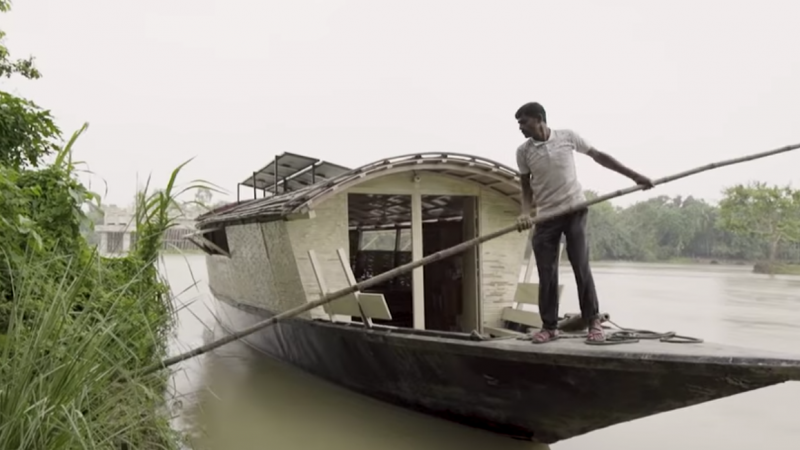 Shikkha Tori, which literally means ‘the boat of education’, is an innovative program by non-government organisation BRAC that allows children living in some of the most flood-prone and low-lying regions in Bangladesh to attend boat schools.

One-third of Bangladesh, especially its northeastern areas, is only one metre above sea level. These wetlands, locally known as haor, become vast stretches of water during the monsoon season and remain flooded for around 7 to 8 months a year. During this season, roads are submerged leaving students from poor families without access to traditional schools.

However, non-profits such as Shidhulai Swanirvar Sangstha, and later BRAC, began introducing boat schools as a way to bring the classroom to the children. These boats also serve as a water bus that pick up students directly from their homes.

The idea for the boat school came to Mohammed Rezwan, founder and executive director of Shidhulai Swanirvar Sangstha, because of a childhood memory. He grew up in a region prone to flooding and was only able to get to school during the monsoon season on a boat his family-owned. However, many of his childhood friends were not as fortunate.

I thought, if the children cannot come to school because of floods, then the school should go to them by boat.

With aid from organizations like the Global Fund for Children and the Bill and Melinda Gates Foundation, the first boat school set sail in 2002.

The number of primary school-going students in the country is over 9 million, while the total number of government and non-government primary schools is only around 110,000. The country's wetlands are home to around 20 million people, and it is an area where less than 1% of the population complete secondary school.

BRAC, the largest NGO in Bangladesh, also began running boat schools in 2012 as a part of their education project.

Floating schools by Shidhulai Swanirvar Sangstha have reached over 80 thousand students since the program's inception, and BRAC's boats have reached 14 thousands more. Both of these initiatives played a role in bringing up the level of school attendance.

While these schools may not take place behind the four walls of a traditional classroom, students from these programs have proven to be as competitive as other students in the country.

Some BRAC boats house mini-libraries, science corners, and feature laptops with internet connection while some Shidhulai Swanirvar Sangstha boats have rooftop solar panels that power the boat at night and allow working students to attend class.

Teachers are recruited from the local community and are trained to talk to students about their mental and physical growth, the effects of climate change, and different ways to protect the environment.

To overcome this, one local charity has decided to take the classrooms to the students in the form of schools on boats. This boat is one of 23 floating year-round schools in this part of #Bangladesh run by Shidhulai Swanirvar Sangstha, a local nonprofit group. pic.twitter.com/z6MO9smkfl

HundrED.org shares an article about the boat schools:

“BRAC Boat Schools are the product of a simple yet powerful idea: if children living in isolated areas cannot go to school, then the school should go to them.” @BRACworld transforms the lives of children in regions prone to flooding. Find out how! https://t.co/nqTxkJgA4D pic.twitter.com/Cd9FK4Dmo8

The concept of boat schools has now been taken up by other developing countries such as the Philippines, Cambodia, Nigeria, Vietnam and Zambia.