#OustDuterte trends as Filipinos criticize government's response to the coronavirus 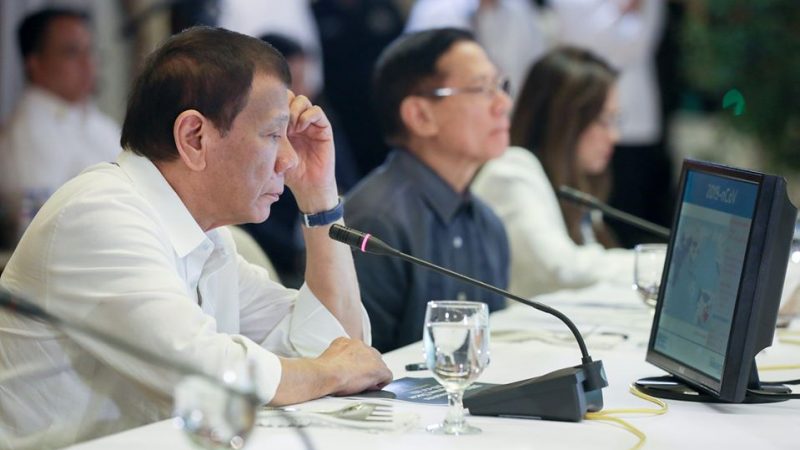 Philippine President Rodrigo Duterte during a crisis briefing on the COVID-19. Photo from Facebook page of Presidential Communications (Government of the Philippines)

#OustDuterte became a trending topic on Twitter as Filipino netizens expressed their outrage over the perceived indifference and lack of decisive action by the government of Philippines’ President Rodrigo Duterte in response to the 2019 novel coronavirus (COVID-19) crisis.

As the COVID-19 scare sparked the panicked buying of face masks, rubbing alcohol, and hand sanitizers, many people started to notice Duterte's silence during the unfolding crisis. Presidential spokesperson Sal Panelo made excuses by saying that the president was just reading in his hometown Davao. The presidential spokesperson also rejected the idea that the government will provide free surgical masks to vulnerable communities, arguing that there is no more supply of masks. As reports of the first confirmed COVID-19 case in the country came out, Duterte was further denounced for failing to recognize the urgency of the situation when his personal assistant, Senator Bong Go, announced that the president would meet with medical experts and public health officials after one week.

Public concern over the COVID-19 is heightened by an awareness of the dismal state of the country’s public health system, which has suffered from successive budget cuts that have deprived much of the poor majority access to free public health services. These are just some of the #OustDuterte tweets:

To those saying that nCov got too much hype here than other countries, that people are creating panic and criticizing the gov't for lack of action: We are not China. We are not Canada. We are not Japan. We are in the Philippines and WE. ARE. POOR. Let that sink in. #OustDuterte

Did you know that ever since the Duterte admin cut the healthcare and PCSO budget, chemotherapy funding for people is now rendered insufficient?

How to prevent Corona Virus?
1. Proper hygiene
2. Stay indoors as much as possible
3. Use face masks daily
4. #OustDuterte

#OustDuterte is now trending number one in the Philippines. Fight the real enemy. To rebel is justified. pic.twitter.com/8KgJ8X7sjb

As of February 11, 2020, there have been three confirmed cases of the COVID-19 in the Philippines. One of these patients died, the first COVID-19 death outside China, while the two other patients have recovered. The Philippine Department of Health (DOH) has investigated 382 patients, with 266 remaining admitted to hospitals and 111 discharged but under daily monitoring for symptoms. Health officials also say that 59 close contacts of the first three confirmed COVID-19 cases in the country are now also suspected of carrying the infection.

Duterte’s seeming initial reluctance to take drastic travel ban measures also reinforced public sentiment that his administration prioritizes relations with the Chinese government over the welfare of Filipinos. By January 29, Duterte himself insisted that there will be no temporary ban of entry of flights from China, saying this would be unfair to the Philippines’ neighbor to the north: “Not yet at this time. As a matter of fact, there is no known transmission from human to human [in] China.” Before this, Health Secretary Francisco Duque also expressed reluctance about temporarily preventing travelers coming from the virus’s country of origin citing “diplomatic repercussions” of any such action.

Duterte belatedly gave in to public pressure to impose a ban on travelers from Hubei province in China. The temporary travel ban was subsequently expanded to include mainland China including Hong Kong and Macau. This ban was further expanded to include Taiwan despite protests by the latter that it is an independent nation and not a part of the People’s Republic of China.

While the COVID-19 scare has indeed unearthed deep-seated racial prejudices among Filipinos, the Duterte administration has surprisingly started criticizing “xenophobia” against the Chinese people to justify government’s lackadaisical response to the crisis.

Many netizens have pointed out that Duterte’s sluggish response to the COVID-19 outbeak is reminiscent of the administration’s incompetent handling of recent calamities like the January 2020 Taal volcano explosion. Duterte tried to cover up his late public appearance in the wake of the eruption by making his trademark sensational puns, this time about eating volcanic ash and peeing on the volcano.

The Duterte administration has been particularly aggressive about tightly controlling the narrative online, using trolls, bots, and cyber attacks on critics to manipulate public opinion. It is wary that online sentiments might spill over to protests on the streets. Outrage over the anomalous Priority Development Assistance Fund (PDAF) during the term of President Benigno Aquino, for example, led to the #MillionPeopleMarch protests.

Civil society groups have begun using #OustDuterte as the unifying call for street mobilizations on February 25, the anniversary of the People Power popular uprising that toppled the Ferdinand Marcos dictatorship in 1986. They are denouncing the Duterte administration’s corruption, incompetence, being beholden to foreign powers like China, massive human rights violations and wanton abuse of power which inches towards a full-blown dictatorship.