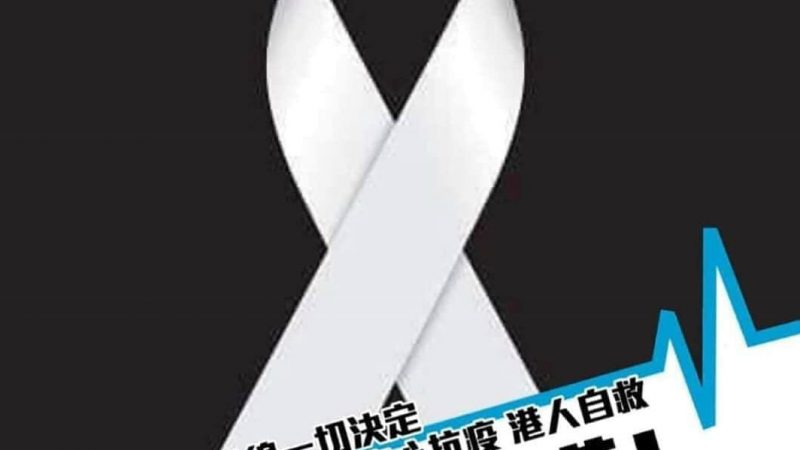 An online poster urging Hongkongers to support medical workers and #saveourselves. Via Twitter.

I live with my husband and 6-year-old daughter in Hong Kong, and for the past two weeks, like many Hongkongers, we have been living in semi-quarantine. We stay home most of the time, work from home, and avoid social gatherings and eating out.

Had the Wuhan coronavirus (now officially known as COVID-19) not taken root in the local communities through human-to-human transmission, we would have hoped to resume normal life in early March. But it seems that this situation of semi-quarantine status will continue for some time. The most recent case is a 19-person family gathering on January 25 that resulted in nine people becoming infected. As of February 11, the total number of confirmed infections in Hong Kong has reached 42.

As the incubation period for the coronavirus is 2-14 days, and the latest findings show that it could extend to as much as 24 days, an outbreak is inevitable. The only way to avoid transmission is to maintain public and personal hygiene and reduce social contact. The Hong Kong Education Bureau announced during the Lunar New Year that all schools would remain closed until March. Universities have shifted to virtual classroom arrangements and many public institutions and businesses are allowing employees to work from home.

The specter of SARS

Seventeen years ago, in February 2003, the first case of Severe Acute Respiratory Syndrome (SARS) entered Hong Kong from Guangdong. By June 2003, 1,750 cases were identified and 286 individuals had died. About 80 percent of the infections could be traced back to the first case.

While the Wuhan coronavirus is not as deadly as SARS, the scale of the outbreak is 10 times bigger, and thanks to the cover-up by the Chinese authorities, mainland Chinese residents were not initially informed of the outbreak and did not, therefore, take protective measures in the early stages.

In early January, we Hong Kong residents tried to alert mainland Chinese netizens of the outbreak, but the online patriots responded by parroting a common conspiracy theory—that Hongkongers were trying to create panic in China so as to undermine the authorities.

Hongkongers had started wearing masks before Lunar New Year, while Wuhan residents were still holding their grand year-end feasts and ceremonies, unprotected. When shops reopened after Lunar New Year, Hongkongers started stocking up on daily necessities in preparation for life under semi-quarantine, anticipating that the virus would not subside until summer.

As we have a child whose school requires that students wear masks whenever their classmates have the flu, we always have a two-month stock of children's masks on hand. Coincidentally, my husband bought a few packs of masks during a recent conference trip to South Korea after Lunar New Year, so we didn't have to line up for hours to buy masks.

As the coronavirus has spread to other Asian countries, a ban on the export of masks has led to a shortage. While the World Health Organization (WHO) has advised that it isn't necessary for people to wear masks unless they have developed flu symptoms, population density in Hong Kong makes it very difficult to maintain the recommended two-meter social distance between people, and in spaces such as apartment building lifts, social distance is reduced to nearly zero.

Macau, a sister city adjacent to Hong Kong which is also subject to China's “One Country, two systems” principle, has adopted a quota policy to ensure that all residents can buy 10 masks every 10 days for the equivalent of 1 US dollar. The Hong Kong government, however, has not only failed to ensure a supply of masks for civilians, but also of masks and other protective gear for medical workers in public hospitals. The Health Authority has only a one-month supply in stock, and the government has to request approval for the export of gear from Beijing, against the backdrop of an even more serious shortage in China.

Also in short supply on the Hong Kong market for the past two weeks are alcohol-based cleansers, bleach, rice and toilet paper. Last week I visited five supermarkets in my neighbourhood and could not find a single pack of rice. Eventually, my husband had to line up outside a supermarket early in the morning to get hold of a pack. In order to get a 500ml bottle of bleach for regular household disinfection, I have to contact my district councillor to get a free-token. Back in January, the majority of district councils approved a budget to buy masks and hygiene products to help tackle the epidemic at a grassroots level. 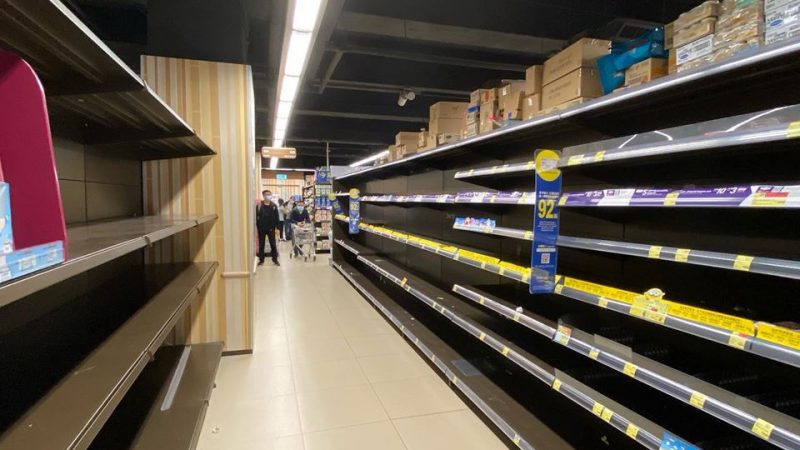 Empty shelves in a Hong Kong supermarket. Photo taken by a friend of the author and used with permission.

The Hong Kong government keeps urging people not to panic, but of course, after the prolonged protests triggered by the anti-extradition movement, few believe that the government has the will or ability to protect the city or to put people's legitimate interests before the political interests of Beijing. Their failure to secure the supply of masks and their indecision around restricting travel between mainland China and Hong Kong are obvious examples of this.

In the eyes of the public, the Hong Kong government is determined only to save themselves, and the hashtag #saveourselves (港人自救）has been widely used on Twitter, Facebook and other social media platforms to criticize the government and to spread information on protective measures such as personal and household hygiene, including a simple chemical formula for home-made alcohol-based cleanser, how to make reusable masks, etc.

In the spirit of #saveourselves, people are also sharing with others in need. For example, after I told friends on Facebook that my family was running out of rice, within 24 hours two acquaintances offered me some of their surplus stock. Organizations with overseas trading connections are helping to channel supplies of masks to grassroots workers, and volunteer groups have taken to social media platforms to urge people to donate their surplus face masks to the elderly.

The determination of the anti-government protest has quickly morphed into a determination to fight against the spread of the coronavirus.

The shortage of daily necessities and the semi-quarantine have made life more difficult for everyone. For families with kids, the outbreak has tripled the daily workload. We now have to care for our 6-year-old round the clock, chase after daily necessities, manage household hygiene, and prepare three meals a day while fulfilling the duties of our regular jobs.

To reduce the use of masks, we don’t go out often. My husband and I take turns going out three times a day, to buy bread and check in on supermarkets and pharmacies in the morning, to take our daughter to the park for a few hours in the afternoon, and to go to the market to buy vegetables and fruit in the late afternoon. The park is half-empty as people are worried about the transmission of coronavirus among kids. I have received friendly warnings on parenting WhatsApp groups about taking kids to the park, but my husband and I have nevertheless decided to let our daughter enjoy a few hours of daily sunshine. We are determined not to let ourselves be overwhelmed by fear, even though the circumstances are rather scary.

What worries me most, however, is the spread of fear and hatred in public discourse, as it can easily escalate into bigoted sentiment against the mainland Chinese. It is clear that the centre of the outbreak is the city of Wuhan and that a number of provinces in mainland China are on the verge of large-scale outbreaks. But while I agree that we should restrict travellers from mainland China entering Hong Kong, and understand when other countries impose similar restrictions on Hong Kong residents, I find labelling mainland Chinese as selfish game-meat consumers and dishonest virus-spreaders completely untenable, especially as it ignores the fact that the majority of travellers entering Hong Kong during the Lunar New Year are local residents returning from their annual family visits in mainland China.

The spread of fear and hatred has also led to a number of extreme not-in-my-backyard-style protests. It is true that the government has not held public consultations about selecting sites for isolating people who have had direct contact with coronavirus patients, and local residents should have the right to voice out their concerns. Throwing petrol bombs to destroy such facilities, however, cannot be justified.

I hope that the fear and hatred directed against mainland Chinese will subside as more human interest stories emerge from Wuhan and Hubei province. Incidents such as the death of Dr. Li Wenliang have reminded Hongkongers that the misery in Wuhan and other mainland Chinese cities is a result of the cover-up of the epidemic by the Chinese government in the name of political stability above all else. Like it or not, the fate of mainland Chinese people and Hongkongers are inextricably intertwined.

I have started talking with my daughter about the outbreak, first by explaining why she has to wear a mask when playing in the park, letting her know that it is not just about protecting oneself but also others, especially the elderly and babies, whose immune systems are weaker and less able to resist disease. I also told her the story of Dr. Li Wenliang and how he was arrested for spreading rumours when what he had said was in fact true.

Stick to the truth and be empathetic to others, I tell her. This is the way to #saveourselves.