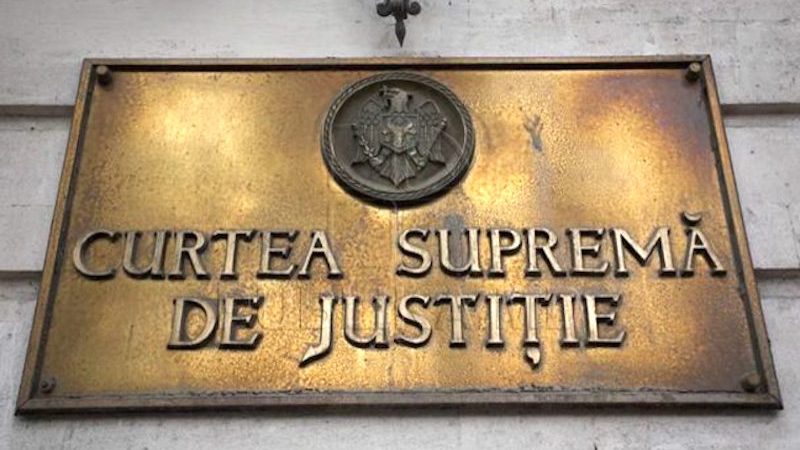 Plaque of Moldova's Supreme Court of Justice in Chișinău. Photo by Agora.Md. Used with permission.

Last month, Moldova's government announced “extensive consultations” on a new draft strategy for justice reform. The cabinet of Prime Minister Ion Chicu, which took office last November, has called on all stakeholders to involve themselves in the intense debates on the issue in Moldovan society. Another chapter begins in the country's eternal, but as yet unfulfilled, promises to set up a truly transparent, professional, and accountable justice sector.

Any Moldovan politician who has come to power in the last 10 years has declared an independent judiciary their priority. For example, in 2011 the country engaged in an ambitious, complex reform package aimed at reforming the entire judicial system at once. An agreement was initially reached to secure at least €60 million of external financial support, in the hope of setting up a rejuvenated and accountable judiciary by the end of 2017.

However, almost 10 years later, that plan has produced uncertain results. Or “only an empty shell,” as a 2019 report from the International Commission of Jurists put it. Endemic corruption, political control, selective justice, a lack of judicial integrity and poor law enforcement have all become part of this bleak picture along the way, thanks to the steady rise in oligarchic governance. Public trust in the justice system has continuously decreased, dropping by half over the past 16 years. According to the Public Opinion Barometer, by the end of 2019, 65% of the Moldovan population did not trust the judiciary.

When EU officials announced that they were freezing the last tranche of funding for the reforms (worth €28 million) in October 2017, they declared that “the Moldovan authorities have not proved sufficient determination.”

There are reasons why Moldovan politicians make promises they either cannot or do not intend to keep. Judicial reform is popular: a good opportunity to win votes or to undermine opponents’ records. “Justice is a very convenient topic, much easier to manipulate than commitments for the economy, for instance. To a great measure, political will has determined justice here… It's not the case where rule of law is first determined in theory and then is put into practice, but the other way around,” explains Dionis Cenusa, a Moldovan political analyst and researcher at the Institute of Political Studies at the Justus-Liebig University in Giessen, Germany.

What hope is there that Chicu's plans will end up any differently?

A window of opportunity

The reformist government of Maia Sandu was no exception to these trends. Sandu's government took office in mid-June last year, after ousting the ruling Democratic Party of Moldova (PDM) and its leader, the oligarch Vladimir Plahotniuc, and forming an “anti-oligarchic” coalition with the Party of Socialists (PSRM), informally led by President Igor Dodon. “We are all trapped in a vicious circle with a lack of justice, and if we do not resolve this, we will have no chances,” said Sandu soon after becoming prime minister. “2019 was crucial as it provided a window of opportunity when state power was slightly diluted, due to the fact that Plahotniuc’s and PDM’s influence over the justice system had faded for a short period of time and no other politician or party had yet got full control over it. For the first time in several years, Moldovan society saw a diversity of voices coming from the justice system”, remembers Nadejda Hriptievschi, head of the Justice and Human Rights Programme at the Legal Resources Center in Chișinău.

Once the priority was set, problems soon arose. The appointment of a new, independent prosecutor general became the major sticking point for the unstable coalition between Sandu's pro-European ACUM block and Dodon's pro-Russian PSRM. The contest for the pre-selection of candidates for the head of the prosecutor's office, launched by the Ministry of Justice, was canceled by Sandu's government in November 2019 after it was concluded that the results were “defrauded by the member of the commission designated by the Socialists”, who allegedly underrated the best and overrated the weakest candidates for political reasons. “The contest proved that for the Socialist Party and its de-facto leader, Igor Dodon, a truly independent judiciary, including the appointment of an independent prosecutor general, is an eminent danger,” says the attorney Ștefan Gligor, who was one of the candidates in the contest.

Shortly after the cancellation of the contest, the government adopted a law that empowered prime minister Sandu to select the best candidates herself and propose them for a final appointment by Moldova's council of prosecutors. “We stood firm on the position of prosecutor general because it was clear that without a truly independent and powerful prosecutor's office we could not reform the judiciary. The criminal files that end up on the judges’ desks come from the prosecutors, and because the prosecutors have not done their job so far, the fraud in the banking sector, the ‘Moldovan Laundromat’ and many other schemes were made possible. There are positions for which the government must take responsibility, as citizens demand reforms and results. The judicial reform was the key element for which ACUM had risked coming to power and if the reform could not have been done then, it would have no longer been worth remaining [in power],” explains Olesea Stamate, former Minister of Justice in Sandu’s cabinet.

After harsh accusations were traded between members of ACUM bloc and the Socialists, the latter, backed by PDM members of parliament, managed to dismiss the Sandu government in November 2019. “From a political perspective, it was the right decision. The assumption of responsibility exposed the PSRM and Igor Dodon, uncovering the falsehood of his declared intent to promote the rule of law and the deoligarchisation of the state,” adds Gligor.

With the old government ousted, and a new one appointed soon after, the new Minister of Justice Fadei Nagacevschi recognised the results of the disputed contest. Alexandr Stoianoglo, a former deputy and vice president of the parliament representing the PDM, became Moldova's new prosecutor general on November 29. Stoianoglo left politics in 2014 and claims that from that moment, he has never been a member of a political party. Nagacevschi himself used to be the lawyer for the PSRM, and before arriving at the Ministry of Justice held the position of advisor to the speaker of the Parliament, the socialist politician Zinaida Greceanîi. Nevertheless, the government under which both men serve has declared itself to be “technocratic,” and its leader Chicu is a former adviser to the president Igor Dodon.

Under the socialists, judicial reform has taken the form of a new three year strategy “for ensuring the independence and integrity of justice sector.” Experts who have analysed this document say that it is far from a comprehensive response to the sector's many challenges. “There is no word about state capture and the role of the justice system in that respect; no word about selective justice and serious issues related to corruption and integrity among the main players of the system; no references to problems like closed court hearings, selective anonymisation of court judgments, quality of education of judges and other professionals, the lack of qualified court personnel and so on. It does not include a clear statement of the problem and does not tackle the human factor which is the main problem in the justice system. If you don't recognise these problems, you can’t really solve them,” argues Hriptievschi.

The draft of the strategy was sent to the Council of Europe on January 3, together with a project proposal for the evaluation of judges — a key mechanism that would filter magistrates to exclude those known to be corrupt and lacking credibility. The draft of the proposal was immediately criticised by members of the opposition. “According to the draft law which was recently made public, the external, genuine evaluation of judges has been replaced with an internal evaluation, using already existing mechanisms… Citizens are waiting for a genuine reform, whereas the Socialists produce one typical of Plahotniuc,” stated Maia Sandu during a press conference on January 20.

Sandu was referring to the fact that, the project proposes a monitoring committee be created by parliament (where the PSRM and the PDM have a combined majority), which would consequently select members of the board for evaluating judges. The majority of the board's members would be current magistrates. “In essence, it is an evaluation of judges by judges, by their colleagues. Moreover, members of the board would not be the first ones to go through an integrity filter, there is no mechanism for them to be checked,” explains Olesea Stamate. “With this format, influence peddling or corruption of the evaluators on behalf of those to be evaluated is inevitable,” adds Gligor.

Gligor adds that the proposal is completely lacking a comprehensive evaluation of prosecutors and criminal prosecution officers, which he stresses was “Plahotniuc's most important tool in eliminating political competitors and in usurping power.”

“Given that the PDM is targeted in the [PSRM-ACUM coalition's] declaration on the captured character of state institutions, as well as the fact that several members of the faction are in thee inner circle of the oligarch Plahotniuc, these people are the least interested in reforms which would have given judges, prosecutors, and criminal prosecution officers any real independence from politics,” concludes Gligor.

“In fact, to read between the lines, what is wanted is a total subordination of the judiciary to the current government,” says Stamate.

In response to such criticism, minister Nagacevschi has suggested that the project proposal is at the stage of a draft, and that the initiatives it contains will be debated on a large scale. Nagacevschi has given reassurances that he will accept any well argued criticism. “Everything can be debated. This proposal is extremely flexible and everything can be changed,” stated Nagacevschi in an interview with channel TV8 on January 21.

Even so, experts are now concerned that a long awaited attempt at genuine judicial reform seems to be compromised — yet again. “The reform of the justice system is in trouble and this is because of a lack of trust in the Socialists, who do not show the will to clean up their image. No truly noble reform can be initiated and brought to an end by political forces that have serious issues with integrity. Such forces may carry out pseudo-reforms, which may change some arrangements, but by no means produce an optimal final result in the public interest. If the author of a reform is not credible, neither is the reform,” concludes Dionis Cenusa.

Editor's note: GlobalVoices contacted Moldova's Ministry of Justice for comment but had received no response by the time of publication.