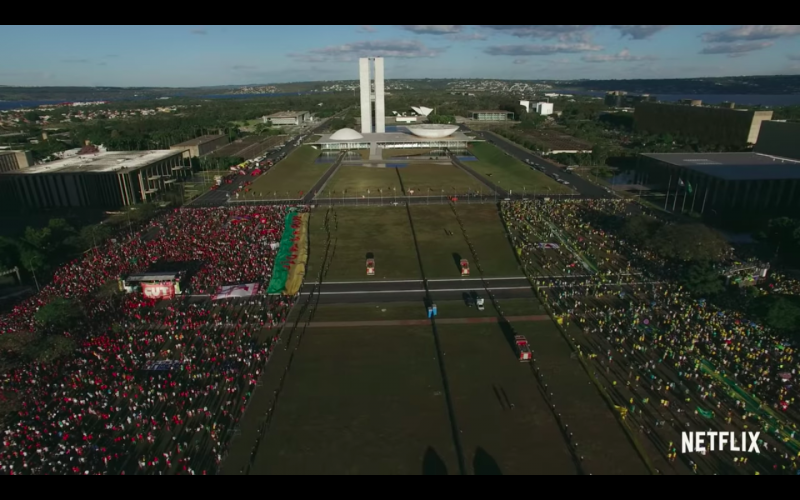 Protests pro and against Dilma Rousseff's impeachment in 2016 in front of Brazil's Congress. Photo: Screenshot by The Edge of Democracy trailer/YouTube

Since its premiere on Netflix in June 2019, film director Petra Costa’s documentary “The Edge of Democracy” has fueled the flames of Brazil's unending polarization. Opinions about the movie tend to fall neatly on political party lines — those who liked it are leftist radicals, those who didn't are Bolsonaro fanatics who supported a coup d'état. That kind of oversimplification is largely what the political debate amounts to in Brazil 2020.

Costa tells the story of the divisive events surrounding the impeachment of former president Dilma Rousseff in 2016, while delving into the recent history of the country's young democracy, from the end of the military dictatorship in the 1980s, through the election of former union leader Luiz Inácio Lula da Silva in 2002, and finally the ascension of Bolsonaro.

Debates about the movie had been long buried by the daily tsunami of political news here, but they emerged again, with full force, last month when the Academy of Motion Picture Arts and Science nominated it for an Oscar of best documentary.

On February 3, the official Twitter account of Jair Bolsonaro’s communication office posted a video of Costa’s interview with U.S. TV channel PBS while calling her an “anti-Brazil militant:”

In the United States, filmmaker Petra Costa took the role of an anti-Brazil militant and is defaming the country’s image abroad. But we are here to show the reality. Do not believe in fiction, believe in facts.

Experts heard by Brazilian legal news outlet Conjur diverged whether the tweet violated any norms. Some say it breaks the impersonality principle of public institutions, while others claim that, even if it did, the tweet would still be within limits of freedom of speech. Congresswoman Maria do Rosario — who has a history of clashing with President Bolsonaro — filed a complaint with the Public Prosecution's Office about the tweets.

Before that, President Bolsonaro himself had said the movie was “fiction” and “crap,” while his youngest son, Congressman Eduardo Bolsonaro, called Costa “a scumbag.”

Dilma Rousseff's official Twitter account published a thread defending Costa, and saying that “there is no one else more “anti-Brazil” today, and more harmful to the country’s image abroad, than President Bolsonaro himself.”

If “The Edge of Democracy” wins best documentary on February 9, it'll be the first Oscar awarded to a fully Brazilian production (co-productions with other countries have won the awards before).

The personal is political

As the granddaughter of the founder of one of the largest construction firms in Brazil — and one embroiled in the Car Wash operation –, and the daughter of leftist militants who fought against the military dictatorship (1964-1985), Costa tells the story of Brazil's democracy as a backdrop of her own personal life.

The narrative is sympathetic towards the Workers’ Party, who ruled the country after winning three elections from 2002 until Rousseff's impeachment in 2016. It subscribes to the idea that Rousseff was ousted by a parliamentary coup led by the opposition for minor charges (accounting trickery that hid the size of a growing debt) when compared to corruption scandals many of those congressmen were themselves entangled.

Costa indeed had access to the upper echelons of the party — she managed to film Dilma's moving out of the presidential house and used exclusive footage by Lula's personal photographer.

At the time when the movie was launched, the media questioned Petra’s mother‘s relationship with Lula’s family, which is not fully disclosed in the movie. Revista piauí, a Brazilian monthly magazine, identified that a forensic photograph from 1976 used in the movie had been digitally altered. The photo shows Pedro Pomar, an anti-dictatorship guerrilla fighter and Costa's parents mentor, laying on a pool of blood floor after being killed by the military police. In the movie’s version of the image, a shotgun and a revolver that were near his body had been erased.

To piauí's reporters, Costa claimed she was waiting for someone to pick up the detail. She said she digitally removed the firearms because they had been planted by the police to incriminate Pomar and others who were killed. Indeed, there is plenty of public documentation backing the claim that the authorities planted the weapons after the killings.

The documentary as experience

Many of the film's critics say Costa is biased, while many others praise Petra precisely for incorporating her personal point of view. Journalist Renato Terra, in an article to Folha de São Paulo, said:

The good documentary, I’ve learned it, is the one that provokes an experience. The idea that a documentary has to be impartial, didactic, informing, has long been overcome. The genre that has evolved the most, the one that allows for most innovations, that values creativity the most, is the documentary.

Costa herself has pinned a tweet with a video in which filmmakers such as Jane Campion and Wim Wenders, with actor Tim Robbins, praise her film:

Here Jane Campion, Wim Wenders and Tim Robbins talk about our #TheEdgeofDemocracy and the global crisis of democracy. So much gratitude for their generosity! @timrobbins @NetflixFilm @JuliaPacetti @jojonata pic.twitter.com/sDHOGw0VjA

Among Costa's critics is former president Michel Temer’s marketing chief, who announced he is also preparing a version to the impeachment story that will be named “Plot against democracy”.

Abroad, Petra's film is seen as “a warning for democracies worldwide” (CNN), as a powerful film that “charts the state’s descent into populism and the fraying of its democratic fabric” (The Guardian), as “an outraged and heartbroken look at Brazil” (The NY Times) or as “heartfelt, unforgettable requiem to Brazil’s broken democracy” (The New Yorker Magazine).

About the attacks coming from an official government institution, Costa said:

The Brazilian government used its Secretary of Communication official account on social media to attack me calling me an anti-patriot. This is yet another step towards authoritarianism, in face of which we should not remain silent #TheEdgeofDemocracy https://t.co/4rJ9VmRNsy