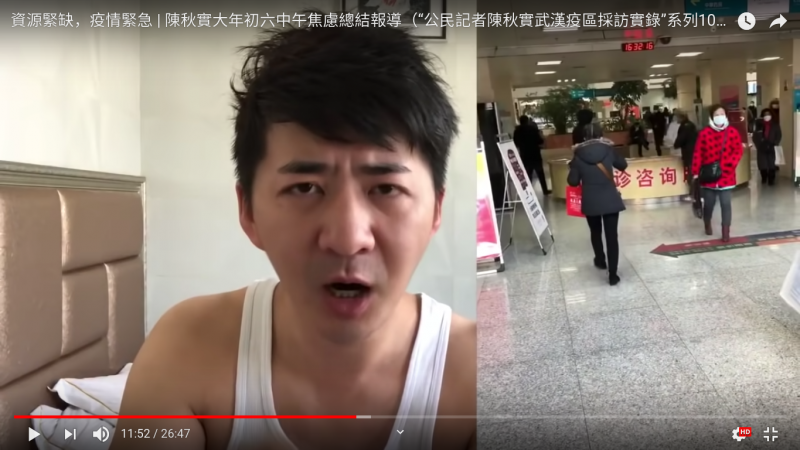 Former human rights lawyer and well-known citizen journalist Chen Qiushi arrived in Wuhan city, the center of the coronavirus outbreak, on January 24, 2020, to report from inside the quarantined city.

Although the first case of the coronavirus emerged on December 8, Chinese media outlets only started covering the news on December 31, and the real scale of the outbreak came on January 20 when prominent Chinese pulmonologist Dr. Zhong Nanshan admitted [2] that the outbreak had entered the human-to-human transmission stage. After Beijing announced Wuhan's city-wide quarantine on January 23, the independent journalist circle was worried that no one would report on the situation in the sealed city.

Chen built his reputation by covering the Hong Kong protests in August. Though he was harassed and silenced [3] by Chinese authorities after his trip to Hong Kong, he continued speaking out using Twitter and Youtube.

Below is a summary of his reports from the center of the epidemic outbreak from January 24 to February 2.

January 24: Information should travel faster than the virus

After arriving in Wuhan around 10 pm, [4] Chen urged citizens to contact him via WeChat and promised to report on the real situation in Wuhan. He anticipated that the national security police would go after him and made three public promises: 1. He would not spread rumors, would not create social panic and would not cover up the truth; 2. He would protect himself and would not reach out to patients who were in serious condition; 3. Until the outbreak is under control, he would not leave Wuhan even if he caught the virus. He stressed that the spread of SARS (17 years ago) and the Wuhan coronavirus was due to a cover-up of the virus outbreak [5] and the Chinese people should not repeat the same mistake; information should travel faster than the virus.

January 25: A visit to the Wuhan Central hospital

Chen's WeChat account was suspended for one month after he published his January 24 video. According to WeChat’s notification [6], he was accused of spreading rumors and other illegal content.

At 2 a.m., Chen visited [7] the Wuhan Central hospital where he found a relatively uncrowded emergency ward of 30 patients. Before noon, Chen was forced to check out from his hostel as local authorities handed out the order that hostel operators should not accept non-local residents.

Chen also visited a number of friends in Wuhan, one of them made a DIY face mask:

Today I visited a few friends in Wuhan. They took me to Jinyintan hospital. Just managed to talk to the doctor and could not enter the hospital. I was impressed by courage and optimism of the Wuhanese.

January 26: A dead body at Wuhan No.11 Hospital

Chen interviewed [10] a nurse from Wuhan No.11 Hospital who said that the situation was far better than before the lunar new year when the ward was flooded with thousands of patients. At that time, the government was not providing any assistance and medical workers were left without basic protective gear. Instead of going through official channels, the hospital was forced to make public appeals through social media. The nurse also denounced some government efforts to ‘fact-check’ social media saying: “They claimed that the video showing three dead bodies from the Wuhan Red Cross Hospital was fake. I told you, they were really corpses, though we could not verify if they died because of the coronavirus.”

Chen expressed his worries about human-to-human transmission inside the hospital as all the patients shared the same ward. He noted that the hygiene outside the hospital was also pretty bad — used masks, gloves, and vomit were everywhere.

Chen expressed frustration about the lack of citizen initiative to help each other out during the crisis: “Everyone is divided. They keep complaining and arguing about government policy but can’t even volunteer to help receive and distribute the resources sent from outside of Wuhan.”

Chen also mentioned how current affairs writer Wang Yajun was threatened by the Hubei authorities over his comments about the outbreak.

Chen helped deliver medical [12] supplies and food to the Wuhan Union Hospital in the morning. He then visited the Huoshenshan hospital [13] construction site, one of the two hospitals Beijing vowed to finish within 10 days.

At night, he interviewed a Wuhan citizen who criticized the local authorities [14] for failing to alert local residents about the outbreak and their lack of public support for the quarantined city on the first day of the Lunar New Year. The young man compared Wuhan to hell: people could not take public transportation to the hospitals and no one answered the emergency line. Even if the patients managed to go to the hospitals, they were only given anti-inflammatories. The majority were not tested if they had been infected with the virus and were told to quarantine themselves back home.

Chen visited the Wuhan No.5 hospital [14] and there were about a hundred people. A nurse broke down and screamed out in the hospital car park as she was infected at the hospital but could not get a bed in any hospital. Rumors spread online saying that the hospital had a number of medical workers infected but doctors were ordered not to talk to media.

January 30: Identified cases were not confirmed

Chen said [15] his name and face were blocked on WeChat, and any distribution of his video could result in a WeChat ban. He said that taxi drivers had been aware of the virus outbreak since mid-December. According to sources from a Wuhan taxi driver chat room, there were 20,000 taxis in Wuhan and only 6,000 were in operation during the quarantine. Residents had to contact district administrators to arrange a taxi.

Chen attempted to visit [16] a family which had four confirmed infected patients. Two were hospitalized and the 84-year-old mother passed away in the morning. The son was confirmed infected on January 23 but there were no beds available. Chen eventually could not pay the visit to this family as the residential district [17] was locked down with guards standing in front of the gate.

The first one showed [18]large crowds outside of a pharmacy attempting to buy a Chinese medicine called “shuanghuanglian.” On January 31, The Chinese Academy of Sciences [19] released a report in The People Daily News claiming that the medicine could repress viral replication. While the medical experts admitted that there wasn’t any clinical evidence about the effectiveness of the medicine, panicked shoppers bought up all the medicine from the market.

The second one [20] showed national security officers disguised as disease control officers visiting Wuhan citizen reporter Fang Bin late at night claiming that they suspected he was infected. On January 31, Fang Bin uploaded a video taken from Wuhan No.5 hospital which showed how corpses from the hospital were sent to a funeral house and he believed that was the real reason for his arrest.

Fang was released  [21]the following day and talked about the incident via Chen’s Youtube channel. The police had accused him of creating social panic.

Both Fang and Chen were trying to dig into the stories about the death toll of the Wuhan coronavirus. Chen visited the Hanhou Funeral Home on January 29 and found out that within a period of 1.5 hours four vehicles had entered the funeral home, a designated cremation center for bodies infected with the coronavirus. On January 31, Fang Bin found out that a vehicle parked at the entrance of the No.5 hospital was loaded with 8 bodies.

During Fang’s arrest, law enforcement officers claimed that they needed to quarantine Fang as he had been in contact with the infected. On February 2, a new administrative regulation was released stating that the disease control officers were authorized to take away any individual who was in contact with the infected. Chen pointed out that the new regulation could be used as an excuse to arrest citizen reporters, including himself. He urged others to speak out [22] for themselves.

Check out Global Voices’ special coverage of the impact of the Wuhan coronavirus [23].