Bengali, Pakistani, and Amazon indigenous women perform ‘The rapist is you’ song

Three months after it emerged out of the Chilean protests, the feminist flashmob is still making waves 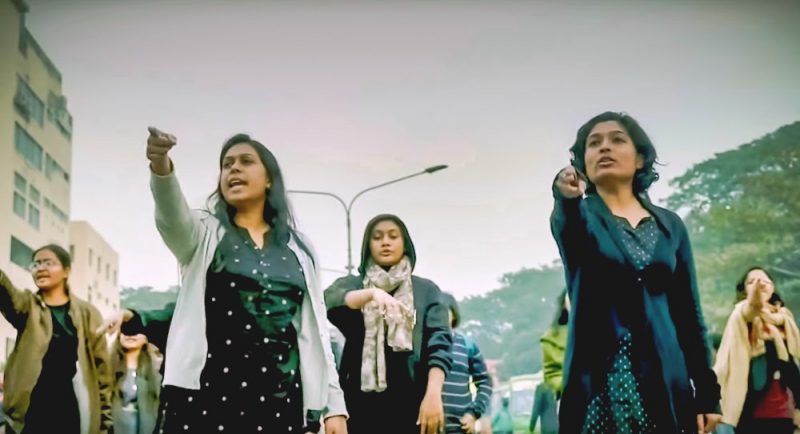 The viral feminist flashmob “The rapist is you” (“Un violador en tu camino”) born in Chile is still making waves all over the world as it inspires women to protest sexual harassment and abuse.

One of them was in Bangladesh, where over a thousand people protested against the rape of a Dhaka University student. Many protesters performed the Bangla version of the song “The rapist is you”.

The fault wasn’t mine, nor where I was, nor what I said, or nor how I dressed
The fault is yours, the rapist is you 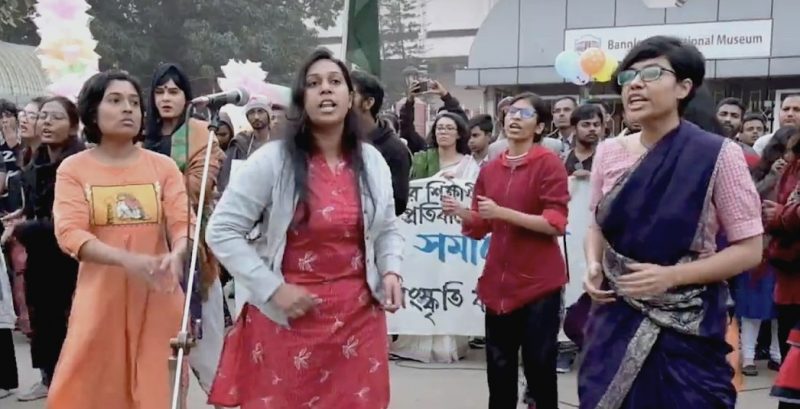 The protest happened on January 6 in front of the Bangladesh National Museum adjacent to the campus.

Around 500 cases of rape and abuse had been filed in the Dhaka metropolitan area in 2019.

This online TV channel did a music video with the Bangla song playing over performances in different countries. Clips of the performances were not broadcast in Bangladeshi mainstream media, but went viral on social media.

On another video, some of these students were seen performing the same song in different places and at different times:

The Bangladesh Police have since arrested a suspect of the rape incident.

From Chile to the world

“The rapist is you” became a feminist anthem after Chilean women danced and sang the choreography by feminist collective Las Tesis on November 25, 2019, amid mass protests against economic inequality that erupted the month before.

There have been wide reports of police abuse during the protests. The song, which had been written before the demonstrations began, was a feminist response to that violence as nearly 17 percent of filed criminal complaints against state authorities concerned sexual abuse, according to Human Rights Watch.

The flashmob inspired women in Mexico, Colombia, Kenya, India, and all over Europe and the United States to denounce similar patterns of violence.

This performance was made by Kichwa, Shuar, Waorani, Achuar and Shiwiar indigenous women of the Ecuadoran Amazon:

The flashmob was based on the work of Argentinian feminist and professor Rita Laura Segato, who inspired Las Tesis to show that “rape not just as a crime against an individual woman, but the expression of a larger social issue,” as reported by Quartz.

The song therefore targets institutional pillars — “the police, the judges, the state, the president”, as lyrics say — as accomplices of gendered violence.

This transnational feminist response in the form of a song proposes solidarity and empathy in turbulent political times. It’s calling for an acknowledgement of sexual violence as a systemic and global problem in democratic institutions that, ironically, were created to prevent it.

For Spanish journalist Marta Borraz, the song also relieves women from self-blame when falling victim to sexual violence when the lyrics say “it’s not my fault, nor where I was, nor what I wore:”

The performance focuses on the impunity of sexual violence. It has become a collective cry that occupies public space, like a catharsis that is able to concentrate multiple sensations in order to change how things, especially guilt, are perceived.

In Kolkata, New York, and Karachi

“The Rapist is You” was also sung in protest against visits of high-level politicians. On January 8, 2020, an Indian feminist collective performed the song in Kolkata as part of the widespread protests against Prime Minister Narendra Modi’s visit to the city.

Aopala Banerjee, one of the performers, told Scroll.in that the group “wanted to highlight the patriarchal violence that Modi’s idea of a Hindu Rashtra (Hindu Nation) represents.”

Recently, women in New York City performed the anthem outside of where Harvey Weinstein, the former Hollywood movie producer accused by nearly 100 women for sexual abuse, stands trial for rape.

In Karachi, Pakistani women of the AuratMarch2020 movement performed the song in Urdu. They are calling for people to join them on March 8, 2020, International Women's Day, to march “for economic, reproductive, environmental justice, and the right to our city,” as mentioned on their Twitter profile.