Barbadian poet Kamau Brathwaite leaves behind a legacy of language

"He has passed into the consciousness of our civilisation" 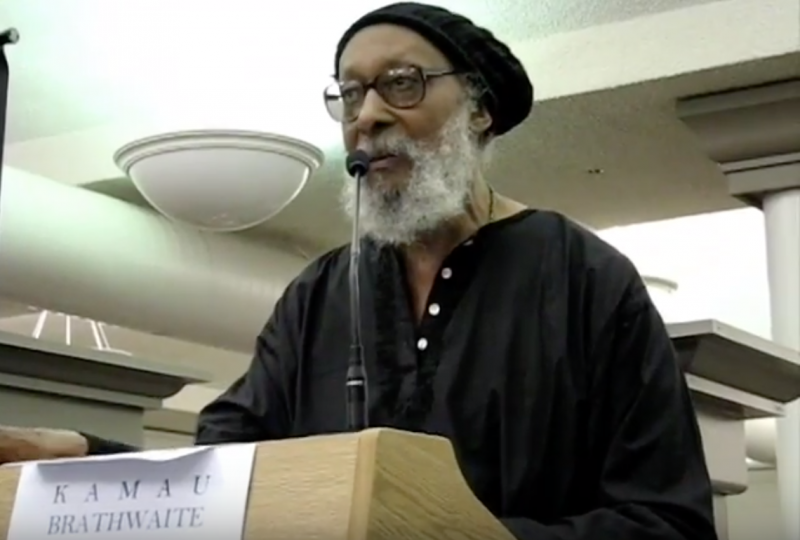 Barbadian poet Kamau Brathwaite reads his poem “Calypso” at “Calypso” at the University of Virginia in April 2008. Screenshot taken from a YouTube video uploaded by RJ Ramazani.

The esteemed Barbadian poet Kamau Brathwaite, whose unique voice was universally recognised as an integral part of the canon of post-war West Indian literature, died on February 4, 2020, at the age of 89.

Born Lawson Edward Brathwaite, his evolution to Kamau Brathwaite — that deliberate pairing of his chosen African first name with his given Briton surname — is representative of the space he carved out for the two to coexist. His work, known for its innovating “Creolisation” of language, was integral in helping to forge a sense of regional identity in the painful aftermath of slavery and colonisation. Alongside writers like Derek Walcott and V.S. Naipaul, Brathwaite helped raise the Caribbean voice to reach the ears of the world.

He got his start through Frank Collymore‘s bold literary magazine Bim, which allowed emerging writers’ work to be read alongside more established, published West Indian authors. The blog Memo from La-La Land suggested:

But if it was [Frank] Collymore’s encouragement that kept alive the poetic vein in Brathwaite, it was his time in the Gold Coast (modern day Ghana) from 1955 to 1962 that built the vivid image in his mind of the close relation between the African and the Caribbean experiences. In my view, Brathwaite’s lifelong quest rests upon the premise that Caribbean culture is intrinsically connected to African culture, not by means of an ethereal or genetic connection, but through an active transformation of the social norms that took place over more than three centuries of slavery […]

In a region where, decades later, there is still a debate over the use of “proper” English versus the loaded phrase “dialect”, Brathwaite coined the term “nation language”, which he defined as “the kind of English spoken by the people who were brought to the Caribbean, not the official English now, but the language of slaves and labourers, the servants who were brought in.”

His intelligent and loving defence of this hybrid as not just valid in terms of language, but integral to Caribbean identity, inspired many other West Indian writers, including Sam Selvon and Louise Bennett. What it also did was place stock in the value of the region's oral tradition, through which many African customs were upheld and passed on over the course of the transatlantic slave trade.

Brathwaite claims through his poetry that orality – speech – is king. […] For instance, in 1992 Brathwaite published a selection of poems, mostly from his first two trilogies, ‘The Arrivants,’ (1972) and ‘Other Exiles’, (1975), except at this stage he had discovered the advantages of working on a computer. This led to the development of his ‘Syncorax video style’ texts, which is another way of describing the usage of various font styles and sizes throughout the book. The changes occur both within a poem and from poem to poem and the spectacular graphic effect lends itself to being discarded as an aesthetic caprice, or an ode to the wonders of technology. Upon second scrutiny, however, it becomes evident that the graphic innovations are, in fact, included to highlight, to reproduce, the natural emphasis and modulation that pertain to Caribbean speech.

Once his passing was announced on social media, regional netizens began sharing their remembrances. Posting the words of his poem “Calypso”, Barbadian multi-media artist and curator Annalee Davis said on Facebook:

I remember his lecture at Frank Collymore Hall many years ago — that very beautiful lilt in his voice, a rhythm that could only have come from Barbados, and a most unique way of using his very own tongue that honoured who we are. […]

His use of nation language and the breadth of work he produced leaves an indelible mark on us all and I know that people around the Caribbean and its diaspora will mourn his passing as we will in Barbados.

The country's prime minister, Mia Mottley, paid homage to Brathwaite as “easily one of the titans of post-colonial literature and the arts”, while the George Padmore Institute described him as “one-third of the pan-Caribbean trio of founders of the seminal Caribbean Artists Movement” (the other two being Trinidadian John La Rose and Jamaica-based Andrew Salkey).

Kamau was versatile and always interesting. He wrote a most important book about Creolisation, discoursed extensively on ‘nation language’ which he demonstrated brilliantly in his poetry, and was the prime influence in the region's eventual discovery of its potent folk and oral traditions. His work and his theories fed on the subterranean links between the Caribbean, Africa and the African diaspora, and it was especially sensitive to the music, rhythms and imagery of African-American culture. […] I have never wavered in my admiration for his passionate interest in our culture and society, his revelation of his native Barbados as root and bright symbol and the unceasing formal experimenting in his verse. It is consoling that like Walcott and [Wilson] Harris he is not lost to us, since he has passed into the consciousness of our civilisation.

Kamau Brathwaite was also an academic and well-respected educator; he studied at the University of Cambridge's Pembroke College and holds a Ph.D. from the University of Sussex. He was a recipient of both Guggenheim and Fulbright Fellowships and published many books about African culture and identity.

His time spent in Ghana as an education officer greatly impacted his understanding of the black experience. Some of his important academic works include “Folk Culture of the Slaves in Jamaica,” (1970), “Afternoon of the Status Crow”, (1982), and “History of the Voice”, (1984), in which he put forward his theories on nation language. He also had professorial stints at New York University and The University of the West Indies.

Well-recognised in the literary world, Brathwaite was the 2006 international winner of the Griffin Poetry Prize, for his collection “Born to Slow Horses”. He also won the Neustadt International Prize for Literature (1994), the Gold Musgrave Medal for Literature from the Institute of Jamaica (2006), the Poetry Society of America's Robert Frost Medal (2015) and the PEN/Voelcker Award for Poetry (2018).

As much as his scholarly writings chronicled the post-colonisation Caribbean experience, however, it is Brathwaite's poetry that captured the imagination of both the region and the world. In the words of Facebook user Richard Drayton:

[I]t was as a poet/shaman that his name will be forever resonant whenever Caribbean [people] try to make sense of themselves.