Strong responses on Twitter claim the book is insensitive, superficial, and stereotypical 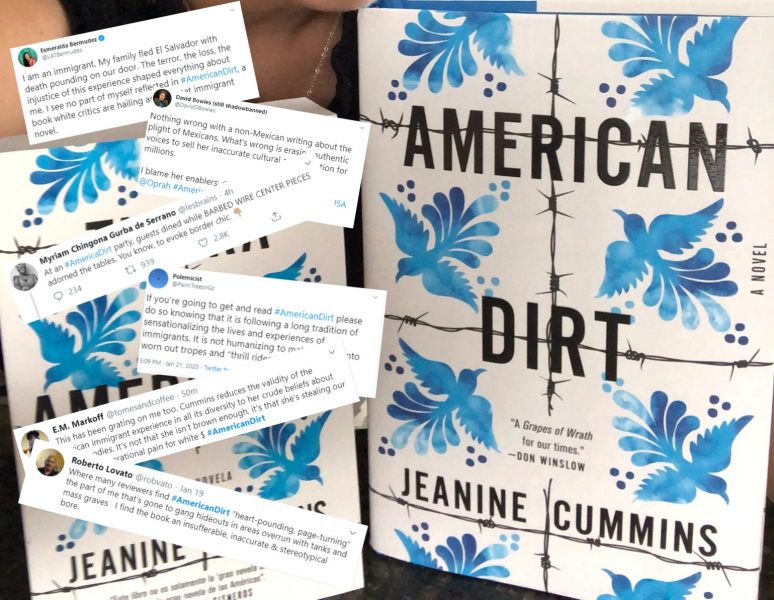 Collage made by Melissa Vida with extracted Twitter posts and the front cover of “American Dirt” by Jeanine Cummins, pulled from the author's Twitter @jeaninecummins

The novel tells the story of a Mexican mother, Lydia, who, fleeing violence in Mexico, moves with her son to the United States. It has been acclaimed by renowned authors such as Stephen King and Sandra Cisneros, as well as literary critics and Oprah Winfrey (who picked it for her famous book club). It was published in English by Flatiron Books, which reportedly acquired the book for a seven-figure deal, and has already been translated into Spanish and Bulgarian. A film adaptation is allegedly being discussed.

The author Cummins explains in the book's afterword her reason for writing it, where she also admits that “someone browner than me” should have written it.

At worst, we perceive [migrants] as an invading mob of resource-draining criminals, and, at best, a sort of helpless, impoverished, faceless brown mass, clamoring for help at our doorstep. We seldom think of them as our fellow human beings.

Cummins, who isn't Mexican and identified as white in 2015, had then said in her Twitter profile that she is “Irlandaisa [sic]/Boricua/Persona” and has a grandmother from Puerto Rico.

On Twitter, strong responses claim the book is insensitive, superficial, and misrepresent Latin American communities in the United States.

#Americandirt is now an @oprahsbookclub selection. As a Mexican immigrant, who was undocumented, I can say with authority that this book is a harmful, stereotypical, damaging representation of our experiences. Please listen to us when we tell you, this book isn’t it.

A Guatemalan- and Mexican-American vocal Twitter user who goes by the name Polemicist rues the book's sensationalism of the pain of immigrants.

If you’re going to get and read #AmericanDirt please do so knowing that it is following a long tradition of sensationalizing the lives and experiences of immigrants. It is not humanizing to make people into worn out tropes and “thrill rides.”

Many people retweeted a review by author Myriam Gurba that was published in the academic medium Tropics of Meta. The review was originally slated to be run on a feminist outlet who pulled it after claiming Gurba was not famous enough “to pen something so ‘negative’,” she herself said.

In her article, Gurba says that “italicized Spanish words like ‘carajo,’ ‘mijo,’ and ‘amigo’ litter the prose, yielding the same effect as store-bought taco seasoning.” She adds that the story of Lydia isn't credible because the character seems to be constantly surprised by the violence that torments Mexico.

That Lydia is so shocked by her own country’s day-to-day realities, realities that I’m intimate with as a Chicana living en el norte, gives the impression that Lydia might not be…a credible Mexican. In fact, she perceives her own country through the eyes of a pearl-clutching American tourist.

Gurba criticizes how the novel lacks mention of any political causes for migration, and shared book titles by Latinx writers on her Twitter account.

You don’t have to be Latino/an immigrant or write about immigrants. I’ve had white mentors who I respect because they’ve worked hard to see past their limitations, to understand the community. The problem is the book arena is ruled by white writers, agents, critics, gatekeepers. pic.twitter.com/t15XoyY9ij

She said that because of this inequality, stories written by Latin Americans about their own experiences are erased and not frequently found on bookstore shelves.

In an industry where Latinos make up only a tiny percent, our stories are often rejected, shrank down, manipulated, misunderstood, stolen, appropriated, exploited, sanitized, repackaged for easy consumption by white audiences. Most of all, our stories are silenced — invisible.

After Esmeralda Bermudez's Twitter thread took off, she said that Jeanine Cummins blocked her, which gives the impression that the author is not open to having a dialogue with the community offended by her novel.

Adding insult to injury, Flatiron Books prepared a launch party for “American Dirt” in which the guest table was adorned with false barbed wire, a reference to the book's cover, but also to the walls that separate the United States and Mexico. Illustrator John Picacio called the piece “Mexploitation:”

It appears that criticism of the novel is not due to slow anytime soon.

Correction: A previous version of this story stated that Cummins signed a deal with Flatiron Books of “over 100,000 USD.” We've updated the story with a more accurate figure. We apologize for the error.