The world of satire in Myanmar's comical profiles Facebook group

These creative profiles attempt social commentary through satire and humour

A Facebook group in the language of Myanmar, created on 21 January 2020, gained over 240,000 members in less than a week — but many of those members have profiles that were created mere hours before joining the group. This follows a trend, whereby users create profiles pretending to be historical or fictional characters in order to talk about satirical or comical things in modern society.

The group's name, ကုန်းဘောင်ကြီးကြော် (Kung Pao Kyi Kyaw), refers to a popular Chinese stir-fry dish called Kung Pao — but it is also a pun on Myanmar's historical Konbaung Dynasty, which is spelled using the same letters in the Myanmar alphabet as the ones used to spell Kung Pao. The Facebook group is public, so anyone can join; its purpose is merely to make people laugh through satire. However, users must adhere to rules: they are banned from posting pornography and from using racist hate speech.

Many new profiles have been created pretending to be a variety of things including technology (a phone, Facebook), commodities (beer), concepts (afterlife), or current trends (Wuhan virus). Contexts are often automatically understood by a shared culture because they make reference to situations that are relatable in real life. If they are a historical character, for instance, they might make references to past events or fictional worlds. On the other hand, some profiles — like Myanmar or Phone — are posting as if their identities are alive and conversing with actual Facebook users. Many of the creative posts attract thousands of reactions from users.

Here are some of the popular examples from the group: 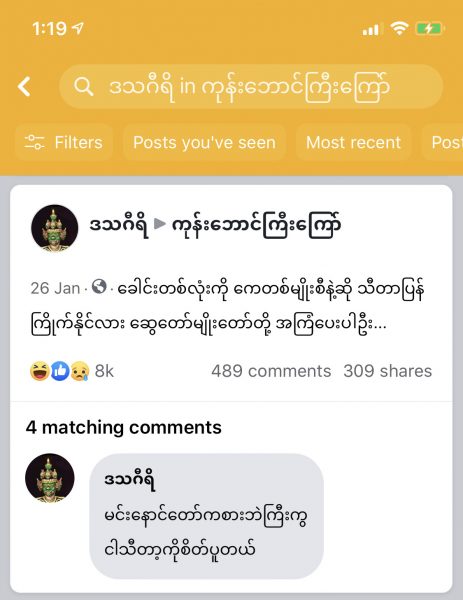 A profile named Dasagiri, a love-sick warrior king with multiple heads (Ravana) from the Myanmar adaptation of the Sanskrit epic Ramayana, wrote as if he was talking to his love interest, the princess Seetham: “If each of my head has different hairstyles, then will Seetha love me back? My royal family, advice!…” 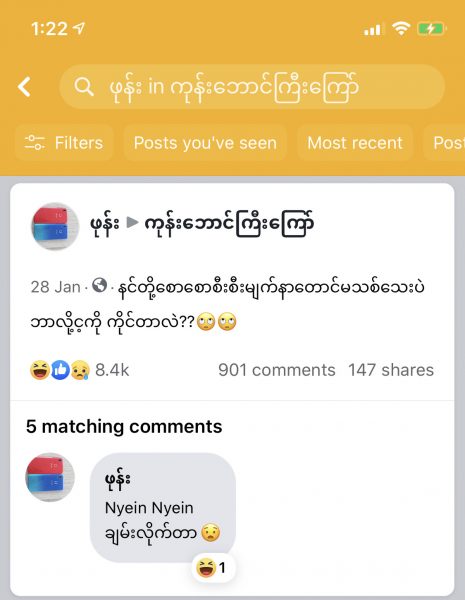 The profile “Phone” writes, “Why are you touching me early in the morning, even before you wash your face??” 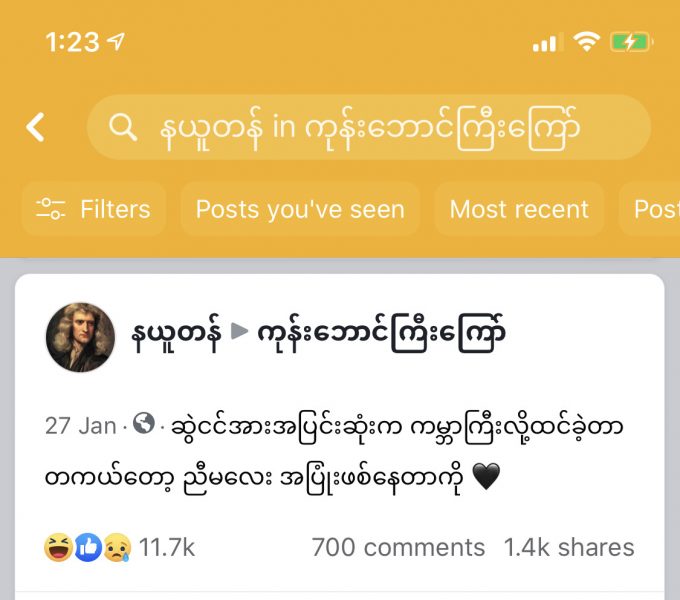 Another profile with the name “Newton”: “I thought the strongest attraction is the Earth but actually it's my girl's smile.”

As the trend gained momentum, with new profiles being created every hour, it seemed as if there was a spike of non-real identity accounts on Facebook. This might raise some eyebrows for Facebook, whose community standards demand that users create authentic profiles with their true identity.

Recent research shows that a majority of social media users in Myanmar use Facebook for a variety of different functions such as microblogging, searching for information, or forming an online community; rather than just purely for social networking and communications. Therefore, the research said that users do not need to use real identity for these functions. Contrary to the standards of the platform, users in Myanmar can have multiple accounts to serve different purposes, but this does not mean that their intention is necessarily malicious.

Amidst the disinformation and hate speech that is often spread by numerous, unidentifiable Facebook accounts, this trend poses a puzzling question. Facebook has previously taken down several accounts linked to the Myanmar military, and banned those related to the ultra-nationalist icon Wirathu — but will it allow the seemingly harmless, comical, and imaginary profiles on the Kung Pao Kyi Kyaw group to thrive to freely express on its platform, or will it also order their removal?