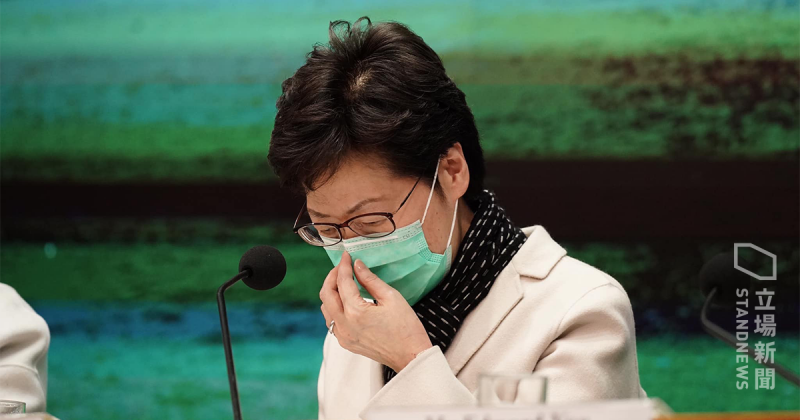 The following post is originally written by Kris Cheng and published on Hong Kong Free Press on February 1, 2020. It is republished on Global Voices under a content partnership agreement.

Hong Kong people have been angered by the government’s response to the recent coronavirus outbreak. In a matter of weeks, almost 10,000 people have been infected and over 100 have died in China. And locally, there have been ten confirmed cases as of this week.

The spread of the virus has caused panic around the city, with residents stockpiling surgical masks and food. Meanwhile, mistrust of the authorities has already been building during months of pro-democracy protests and unrest, clashing head-on with the outbreak this month.

Here is a roundup of seven reasons why Hongkongers remain angry with the response by the authorities.

In response to the ongoing protests last November, Chief Executive Carrie Lam enacted an anti-mask law by invoking the 1922 Emergency Regulations Ordinance. Pro-democracy lawmakers filed a legal challenge and the Court of First Instance in November ruled that the law was unconstitutional. But the government decided to appeal, and the case was heard earlier this month.

The result is still pending, though democrats have questioned how the government can be advising citizens to wear face masks whilst simultaneously trying to ban facial coverings through legal means.

Lam has resisted calls to drop the case, saying that the virus outbreak is unrelated.

The government stopped short of recommending that residents wear face masks in the early days of the outbreak, even after the first locally confirmed case on January 22. Three days later, Chief Executive Carrie Lam appeared at a press conference without a face mask.

Although the vast majority of Hongkongers had donned masks on public transport, in scenes reminiscent of the 2003 SARS outbreak, it was another six days after the first case that Lam joined top officials in wearing one to a press event.

The authorities have since recommended that Hongkongers wear surgical masks at mass gatherings and during commutes, despite a territory-wide shortage.

And although Singapore is giving out free face masks, and the Korean consulate is also handing them out to their citizens in Hong Kong, there have been no promises of any similar government-led programme in the city. Instead, Chief Secretary Matthew Cheung has said the focus will be on restoring the supply to retailers.

There were calls to close off the border with mainland China even before the first case of Wuhan virus was confirmed in Hong Kong. But the government only announced measures on Tuesday, January 28 to cut the number of people crossing into the city from the mainland.

A new union of more than 15,000 Hospital Authority employees has threatened to strike if the government does not close the borders with China completely, but Lam’s administration has said such a move would be discriminatory and has not been recommended by the World Health Organization.

Meanwhile, other Asian nations such as Mongolia and Singapore have barred Chinese citizens from passing through their borders.

When the government finally began to close checkpoints, it faced criticism for closing only a handful of minor crossings rather than all of them. Though the high-speed rail link and cross-border trains were halted, as well as all ferry services, the routes only see about eight percent of the daily traffic between Hong Kong and the mainland.

Many visitors are trusted to fill out a health declaration form, though there are fears not everyone will do so honestly.

The government announced that it would provide free treatment for patients who contracted the new virus, saying that it was intended to prevent victims from not receiving treatment owing to the fees.

But the policy was widely criticised as indirectly attracting mainland patients to come to Hong Kong for treatment as the border remained open. The government had to reverse the policy a day later and announce fees for non-Hong Kong residents.

The government said this month that it would use the Fai Ming Estate in Fanling – a public housing estate that has yet to be opened – as a quarantine centre.

As the proposal had not gone through any public consultation and the site was just a street across two other highly populated residential estates, many residents opposed and protested against the plan. During the protest, journalists found that quarantine materials had already been placed inside the estate. Some activists threw petrol bombs at the lobby. Eventually, the government was forced to abandon the plan.

In a bid to encourage its use, the government announced in January that the Hong Kong-Zhuhai-Macao Bridge will be toll-free for small passenger vehicles during the Lunar New Year holidays. The offer extends to February 2.

Although a similar policy was enacted during last year’s holiday period, many in Hong Kong were concerned that the offer would simply attract more mainland patients to come to Hong Kong, causing the virus to spread.