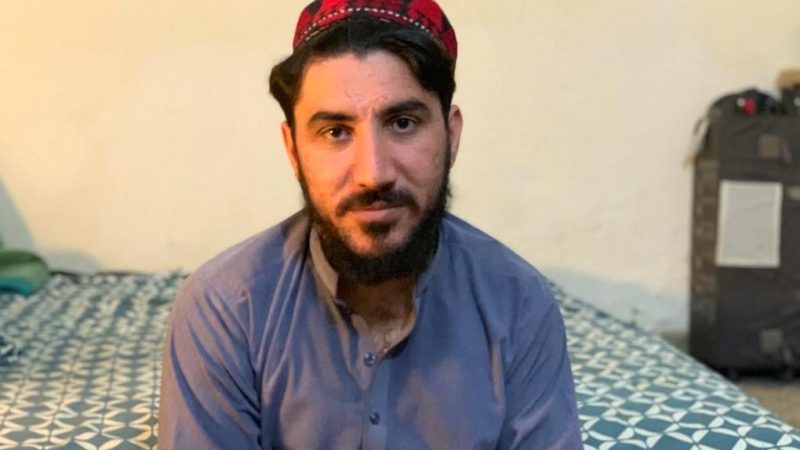 On January 27, 2020, Manzoor Ahmad Pashteen, the young human rights activist from South Waziristan, Pakistan who dared to challenge the country's military over its human rights record, was arrested for alleged conspiracy and sedition.

According to a police complaint lodged against him on January 21, Pashteen is accused of using threatening and derogatory language against the state during a public gathering on January 18.

Who is Manzoor Pashteen?

The son of a primary school teacher, 25-year-old Pashteen has been highlighting the plight of the Pashtun people — also known as Pathans — an ethnic group residing mostly in Pakistan and Afghanistan.

Thirty million Pashtuns, representing 15 percent of Pakistan's total population, are disadvantaged, and anti-Pashtun sentiment prevails in both countries. In the past decade, there have been reports of systematic abuse and enforced disappearances of the Pashtun people by the Pakistani army.

Pashteen leads the Pashtun Tahafuz Movement (PTM), a social movement for Pashtun human rights. Based in the provinces of Khyber Pakhtunkhwa and Balochistan, Pashteen founded the group in 2014. Over the past few years, its members have been facing legal harassment for speaking out for the rights of the Pashtun people, and for calling for justice when it comes to violations against the community.

In May 2019, for example, local members of parliament Mohsin Dawar and Ali Wazir were arrested in North Waziristan on allegations that their supporters had attacked a Pakistan Army check post in North Waziristan’s Kharqamar. They are currently out on bail.

Media coverage of the movement and its activities also faces restrictions; in fact, local television channels avoid covering the movement altogether. In February 2019, Pashteen's interview with The New York Times (NYT), which called for an end to the enforced disappearances and extra-judicial murders of ethnic Pashtuns by security officials was forced to be censored by the military in Pakistan. The NYT's local edition in Pakistan dropped the article and the column with his interview appeared blank:

In May 2018, Global Voices reported how digital outlets that covered the movement experienced disruptions to their websites.

Mohsin Dawar, member of the National Assembly of Pakistan and one of the leaders of the Pashtoon Tahafuz Movement, tweeted:

Last night Manzoor Pashteen was arrested in Tehkaal, Peshawar. This is our punishment for demanding our rights in a peaceful & democratic manner. But Manzoor's arrest will only strengthen our resolve. We demand the immediate release of Manzoor Pashteen.#ReleaseManzoorPashteen

“These arrests are not going to put us down,” Dawar told Global Voices in a phone interview. “This is a sign for recognition of our demands of justice, peace and equality.”

The Pashtoon Tahafuz Movement called a press conference and a peaceful protest to highlight Manzoor's case, as well as the plight of nine others who were arrested with him. However, on January 28, during a demonstration against Pashteen's arrest, Dawar, along with 22 other peaceful protestors, were dragged into police vans and arrested. Dawar was released the following day and the rest of them were sent to Adiala Jail in judicial custody. A first information report (FIR) was lodged against them accusing of different crimes as per the Pakistan Penal Code including “assault on public servants”, “defaming army” and “obstructing public servants from discharging duties” and they were denied bail.

The Human Rights Commission of Pakistan issued a statement:

There is no indication that the protestors resorted to violence at any point, although video footage shows several of them being manhandled by the police. HRCP believes that these actions were unconstitutional and have violated citizens’ right to freedom of expression and peaceful assembly. The arbitrary use of the charge of sedition under an archaic law to curb political dissent – that has in no way incited hatred or violence – indicates how little regard the state has for its citizens’ civil and political liberties.

2. @AmmarRashidT and 22 others protested in Islamabad against Manzoor's arrest –> they were arrested

Professor of political science Aasim Sajjad Akhtar tweeted his support for the 22 protestors still in custody:

Jaqueline Berumen, wife of @AmmarRashidT talking about Ammar's politics.
The moment where Isa yells “I'M MISSING MY PAPA, ACTUALLY!” is just so beautiful it breaks my heart.

Shame on this state for torturing families like this!#ReleaseAmmarRashid#ReleaseIslamabadProtesters pic.twitter.com/4Dpfb0bvih

To survive as an organic, grassroots movement, the PTH depends on social media to spread information, but activists say they are facing ‘suspension’ and ‘legal threats’ from Twitter, a popular social networking site.

Widespread reporting of Twitter accounts is a tactic used by pro-government trolls to silence PTM supporters or anyone else speaking out against human rights abuses in the country.

Twitter suspended accounts of a number of critical voices from Pakistan.
So far 2 journalists that I'm aware of – & now at least 1 intellectual.
They are locked out of their accounts for 12 hrs.
This coincides with a countrywide crackdown on civil liberties & critical voices

Maria H. Malik tweeted about her own experience:

My account was locked for 12 hours because of “questionable tweets”. I come back to Twitter and find more stories of abductions and arrests. Where is everyone who was elected to run this state and look after its people? Is this a joke? @sherryrehman @ShireenMazari1 @ImranKhanPTI pic.twitter.com/O2lgt0DWkf

In 2018, Pakistani authorities threatened to ban Twitter, alleging that the platform had not responded to their requests to block certain ‘offensive’ material. In 2019, Twitter sent notices to a number of Pakistani journalists and human rights activists, informing them that their content was allegedly in violation of Pakistani law.

Update: On February 3, 2020, Monday, a Pakistani court granted bail to 23 human rights activists detained in Islamabad on January 28, 2020 for protesting the arrest of Pashtun Tahafuz Movement (PTM) leader Manzoor Pashteen. The judge also summoned the Inspector General of Police to explain under what authority of law the offence of sedition has been included in the first information report. The activists were released on Tuesday, February 4, 2020, however, Pashteen remains in police custody and faces charges of “sedition.”