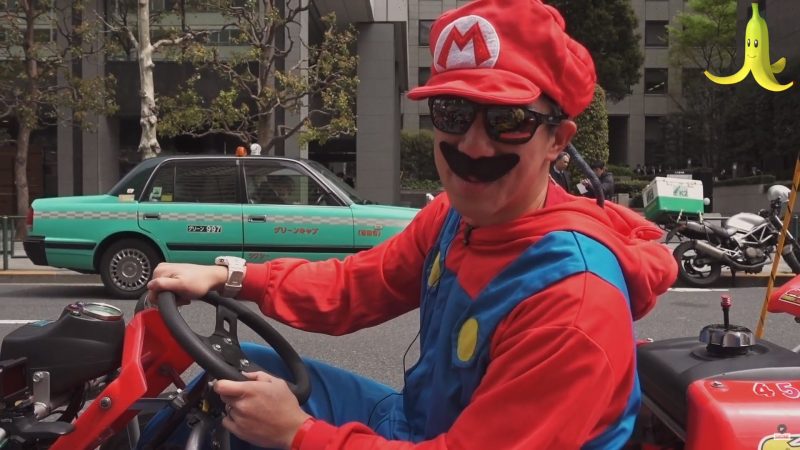 A YouTuber dressed as Nintendo character Mario drives a go-kart on the streets of Tokyo. Screencap from YouTube. The tour operator claims there is no connection with Nintendo.

On January 29, 2020, Japan's Intellectual Property High Court rejected an appeal by a popular Tokyo-based tour operator in a lawsuit that Nintendo brought against his company. Instead, the high court dramatically increased the damages payable to the video game and entertainment giant from 10,000,000 Japanese yen ($100,000 United States dollars) to 50,000,000 yen (US $500,000).

MARI Mobility Development, also known as Maricar, rents out street-legal go-karts in several locations across Tokyo, Japan. Participants have long been encouraged to dress up in costumes provided by Maricart as characters from the popular Nintendo ‘Mario Kart’ series, then ‘race’ through city traffic in fleets of go-karts. Anyone with a Japanese driver's license or international driving permit can drive the go-karts.

According to BengoDotCom, a Japanese news site that reports on legal issues, prior to being sued by Nintendo, Maricar's website stated:

If you dress up as a Super Mario character, it will be as if you are driving a real Mario Kart [from the video game]!

Although Maricar claims it has no connection to or affiliation with Nintendo — “Street Kart is in no way a reflection of Nintendo, [or] the game ‘Mario Kart’,” reads a popup disclaimer on a franchise website — the Kyoto-based video creator of ‘Mario Kart’ decided to take Maricar to court in September 2018. Nintendo argued that, under Japan's Unfair Competition Prevention Act, by using ‘Mario Kart’ characters in marketing materials without permission, Maricar engaged in ‘unfair competition’ (“不正競争行為にあたる“).

A Tokyo court agreed with Nintendo, awarding the video game maker 10,000,000 Japanese yen in damages, to be paid by Maricar that same year. Maricar appealed the Tokyo court ruling to Japan's Intellectual Property High Court, which rejected the appeal in an interim ruling in May 2019, stating that “Maricar's actions infringe Nintendo's business interests” (“MARI社の行為は、任天堂の営業上の利益を侵害する”).

That's a lot by Japanese standards.

Nintendo has been serial-winning cases in recent weeks in Japan and the US.

(There is a reason why in a company portrait a while ago, the Nikkei called Nintendo's department “legendary”.) https://t.co/qpfE6xyVNG

Nintendo has a reputation for being litigious. Around the same time the company won its appeal against Maricar, it also won an intellectual property judgement in the United States, in its long-running fight to ban versions of its popular older games from being hosted online. In Europe, also in January 2020, Nintendo won its legal battle to prevent some customers from canceling pre-orders.

As far as Maricar goes, since Nintendo plans to open a theme park later this year in Osaka that would include characters from ‘Mario Kart’, the existence of a Tokyo go-kart tour company using Nintendo branding — even informally — has the potential to confuse visitors. As well, Maricar go-karts have caused several accidents, and Tokyo locals generally don't like to see them on city streets, the outfit posed a tangible risk to the Nintendo brand:

After seeing the go-karts traveling down the streets in public, locals grew quite angry with Nintendo itself, sending emails and complaints to [the video game company].

While Maricar still offers go-kart tours in Tokyo, ever since the May 2019 interim ruling, the company has taken down its main website and removed costumes and Nintendo-related branding from its different locations. However, the days of Mario and other Nintendo characters driving go-karts on Tokyo city streets still live on in many YouTube videos.