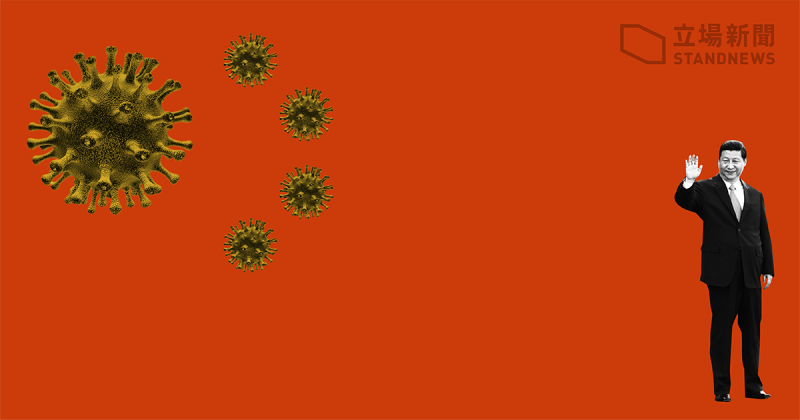 Image from the Stand News mocking the People's Republic of China where the usual yellow stars have been replaced by images of a virus and a photo of leader Xi Jinping on the right. Used with permission.

The Chinese embassy in Denmark demanded that a leading Danish daily Jyllands-Posten apologizes over a cartoon turning the stars on the People's Republic of China (PRC) national flag into images of a virus earlier this week. The cartoon was published on January 27 to highlight the PRC's initial move to cover up the outbreak of the Wuhan coronavirus which has since spread around the world. After the Danish Prime Minister commented on the incident by referring to the country’s tradition of free speech, Chinese online patriots waged an online war to spoof the Danish flag.

As of January 31, there are confirmations of more than a dozen cases of the Wuhan coronavirus in Europe. In China, there are 9,692 confirmed cases, 15,238 suspected cases, and 213 deaths.  Many critics have pointed out that China’s failure to inform its citizens about the outbreak in December 2019 led to this global health crisis. The World Health Organization (WHO) was declared a global health emergency after the new coronavirus spread across the country during the Lunar New Year seasonal travel rush in mid-January.

For many in China, the satirical cartoon of the PRC flag is a matter of hurt national pride. The Chinese embassy issued a statement demanding an apology from the paper on the same day:

Without any sympathy and empathy, [the cartoon] has crossed the bottom line of civilized society and the ethical boundary of free speech and offends human conscience…We express our strong indignation and demand that Jyllands-Posten and [cartoonist] Niels Bo Bojesen reproach themselves for their mistake and publicly apologize to the Chinese people.

However, no apology has been provided and several newspapers in Europe have re-published the cartoon as part of their reporting on the Chinese statement. To China's dismay, Danish Prime Minister Mette Frederiksen commented on the incident by defending the country’s tradition of free speech:

I have nothing more to say but that we have a very, very strong tradition in Denmark not only for freedom of expression, but also for satire drawings, and we will have that in the future as well… it is a well-known Danish position, and we will not change that.

Meanwhile, Hong Kong netizens pointed out that the first “Chinese virus flag” initially appeared on Hong Kong-based news outlet The Stand News on January 23 (see top photo). The online news site went on to publish another satirical image in their coverage of the Chinese embassy’s statement: 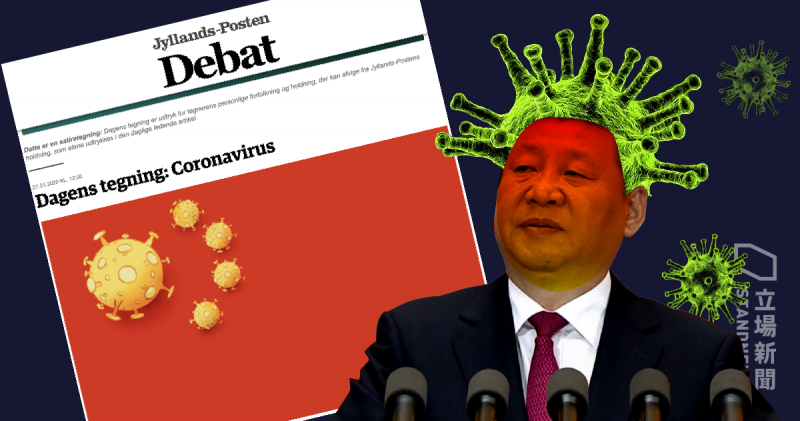 Image from the Stand News, used with permission.

In fact, there have been several political satire cartoons making use of the Chinese national flag online:

‘Denmark is weak and China is strong’

However, for Chinese online patriots, Denmark is in no position to mock China. Here is one Chinese theory circulating widely online:

As Chinese people fight against the coronavirus, the Danish paper Jyllands-Posten published a cartoon to insult China, making use of other people's misery to attract attention and using the rhetoric of “democracy” and “human rights”. This is so hypocritical and low. Comments from overseas Chinese netizens: during World War II, Denmark surrendered to Germany in 4 hours. China fought for 14 years [during the same period]. Denmark is so dumb this time.

Along with such arguments, a large number of images spoofing the Danish national flag have emerged online. Here are some highlighting the “4-hours to surrender” history:

The small country is so fxxking arrogant. To take freedom of speech for real, each of the 1.4 billion Chinese speaks of one sentence, an will make this country learn to cry.

More are making use of the Nazi symbol to insult the Danish flag, the following are just very few examples circulating on Twitter: