So far, 24 communities have been demolished, rendering 50,000 people homeless 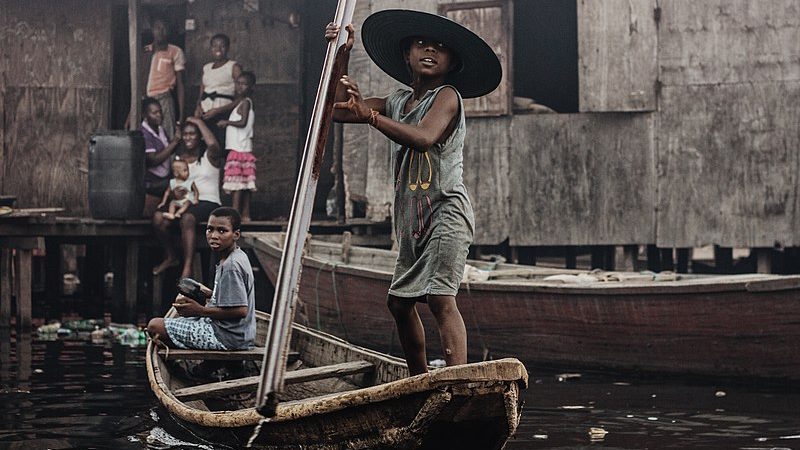 On Tuesday, January 21, 2020, residents of Tarkwa Bay and Okun Ayo waterfront communities in Lagos, Nigeria, were given two hours to leave their homes.

The Nigerian Navy entered both communities and began shooting guns in the air. Initially described to one community chief as a military drill, the aggressive evacuation plan has left about 4,500 people homeless.

BREAKING: Reports reaching us that demolition has begun again at #TarkwaBay this AM, @NigerianNavy moving excavator from #OkunAyo into forcibly evacuated community, destroying houses — RAISE your voice to #SaveTarkwaBay before it is too late cc: @NaijaFederation @AmnestyNigeria pic.twitter.com/FJY7SFiXXa

Several persons reported violence and that at least one resident was shot in the leg and excavators reportedly began working in Okun Ayo community bringing down buildings, with military stationed to stop any entrance to that area.

Netizen A.S. Elijah sounded the alarm on Twitter over the latest evictions:

The Nigerian Navy insists that the order to forcefully evict the residents came from higher authorities — with the goal to stop looting at nearby pipelines — but they did not mention which arm of government had issued the orders or plans to compensate the evictees.

Forceful evictions in Lagos, Nigeria’s most populated city, is nothing new. As far back as 2013, waterfront communities — populated mostly by those in the fishing industry and those who can’t afford to live on the mainland — have been demolished as Lagos continues to evolve as a megacity. As a result, residents were forcefully evicted, with authorization by the Lagos state government.

Authorities have not shied away from expressing disdain toward waterfront communities. These communities have gone without electricity and other essential services for decades. In October of 2016, the Lagos state government threatened to demolish all the makeshift, informal communities around waterways in Lagos.

Law enforcement labels these communities as a public health and safety threat, but to the residents, these spaces are often the last resort for those who can not afford housing elsewhere.

In 2017 and 2018, many residents of the Otodo Gbame and Illubirin waterfront communities on Lagos island were killed or injured during forced evictions ordered by Lagos state authorities. Now, those areas are being prepped for luxury apartments that the average Nigerian cannot afford.

Forcefully evicting thousands of people from their homes (Tarkwa Bay etc) and outrightly banning okadas and kekes that thousands others make their honest living from within weeks of each other.
When the crime rates skyrocket now, they’ll feign surprise. https://t.co/yPwhCeo2Iv

So far, 24 communities have been demolished, rendering over 50,000 people homeless. Many have dispersed and settled on the streets of Lagos. JEI reports that one resident went into labor amid the chaos of evictions at Tarkwa Bay and she and her new baby now live under a busy Lagos bridge:

Janet was pregnant on Tuesday when @NigerianNavy rushed into #TarkwaBay shooting guns & chasing everyone out. She fell down in the chaos & put to bed that night. Now she sleeps outside w/ her newborn at #Agala waterside. Read full story by @SamPhotographs: https://t.co/kaC8CqjG9J pic.twitter.com/xhfQ5Tyauy

The Federal High Court has ordered an immediate halt on all evacuations and demolitions in Tarkwa Bay and Okun Ayo. There’s no telling whether or not the authorities in charge will adhere, but they have a track record of ignoring orders from High Courts.

In June 2017, after two months of rigorous advocacy and protests driven by the residents and human rights activists and organizations like JEI and Nigerian Slum/Informal Settlement Federation, the Lagos High Court decreed that the eviction of the over 5,000 people from Otodo Gbame was a violation of their human rights.

The court ordered the government to pay compensation. After 2 1/2 years, the residents haven’t received an acknowledgment, let alone any compensation from authorities.

Concerned citizens and victims have also physically protested at the Lagos State Governor’s office, but so far, the government has eluded the issue, and any attempt to bring up evictions and demand accountability has been shunned.

Putting waterfront communities on the map

Waterfront communities historically lack official identities and are often not recognizable on maps.

Organizations like Code for Africa and OpenStreetMap believe technology can help protect vulnerable waterfront communities from future evictions, so the duo started a project aimed at giving them identities through the use of drone technology and map-making.

Last year, they launched the project in Makoko — another waterfront community whose residents are worried they could be next. They use drones to photograph and map the community and have trained community members to work with drones to map their area.

The idea, they said, is to put the community — streets, churches, schools, etc. — on the map, so that the government would more willingly acknowledge these communities and perhaps create an inclusive development plan.

Hopefully, with recognizable spots on satellite maps, the High Court’s scolding, and louder-than-ever protests, the government will finally be compelled to respond and begin to see waterfront communities for what they are: people who deserve basic human and state rights.