'If the reporting mechanisms worked, those women would be alive' 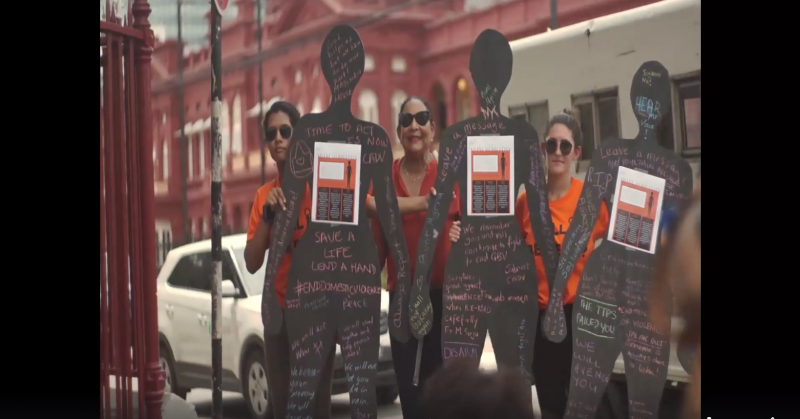 Screenshot taken from a public Facebook video posted by Womantra, chronicling some of the events from ‘Orange Day: Remembrance for Victims of Gender-based Violence’, which took place in Port of Spain, Trinidad, on January 25, 2020.

In the heart of Port of Spain, opposite to Trinidad and Tobago's newly refurbished Red House, is a tree-shaded oasis that, thanks to its history of political oratory and protest, has long been known as “The University of Woodford Square” or “The People's Parliament.”

On January 25, 2020, gender activists converged on Woodford Square to lend their voices to an issue that has been plaguing the country for some time — gender-based violence (GBV).

The event, a remembrance for local victims of femicide, took place on Orange Day — a United Nations observance on the 25th of each month to raise awareness about GBV. 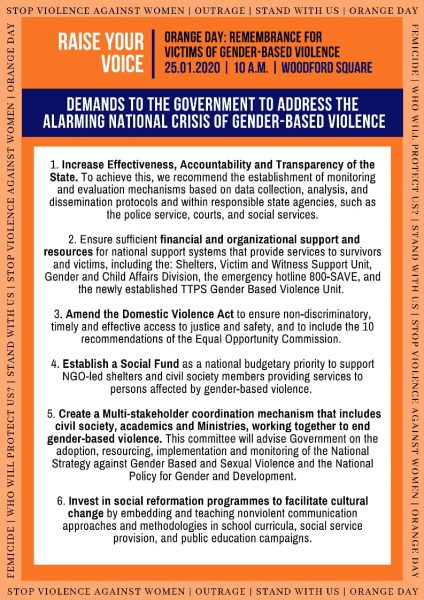 Infographic of the six demands that stakeholders are asking for; these are outlined in their petition to the government to respond to the plague of gender-based violence in Trinidad and Tobago. Image courtesy Womantra, used with permission.

Several civil society organisations and women's rights defenders, including CAISO (which fights for sex and gender justice), Womantra (a woman-centered non-profit), the country's Coalition Against Domestic Violence and Family Planning Association and the Institute for Gender and Development Studies at The University of the West Indies’ St. Augustine campus, came together to honour victims and call on the state to take action to protect the lives of women and girls.

Stakeholders, which number 20 civil society organisations, also circulated an online petition demanding, among other things, increased accountability and transparency in preventing and combating GBV, improved support for the national systems that provide services to survivors and victims, amendments to the Domestic Violence Act, and an investment in social reformation programmes to facilitate cultural change. 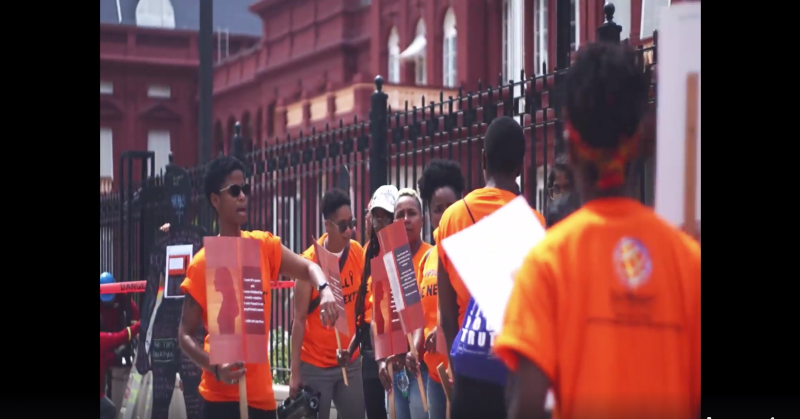 Women's right activists outside the Red House in Port of Spain, Trinidad. Screenshot taken from a public Facebook video, posted by Womantra, which shows different aspects of ‘Orange Day’, a remembrance for victims of gender-based violence, which took place on January 25, 2020.

According to statistics shared at the event, 20 women were killed in Trinidad and Tobago as a result of gender-based violence over the last year alone. However, in January 2020, three femicides occurred in rapid succession, prompting the ‘Orange Day’ action. University lecturer and co-director of CAISO, Dr. Angelique Nixon, suggested some of these deaths could have been prevented, as “people knew” that the women had been threatened: “If the reporting mechanisms worked, those women would be alive.” 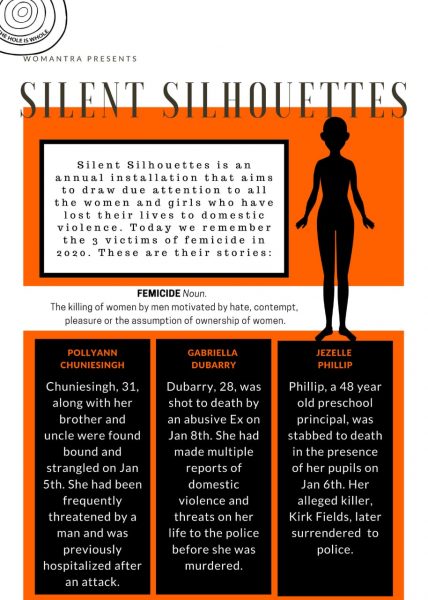 Infographic on the three femicides that took place in Trinidad and Tobago on January 5, 6 and 8, 2020. Image courtesy Womantra, used with permission.

In her own address, Sabrina Mowlah-Baksh, general manager of the Coalition Against Domestic Violence, mourned the women “whose lives have been taken away from them by men whose notions of manhood are tied to the exercise of power and control over women.”

On January 21, just days before the remembrance, The Trinidad and Tobago Police Service (TTPS) launched a new Gender-Based Violence Unit, which will focus on cases of domestic violence and breaches of restraining orders. Noting that giving the police valuable information helps save lives, Commissioner of Police Gary Griffith encouraged witnesses to make reports about GBV.

Shireen Pollard, head of the newly formed GBV unit of the TTPS, was present at the ‘Orange Day’ event.

Victim-blaming and the socialisation of young men

Sadly, a few days after the event, the country lost yet another woman to intimate partner violence — and the Newsday, which headlined the story “Relatives: Killer was pushed over the edge,” was roundly criticised for how it chose to frame the incident:

Don't you dare blame the victim.
Fed up of people making excuses for violence.

This is a deplorable headline and overall deplorable report. Singh's relatives believe that he is the real victim — not the person he murdered in cold blood. 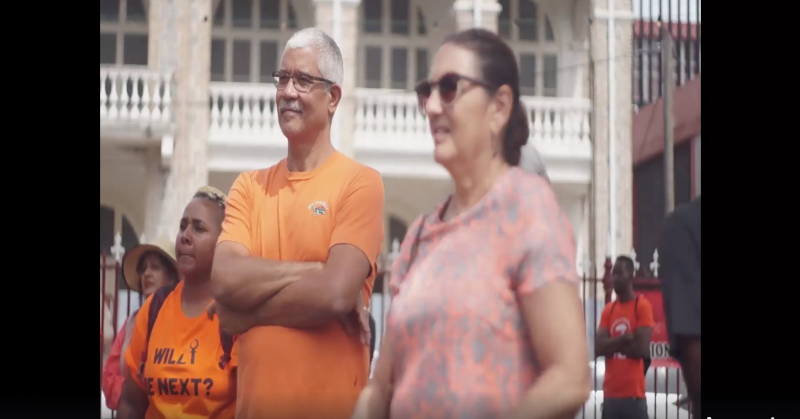 One of the men who attended the ‘Orange Day’ remembrance for victims of gender-based violence in Trinidad and Tobago on January 25, 2020. Screenshot taken from a public Facebook video posted by Womantra.

Several male social media users weighed in as well. Ian Michado Royer posted a list of suggestions for “what do do when pushed over the edge,” adding:

We need to stop enabling toxic masculinity and justifying psychopathic behaviour by victim shaming! If you taught your […] son some real time coping mechanisms and how to be a decent human being he wouldn’t have murdered someone because he was stressed out. #MissMeWithThatBullshit

1. Men and boys need to learn to treat women better (and a lot of that falls to men to teach them);
2. We need to teach our men and boys how to cope in various aspects of their lives:
3. We men need to do more in being our brothers’ keepers.

One of the victim's best friends, Christa Prevatt, also pushed back against the Newsday article and began to advocate in earnest for victims of femicide.

In her weekly Newsday column, Dr. Gabrielle Hosein, who lectures at the Institute for Gender and Development Studies at The University of the West Indies, quite fittingly wrote:

In contrast to the argument of provocation being spuriously promoted, none of these women was having an argument, being violent or abusing the men who killed them. They were only attempting to get up in the morning, go to work and move on. […]

Men’s killing of women is not a response to relationship rejection. These women endured and escaped chronic treat and abuse, in forms which are criminal offences. They didn’t ‘jilt’ a lover. They rejected terror and harm. They left a crime scene. Call it for what it is.

A region-wide call to ‘lock shop’ 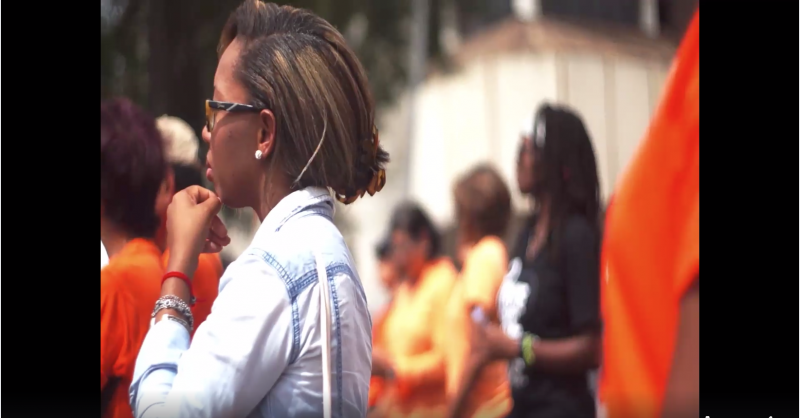 Head of the organisation Women Everywhere, Adeline Gregoire, listens to a speech at the ‘Orange Day’ remembrance for victims of gender-based violence in Port of Spain, Trinidad, on January 25, 2020. Screenshot taken from a public Facebook video posted by Womantra.

Meanwhile, in an interesting twist, activist Nazma Muller, who says “we will not lie down and take this femicide” — has called for a sex strike to protest gender-based violence. One activist in Jamaica has taken up the call, and the story has been picked up by other islands, like St. Kitts and Nevis, as well.

In her announcement of the strike on Facebook, Muller revealed that the concept was based on a successful sex strike that took place in Liberia, helping to end the country's civil war. The regional manifestation of the sex strike, she said, is intended to “starve men into submission and put the cause of women’s rights on the front burner.”

The concept is simple, she explained:

We are doing this to show solidarity with our sisters who are suffering and to raise awareness of our demands for better security and better treatment.

Muller has proposed to impose the sex strike until March 8, International Women’s Day. While some social media users oppose the idea, fail to see what it will accomplish, or are against women's power being whittled down to sexual favours, others believe it will have quite an impact if women band together in this manner.

Either way, the message is clear: women have had enough. 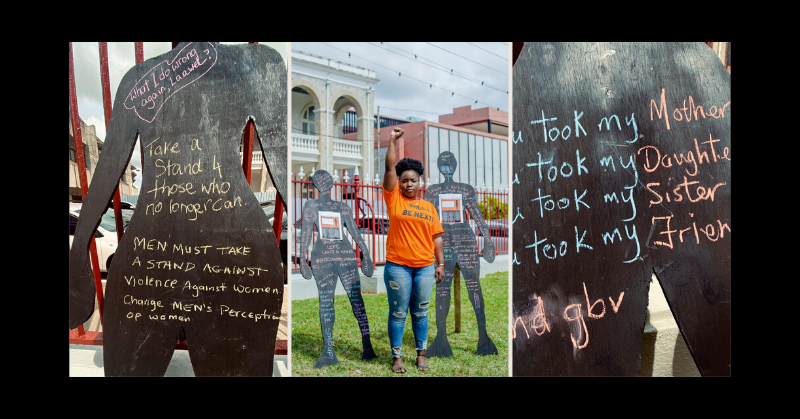 Montage of photos from ‘Orange Day’, which took place in Port of Spain, Trinidad, on January 25, 2020. Participants wrote messages on the “silent silhouettes”, which represented the victims of GBV. Photos by Womantra, used with permission.

In Trinidad and Tobago, if you or someone you know is a victim of GBV, you are encouraged to contact the police on 555, 999, or 800-TIPS, or to make a report at the nearest police station.

Editor's Note: Many thanks to Womantra Director Stephanie Leitch, who spoke with Global Voices on February 1, 2020 and clarified some key aspects of the ‘Orange Day’ event. Some of the language in this post, including the headline, has therefore been changed to better reflect that the event was not a protest, but rather a show of solidarity with and mourning for victims of GBV, and a constructive avenue through which the state and civil society organisations can work together to combat violence against women and girls.