Russians born when Putin first rose to power have come of age. And they're curious about change. 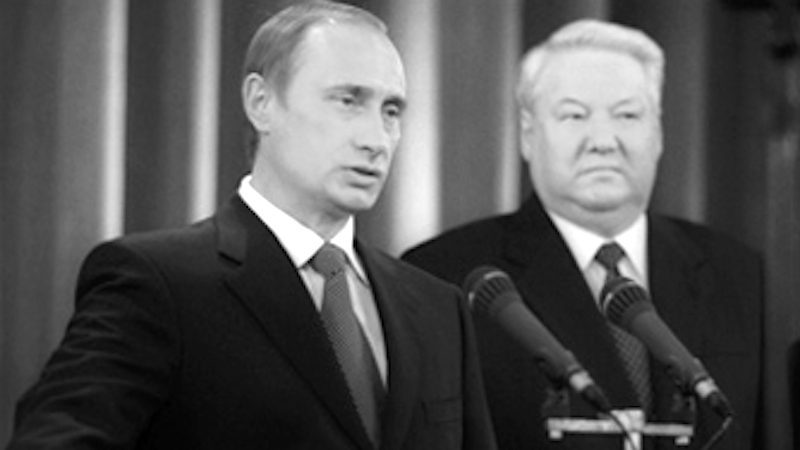 Vladimir Putin takes the oath during his inauguration as President of Russia, May 2000. Outgoing president Boris Yeltsin stands to his right. Photo CC-BY-4.0: Wikimedia Commons.

On New Year's Eve, activists from the Vesna Movement, a Russian pro-democracy youth movement, held solitary pickets in the Siberian city of Omsk. These young protesters were marking the twentieth anniversary of Vladimir Putin’s rise to power and they had just one question for the Russian President: “Volodya [diminutive form of Vladimir – ed.], aren’t you tired?”

Hoping against hope, the activists put their photos on Facebook, along with a post wondering whether Putin would follow in the footsteps of Russia's first president, Boris Yeltsin, by announcing his resignation on New Year's Eve:

So maybe today a New Year’s miracle with happen and [Putin] will repeat Yeltsin’s words and give the inhabitants of the country a gift? Alas, Putin is not Father Frost and is hardly capable of casting good spells, but he’s doing a great job with the role of the Grinch.

Instead, Putin’s annual New Year's speech emphasised that 2020 marked the 75th anniversary of “Victory in the Great Patriotic War.” The Russian president made no mention of his own “anniversary.” He did, however, call for Russia’s many generations to come together, which implies that he is aware of the country’s generational divide.

Overall, the twenty-year anniversary of Putin’s reign came and went with little fanfare from the Kremlin. But in light of the major political shakeup that the president announced in mid-January – constitutional changes which appear to set the stage for him to remain in power past his final presidential term in 2024 – conversations about the length of his rule have continued long past the “anniversary.”

In a Facebook post, St Petersburg based journalist Alexandra Garmazhapova wrote that she was just ten years old when Putin became president, prompting responses from other users about where they were in their lives at that time:

Now just imagine, when Vladimir Putin came to power, you were young. I, for example, was ten – I was eating porridge and listening to [my] mum.

I was 16, I didn’t listen to [my] mom, but to the Red Hot Chilli Peppers. Yes, Putin's been in power for 20 years, but the system itself has not changed [for] even longer. Even at that moment it was clear that nothing would change for a long time.

Twitter user Denis Orlov pointed out that Putin has now surpassed Leonid Brezhnev as one of Moscow’s longest-serving leaders (he now second only to Joseph Stalin):

[I] only now understood that over his 20 years Putin has ruled more than Brezhnev, who ruled [for] 18 years, and this isn’t the end yet. During [my] childhood it seemed to me from stories that Brezhnev’s rule [was] something long. Then I grew up and realized that I myself have already been living for so many years under one person.

While Russia’s older generations were born and raised in the Soviet Union, Putin is likely the only leader that Russian millennials have ever really known, at least in their living memory. Children born at the start of the millennium have lived their entire lives under Putin. As he switched from the presidency to the prime minister's office between 2008 and 2012, they were growing up and going to school.

Throughout this period, Putin has projected the image of a stabilising force; as the leader who resolved the chaos of the 1990s and brought Russia back from the chaos following the collapse of the Soviet Union. Now, however, practically two generations have come of age under Putin and have no real memory of the turbulent past he allegedly helped Russia overcome. So while pundits and politicians are preparing to face some big changes in the Russian political system, the so-called “Putin generation” (поколение Путина) is developing a reputation for being disinterested in politics – or being less susceptible to the line that anything is better than the “wild 1990s.”

According to a recent sociological survey of schoolchildren from across the country, 67% of respondents (children aged between 10 and 18) had no interest in domestic politics. Furthermore, nearly 75% of the respondents couldn’t name a single politician that they sympathise with or respect. Only 15% of those surveyed named Vladimir Putin and just 1.9% named prominent opposition politician Alexei Navalny – making him even less popular than the recently ousted prime minister Dmitry Medvedev (who was named by 2.8% of respondents).

It’s probably safe to assume that the bar for political engagement is generally low among children worldwide. For those who are old enough to vote, however, things appear to be more complex.

Discussions about the political leanings of Russia’s young adults really kicked off in 2017-2018, when children born in the year 2000 began to come of age in Russia and became eligible to vote. This coincided with a wave of anti-corruption protests spearheaded by Alexei Navalny, which drew tens of thousands of people to the streets of Moscow and other Russian cities. The visible presence of young people at the rallies added fuel to the discussion about the growth of a politically engaged younger generation.

“Russian youth, in contrast with the older generations, consume information differently, they’re gradually formulating their own social and political influences,” wrote sociologist Denis Volkov in a 2018 op-ed for the Russian business daily Vedomosti. “Recently, the political attitudes of young Russians have also begun to diverge from the ‘general line’ and the perceptions of [their] parents’ generation,” noted Volkov.

“Russia without Putin” and “Putin is a thief” were popular slogans during the protests. Furthermore, surveys from the Levada Center, an independent polling agency, from around that time showed that 42% of respondents believed Putin was to a large extent responsible for high-level corruption in the Russian government. That  said, there was also anecdotal evidence that many younger Russian remained pretty apathetic when it came to the question of Putin remaining president.

In 2019, Navalny’s then 17-year-old daughter, Dasha Navalnaya, released a series of politically-oriented video interviews with people her age on her YouTube channel, under the hashtag #ГолосМоегоПоколения (#VoiceOfMyGeneration). The videos accumulated hundreds of thousands of views. Her interviewees – who are presented in terms of their political leanings, ranging from a Navalny supporter to a “USSR fan” and a “supporter of Putin” – had clearly been carefully selected to provide a wide range of answers. Nevertheless, their surprising responses spoke to the diversity of opinion among the Putin generation.

While 19-year-old Yuliya (an “apolitical girl”) tells Navalnaya “I don’t think about Putin,” she also concedes that “he’s probably a good president” since he’s been in power for so long. On the other hand, alleged Putin supporter, 18-year-old Kirill, shocks his interviewer when he tells Navalnaya he joined United Russia’s youth group out of pragmatism, simply to advance his future career.

Just months after Navalnaya released her videos, young people took centre stage in protests yet again. In the summer of 2019, Russia experienced a wave of demonstrations in the run up to local elections, in which independent opposition candidates were barred from running. Hundreds of young people were arrested – and it was all over the web. Photographs of 18-year-old Olga Misik reading the constitution in front of a barricade of riot police went viral. A rousing courtroom speech from 21-year-old Egor Zhukov was even featured in the New Yorker. And so Russia’s anti-Putin youth appeared to be gearing up to struggle once again.

Sociologist Olga Zeveleva has her own theory about what brought Russian millennials to the streets in recent years. “First, more and more voters and protesters have grown up knowing only Vladimir Putin as Russia's political leader, and the Kremlin’s old narratives about the dangers of the pre-Putin era are losing their potency,” Zeveleva wrote in an op-ed for independent news website Meduza. “Second, new student solidarity campaigns are making millennials more visible.”

In other words, younger Russians who do oppose the system are disillusioned with Kremlin rhetoric and they know how to organise. But now the question is, will they remain in Russia?

In the aftermath of last year's protests, another Levada Centre survey showed that a shocking 53% of respondents age 18 to 24 would like to move abroad.

Given the constitutional changes that Putin is currently pushing through, some young Russians are fearing even more obstacles to their future political participation.

Kirill Shamiev, a PhD student and analyst who is studying outside of Russia, was quick to point out that under the proposed changes, people like him could be barred from running for president in the future:

[The new amendments state that a candidate for president must have] 25 years of permanent residence on Russia’s territory, a lifetime lack of foreign citizenship or residency permit in another state. I wonder if this will apply to people with temporary residence permits (study permits). If so, then at 24-25 years old I become a second-class citizen.

The Kremlin’s ongoing attempts at online censorship are a good example of an issue which could provoke a political backlash from Russia's youth. As political analyst Tatiana Stanovaya recently told the Financial Times: “The younger generation in Russia are largely disinterested in politics and bored by the system and what it represents… But they are also sensitive to any moves the state makes towards their personal space. If you try to, say, censor their social media experience, then they will get upset and engage.”

In the meantime, the youth activists from the Vesna Movement have latched on to Putin’s 20 year rule as the inspiration for new slogans in their protest campaigns.

On January 26, 2020, activists of the Vesna Movement staged another series of single person pickets in the Altai Republic, a region in western Siberia, to protest the proposed amendments to the constitution. This time, one of their slogans read: