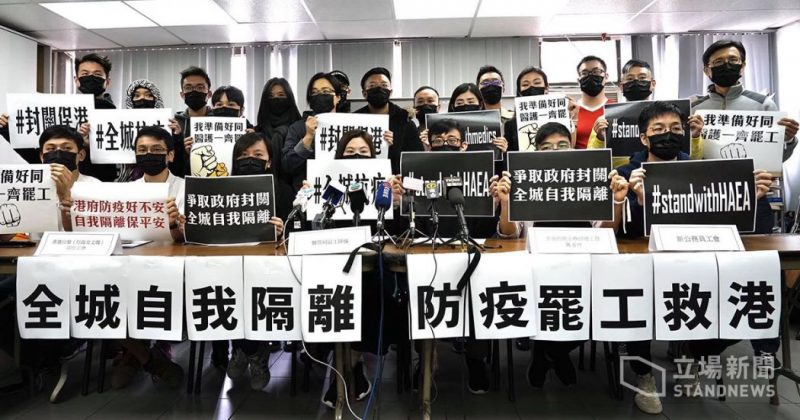 Since January 23, medical professionals in Hong Kong have been urging the government to close Hong Kong-China border checkpoints in order to limit the spread of the Wuhan coronavirus into Hong Kong. The government, however, has only agreed to tighten border controls and cut the number of mainland travelers by half.

As of January 30, there are 7,830 confirmed and 12,167 suspected coronavirus infections in China. This figure has surpassed the 5,327 confirmed cases recording during the Severe Acute Respiratory Syndrome (SARS) epidemic in 2003. In Hong Kong, the 10 confirmed coronavirus cases are either visitors from Wuhan or Hongkongers who had recently visited the city.

Though Beijing has imposed a lockdown on Wuhan, the capital of Hubei province and the center of the outbreak on 23 of January, according to senior officials from Hubei, about 5 million Wuhan residents (more than 40 percent of the city’s population) had left the city during the lunar new year seasonal travel rush. This suggests that several thousand coronavirus carriers may be moving around the country.

Thus far, Beijing and Shanghai have reported more than 100 confirmed cases and Guangdong, a province adjacent to Hong Kong, already has 354 confirmed cases. The medical sector is worried that if Hong Kong does not close its borders to mainland travelers, the coronavirus could spread to the city, where the population density makes it especially vulnerable to epidemics.

Painful lessons from the SARS epidemic

The medical sector's concern is not groundless. Hong Kong was the region hardest hit by the SARS epidemic 17 years ago. Between March and June 2003, the epidemic claimed 286 lives in Hong Kong, nine of whom were medical workers. The outbreak was traced back to one super-spreader from Guangzhou, who accounted for 80 percent of Hong Kong’s cases, including 30 nurses and doctors in the hospital where he was treated.

As a result, the city went on high alert when the news about Wuhan coronavirus broke. Between January 5 and 15, when China declared that there was zero increase in infection, Hong Kong identified 76 suspected cases. On January 21, when China denied the possibility of human-to-human transmission, Yuen Kwok Yung, a top Hong Kong infectious diseases expert, proclaimed that the virus has entered transmission stage. Before Beijing quarantined Wuhan on January 23, many mainland Chinese netizens accused Hong Kong of spreading social panic.

While Hong Kong’s medical sector has learned from the painful lesson of the SARS outbreak and solicited the help of the city’s residents in fighting the epidemic, the government has been a few steps behind.

In response to requests that all China and Hong Kong border checkpoints be closed, the authorities have only agreed to suspend direct transportation between Wuhan and Hong Kong. The Hospital Authority Employee Alliance, recently formed medical workers union with 15,000 members, threatened industrial action if the government refused to seal off the borders, explaining that:

The goal of such a measure is to prevent any non-Hong Kong resident from entering Hong Kong via China without a crucial purpose, and if such entry to Hong Kong is deemed unavoidable, each case should be reviewed independently on whether his [or] her entry should be granted. As for Hong Kong citizens returning to the city from China, stringent health monitoring measures should be implemented.

Macau，a former Portugal colony returned to China in 1999 under the One Country Two System rule, has banned residents from Wuhan and Hubei province from entering the city starting January 26, and Hong Kong followed suit on January 27. Hong Kong Chief Executive Carrie Lam also announced the suspension of high-speed rail service between Hong Kong and mainland China on January 30 with approval from Beijing, and that China will suspend the issuing of permits for individual visitors to Hong Kong in 49 Chinese cities. The policy would cut the total number of mainland Chinese visitors to Hong Kong by half, to about 15,000 per day.

Meanwhile, Russia has announced the closure of its borders with border to prevent the spread of Wuhan coronavirus to the country. Vietnam has also announced the suspension of visas to all Chinese citizens, including those from Hong Kong and Macau.

As the lunar new year holiday comes to an end, the next two weeks would be crucial for the control of the epidemic. Meanwhile, however, Hong Kong is still awaiting Beijing's approval on border control.