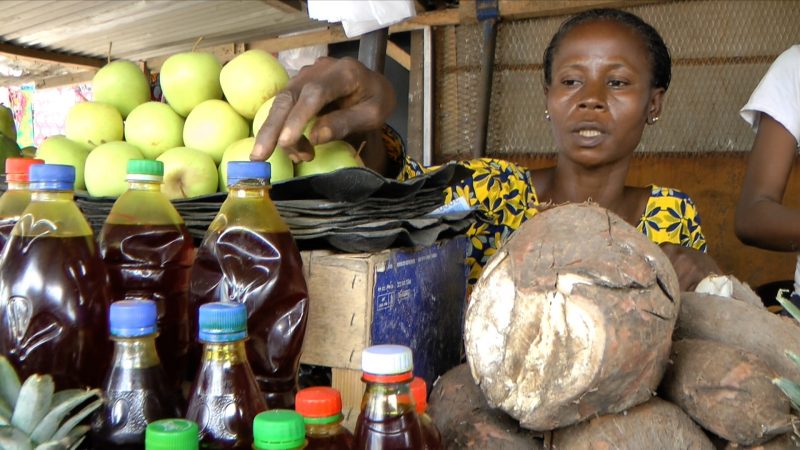 Ivorian vendor Koffe Pauline and her family sell red palm oil along with fresh fruits and vegetables like cassava root, pineapple and papaya at the Faya market in Abidjan, Côte d'Ivoire.

Côte d'Ivoire recently announced a plan to triple its palm oil production without endangering more indigenous forests, but the plan “may seem unrealistic” due to low yields and diminishing lands, according to a 2019 article from Radio France Internationale (RFI).

“The old model is no longer sustainable,” said Siaka Coulibaly, a representative of the Ivorian ministry of agriculture. “We can no longer produce extensively as before, we must ensure that existing plantations produce more with less area, even if it means reclaiming old wasteland,” Coulibaly told RFI. 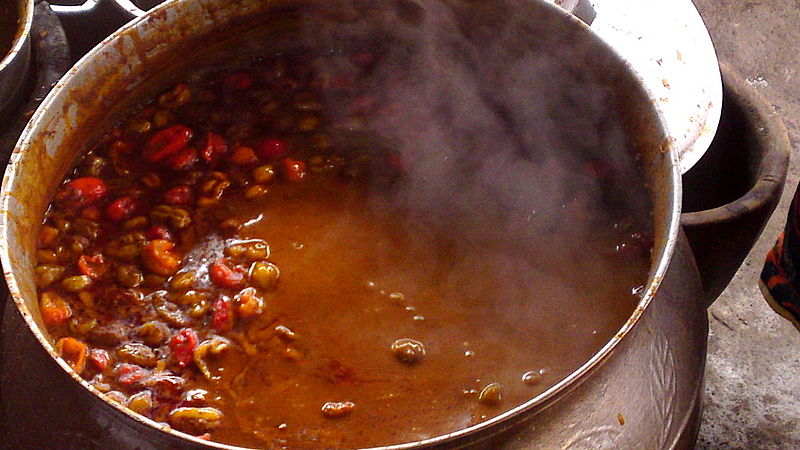 Sauce graine is one of the most popular sauces in Côte d'Ivoire, made from red palm oil, October 22, 2014, by
Aboukam via Wikimedia Commons, CC BY 2.0.

Despite the global trade in refined palm oil, the original red palm tree originated from forests in West Africa. In this region, including Côte d'Ivoire, many people still use the unrefined, more nutritious red palm oil in Ivorian cooking, just as their ancestors did.

Using manual presses or a simple mortar and pestle, Ivorian women pound up the oily scarlet fruit, then render off the bright red oil for cooking.

At home, women extract the juices and oil to make a rich, fruity sauce called sauce graine. The oily sauce keeps the nutritional juices, antioxidants and oils of the fruit intact for the meal.

Côte d'Ivoire ranks 11th in the world in producing refined palm oil, according to Indexmundi. It is the second-largest producer among African nations, behind Nigeria. About 75 percent of Côte d'Ivoire’s oil is consumed within the country — the rest is sold to neighboring nations, according to RFI. Between the localized demand for red palm fruit and the commercial industry, the palm oil industry employs almost 10 percent of the country's population.

Traveling to Côte d'Ivoire, Global Voices’ Jeslyn Lemke spoke with women who sell red palm oil in the markets and with people who use red palm oil to make soap, as seen in this short video:

In the busy, sprawling markets, red palm oil is often sold in open-air stands in recycled plastic bottles by women. Lemke talked with Ivorian vendor Koffe Pauline and her family, who sell red palm oil along with fresh fruits and vegetables like cassava root, pineapple and papaya at the Faya market in Abidjan.

Pauline, like other vendors in the market, sells hand-pounded oil for the equivalent of $1-2 United States dollars, depending on the quantity. Unlike the more refined golden palm oil, red palm oil has a robust tomato-like flavor and is rich in Vitamin B and Carotenoids, the same orange substance found in salmon and carrots.

Lemke also visited a long-standing soap-making facility located outside Divo, Côte d'Ivoire, that produces kaba-kuru — a soap made from red palm oil and sometimes cocoa butter. The bright yellow balls of hearty soap are specifically used by Ivorians for washing clothes and are sold to neighboring African countries of Burkina Faso and Nigeria as well. 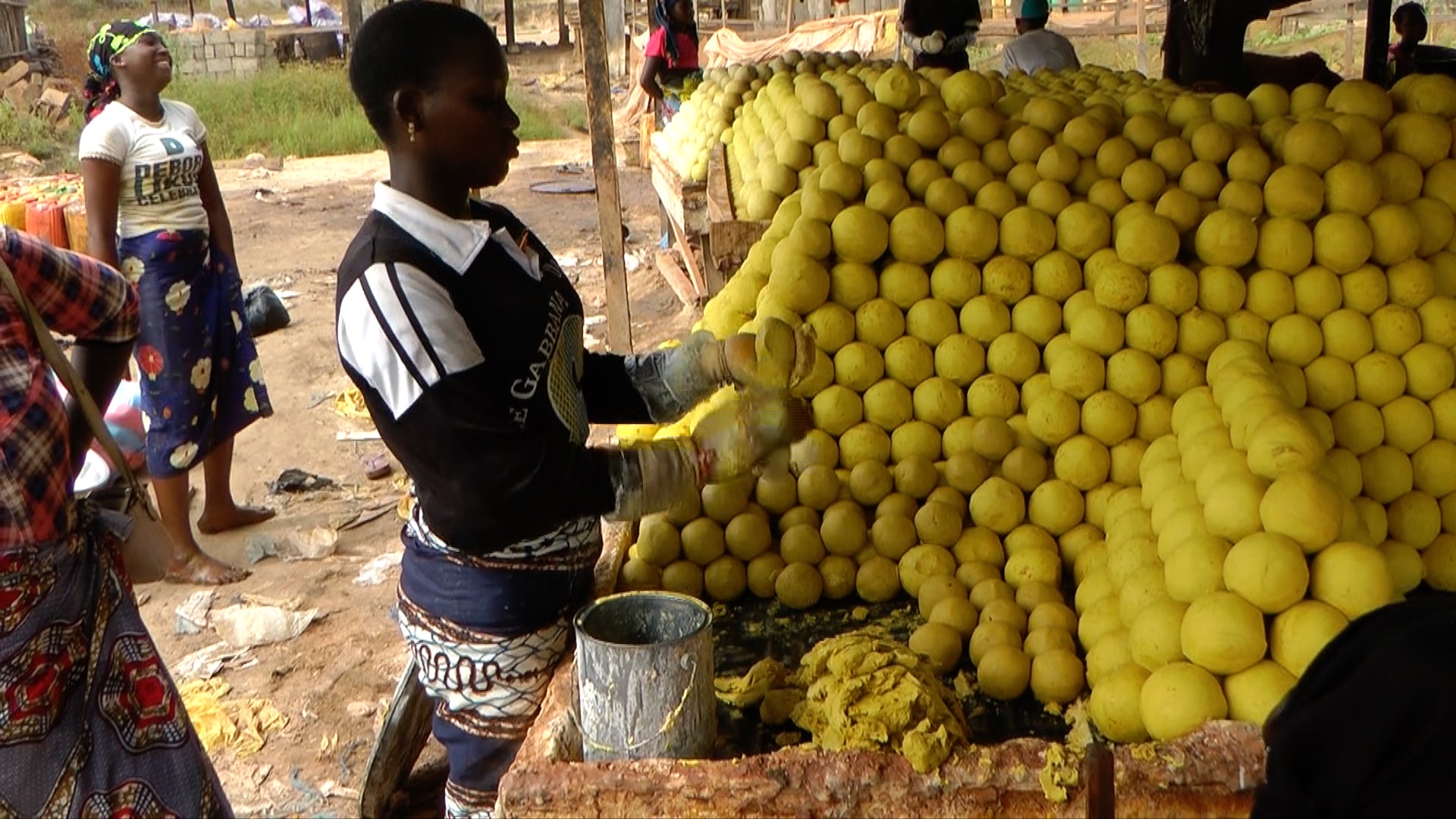 Here, women measure out quantities of liquid potassium hydroxide and red palm oil. Workers mix up the two liquids, which saponify into a thicker yellow paste. The paste is rolled into balls while still liquid and then stacked to dry with the other soap. The rough soap is strong enough for washing clothing — but too strong to be used on the skin.

Ironically, Côte d'Ivoire is experiencing a shortage of palm oil and imports much of its oil from Asian nations, which leads the world in palm oil production.

GroIntelligence, an agricultural platform, describes the global palm oil industry as a ” ‘tug-of-war’ of global proportions:”

On the one hand, the practical benefits offered by palm oil have become a ubiquitous part of the lives of consumers; and the industry has helped pull many out of poverty. On the other hand, palm oil producers, in many cases, are leaving environmental devastation in their wake.

Still, in Côte d'Ivoire, the use of unrefined red palm oil in Ivorian cooking and kaba-kuru soap production continues to flourish.