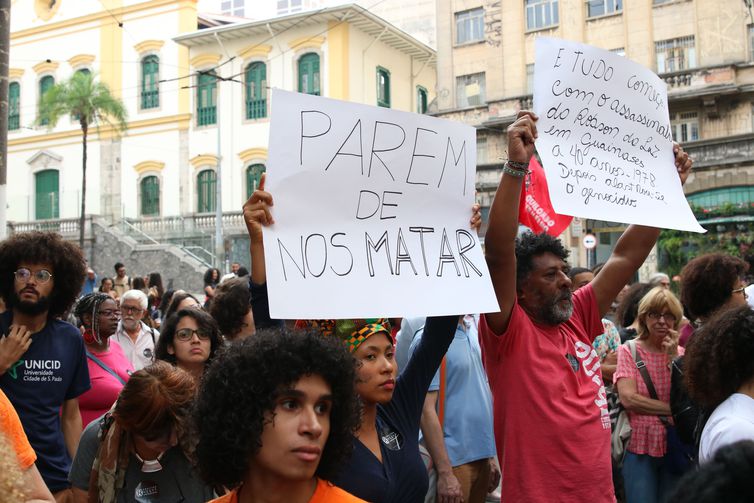 This post is an aggregation of several stories by Agência Mural. It is published here via a content-sharing partnership between Global Voices and Agência Mural.

On December 1, nine people aged between 14 and 23 died in Paraisópolis, a favela in São Paulo that is home to more than 100,000 people, during a police operation in a funk street party.

Since then, residents have been demonstrating, demanding answers and accountability for the police's actions at the popular “Baile da 17” which attracts thousands of partygoers every weekend.

Authorities claim that the police were chasing two men who were on a motorcycle. The men allegedly fled to the area where the dance was being held amid a gunfight with police officers, triggering a tumult. In the rush, people were trampled. It is estimated that 5,000 people were at the party when the commotion began.

But footage contradicting that version surfaced online on the night of the incident. The video below, published by public security reporter André Caramante, shows police officers cornering and beating people in an alleyway:

The specific circumstances of their deaths are still unclear. Thirty-one police officers are being investigated. Some residents speculate that the raid might have been retaliation for the murder of a police officer in the area in November 2019.

Hundreds of residents protested on December 2, carrying posters and crosses. Motorcyclists sounded their horns, and a minute's silence and a prayer were also held.

They also sang the “Rap of happiness”, a classic funk song whose lyrics say: “I just want to be happy and walk peacefully in the favela where I was born, and be able to be proud and know that poor people have their [own] place.”

In the following week, life in the neighbourhood was quieter than usual, according to residents; still afraid, most avoided giving interviews.

On the other hand, family members protested throughout the week. Chants such as “the hood wants peace”, “stop oppression”, and “justice” were heard at one of the events, which also criticised São Paulo state governor João Doria (from PSDB, a centre-right party).

The governor, who denied the liability of the police soon after the news of the deaths, changed his tone after videos showing a policeman laughing as he assaulted youths on the streets of the favela surfaced. He received family members of the victims and announced an external commission to investigate the facts:

When I learned of the new video that shows a policeman beating young people in a corner of Paraisópolis, I demanded exemplary punishment for the aggressor, already suspended of his duties. Practices like this do not conform to the procedures of the São Paulo Police and will be vehemently condemned.

A page dedicated to Paraisópolis on Facebook published a text in solidarity with family members. “We will not accept this silently, we demand justice and the punishment of the guilty. Paraisópolis and the communities need social action to face their difficulties, instead of just reacting we need to prevent [problems]. STOP the violence, we want peace”.

The group also published a series of nine demands, including a transparent investigation into the case, support for leisure activities in the neighbourhood, and working against the criminalization of funk music.

The incident in Paraisópolis raised discussions in Brazil about two points: the lack of leisure spaces for young people in impoverished areas of the city, and prejudice against funk music.

Several young people from this area, interviewed during the week by Agência Mural, spoke of the lack of leisure spaces, in addition to the expense needed to move around the city. There are also questions over whether incidents such as that of Paraisópolis would have occurred in wealthy areas of the city, where funk is also played.

The party where the police operation took place is one of the most famous in São Paulo. The nine victims were not from the Paraisópolis itself, but from other suburbs: Capão Redondo and Interlagos, in the south, Pirituba and Jaraguá, in the north, Vila Matilde, in the east, and the towns of Mogi das Cruzes and Carapicuíba.

A Facebook post from April by one of the murdered youths, Dennys Guilherme, went viral. The caption on one of his photos said: “I'm going to be one of the favela people who will conquer the world. I'm going to be the reason for so much of my mother’s pride”. At the protest, Fernanda, his sister, called for justice.

One of the contentious issues is the loud noise during the nights of these parties. Residents who do not attend the event usually complain about it, and claim it is excessive. On the other hand, the events also stimulate the local economy.

The Inter-American Commission for Human Rights (CIDH) condemned the actions of the police and demanded that São Paulo state reform its security policies. Although the number of homicides fell 11 per cent in 2018 in Brazil, the number of people killed by police increased, according to a recent survey by the Brazilian Forum of Public Security. In 2018 alone, 6,220 people were killed during military police actions.

In an editorial about the tragedy, we, Agência Mural, stated:

The death of these young people from Paraisópolis reveals what is between the lines: the outskirts have no rights or have fewer rights to be happy than other places in the city. It is not seen as part of the city, but as a zone of exclusion.