'I am terrified by the situation in Wuhan' 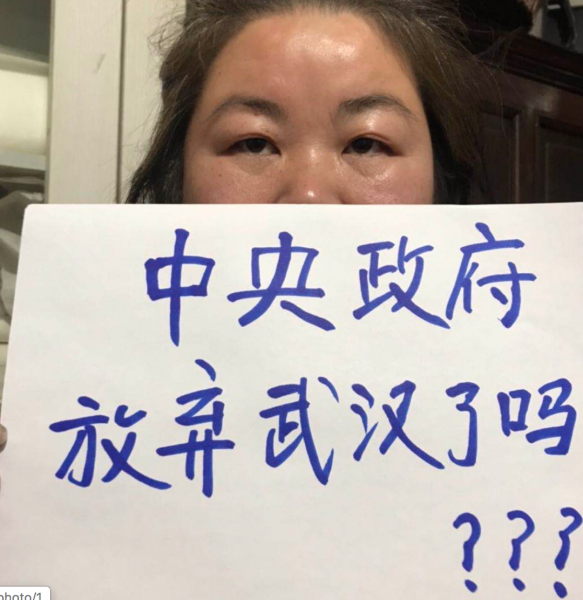 Photo from Twitter in which a woman holds a sign saying 中央政府放弃武汉了吗？meaning “Has the Chinese central government abandoned Wuhan?’ Photo used with permission from this tweet.

The city of Wuhan, located in central China, has been quarantined by the Chinese government on January 23, 2020 in an effort to stop the spread of the coronavirus (2019-nCoV). The new virus is believed to have originated in December 2019 in a Wuhan market. Now, over 11 million residents are in a state of shock and panic, given the lack of appropriate medical response and credible information.

According to the latest updates issued by Chinese authorities, there are now 2,034 confirmed cases of infection, and 56 deaths within mainland China, for the period of December 8, 2019, to January 26, 2020.

The majority of infected patients are either Wuhan residents or people who recently visited the city. However, the official figure may not reflect the entire reality as certain virus carriers do not display serious symptoms, and medical institutions do not have the capacity to treat infected or possibly infected patients.

There have been a number of estimations on the actual figure of infected people using an epidemic transmission model. An international medical team estimated that the number of infected residents of Wuhan could be more than 11,341 by January 21, while it could potentially reach 191,529 by February 4, 2020.

Currently, the deadly coronavirus has spread across China except for Tibet, as large numbers of migrant workers and students from Wuhan have traveled back to their home province since early January for the Lunar New Year family reunion on January 25.

In order to contain the spread of the epidemic, the central government decided to quarantine the city on January 23 — the airport, train stations and public transportation were all shut down. On the next day, 11 other cities in Hubei province were added to the quarantine zone.

Citizens in Wuhan are understandably in shock, as just a few days ago, the authorities had told them that the virus could be contained given that there was no indication of human-to-human transmission.

Wuhan based journalist Chu Chaoxin reconstructed the timeline since December 31, 2019, when the epidemic alert system was activated and found out that between January 5 and January 15, Wuhan health authorities had not announced any newly confirmed infection. The number of confirmed cases remained at 59. The period coincided with the annual government meeting known as Lianghui or Two Sessions of Wuhan city and Hubei province:

Even more concerning is the fact that officials did not call off year-end celebration activities. On January 18, a residential community in Wuhan organized a year-end buffet for 40,000 families (about 130,000 individuals). On January 21, the Hubei’s year-end cultural performance at Wuhan Hongshan Hall was also attended by top officials of the province.

By January 23, there were 886 confirmed cases and 26 deaths across China, as Beijing suddenly announced Wuhan's shutdown. City residents panicked as they ran for food, daily necessities, medicines and masks — and some attempted to escape from quarantine. Many have criticized the sudden decision, as this citizen who left Wuhan before the shutdown and wrote:

I don’t know if the government is just incapable of handling the situation or they have prepared to abandon the whole province. I hope for the former explanation. The government should be responsible for the shutdown and it should at least distribute free masks, ensure food supplies, sanitize the residential areas, transportation for the medical workers and channel for those who were sick to be hospitalized… they should have prepared for all these before the announcement. These are basic measures of an accountable government. However, there was nothing, just an official announcement.

As a result, all hospitals have been flooded with patients who have developed symptoms that could possibly indicate cases of coronavirus. The vast majority were asked to quarantine themselves at home, as there are not enough medical workers and supplies to accept more patients.

On social media, messages about people seeking help for hospital admission in Wuhan have continued to circulate. Yet many hospitals seem to lack enough protective gear to safeguard medical workers from the infection. Medical workers themselves are in despair: a video that shows a medical worker who had a nervous breakdown in a hospital in Wuhan has gone viral online in the past few days:

I share this video so that people can understand how the medical workers in Wuhan felt and would show more respect on their work. There are so many messages circulation on WeChat that I withhold myself from releasing. But I want to stress that if we ignored all the problems caused by an incapable government, one day we will all become victims.

A former reporter from Southern Weekend: even though I had reported on the SARS epidemic 17 years ago and tracked the spread of the Avian Flu from Sichuan to Guangxi to Hanoi in Vietnam 16 years ago, I am terrified by the situation in Wuhan. On January 24, many hospitals in Wuhan faced were facing a serious shortage of medical workers and suppliers. No one took care of the dead bodies. The scale of the epidemic, the shortage of medical supplies and the chaotic response — all these are things I could have never imagined.

One of the main reasons for panic is the fact that certain netizens, either paid by the government or speaking out of their own belief, are patrolling social media platforms, accusing netizens who ask for help or express their frustrations of spreading rumors that create trouble. Some netizens also started to worry that the authorities could cut the internet in Wuhan as part of the lockdown, as this netizen:

Seeking help! If Wuhan has its internet access shut down, how can we reach out to the rest of the world? Please give me some suggestions. Please, I beg you!

On January 25, the first day of the Lunar New Year, Chinese President Xi Jinping finally broke his silence concerning the spread of the new coronavirus by admitting that the new virus is accelerating and that the country is in a grave situation.

On the same day, Beijing deployed 450 military medical staff members to Wuhan to assist with medical relief work. Authorities have also banned all private cars from running in the city starting January 26 and began the construction of two new hospitals in Wuhan within 10 days to provide space for an additional 2,300 patients.

However, as the virus has spread across the country, less developed, second-tier cities, in particular those in Hubei province, may face similar outbreaks, as this netizens warns:

Please pay attention to the cities at the outskirts of Wuhan. The situation in other Hubei regions is not optimistic. Now the whole world is watching Wuhan, don’t forget are other cities, please save them…