Let's get beyond the overused trope of 'violence and poverty' 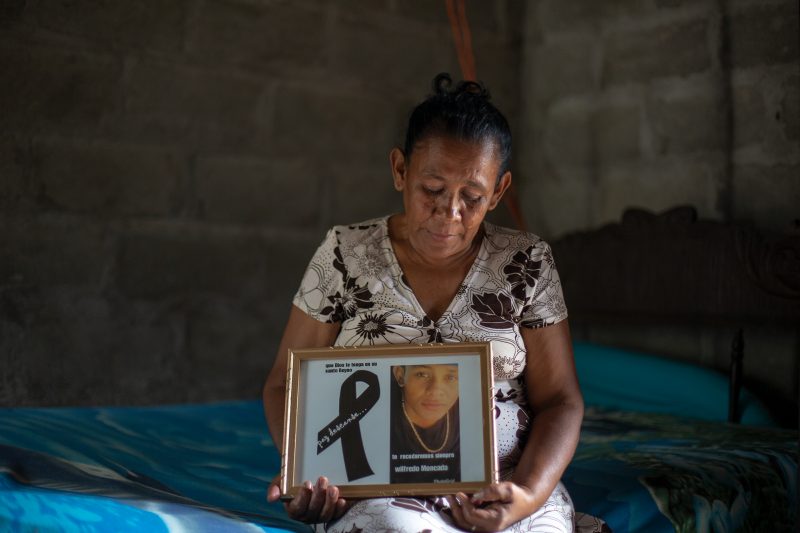 A mother named Doris holds a portrait of her son, Wilfredo Moncada, a former leader of anti-government protests in 2018. Choluteca, Honduras, May 29, 2019. Photo credit: Martín Cálix for Contraccoriente. Used with permission.

According to the government of Guatemala, between January 15 and 16, 2020, more than 3,500 people crossed the border into that country on foot, in the eventual hope of building a new life in the United States or Mexico. The majority of them were from Honduras. According to reporting by international media such as NPR, Wall Street Journal, and Reuters, the people migrating across Central American are fleeing “poverty and violence”—but these terms barely scratch the surface of why people choose to hitchhike for thousands of miles and face an uncertain future at the U.S.-Mexico border.

Hondurans have been fleeing their country for years, but the term “caravan” was popularized worldwide in 2018, when more than 10,000 Central Americans traveled together to mutually support and protect each other on the road through Guatemala and Mexico.

More than living in “poverty and violence,” Hondurans are in fact engulfed in a narco-state whose leadership is supported by the United States. They suffer from widespread corruption, gender violence, gang control, land-grabs, and drought driven by climate change.

In 2020, even if the road ahead for migrants is more difficult than before for reasons outside the scope of this story, thousands have decided that their fate is likely to better outside of Honduras than inside. 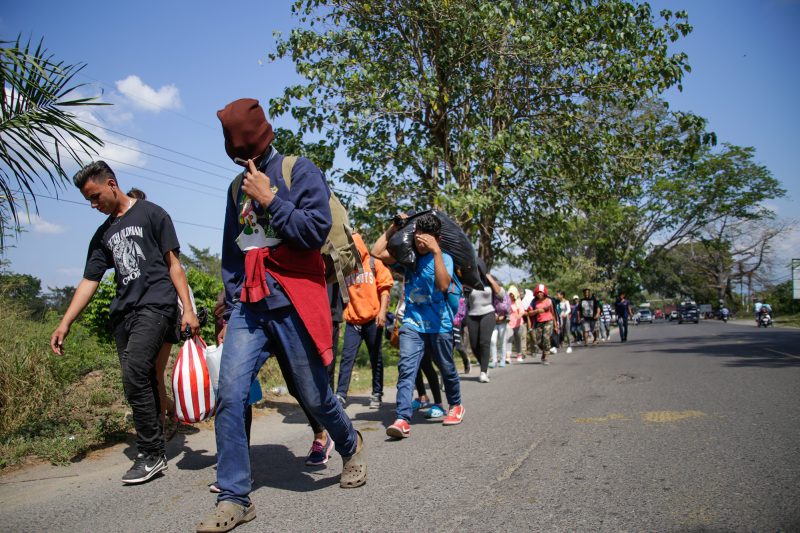 What is Happening in Honduras

We know that corruption and drug-money are, well, bad.

Yet, when we think about what bad politicians do, we seldom imagine them to have been found guilty of funneling tons of cocaine to the United States. This is the charge on which Tony Hernández, former politician and brother of incumbent President Juan Orlando Hernández, was convicted last October.

Now President Hernández, who has been lauded by the U.S. Drugs and Enforcement Agency for his fight against drug-trafficking, is himself under scrutiny for his alleged role in the cocaine business.

During Tony Hernández's trial, witnesses asserted that the president tried to protect his brother from extradition and received millions of dollars worth of bribes to fund his party's political campaigns, according to reports from The New York Times and Reuters. President Hernández denies the allegations.

One might say that Hondurans freely elected such politicians and have therefore put their trust in the governance of Hernández, but this reasoning does not take into account that Hondurans did not want this government in the first place. Hondurans have protested—and have been killed by state forces during demonstrations—to demand a new vote after apparent fraudulent elections in December 2017, which put Hernández in power. At that time, the U.S. decided to support Hernández's election anyway.

In 2019, amidst heavy suspicions about their president's involvement in drug money, Hondurans asked their president to leave, again. Police released tear gas in response. 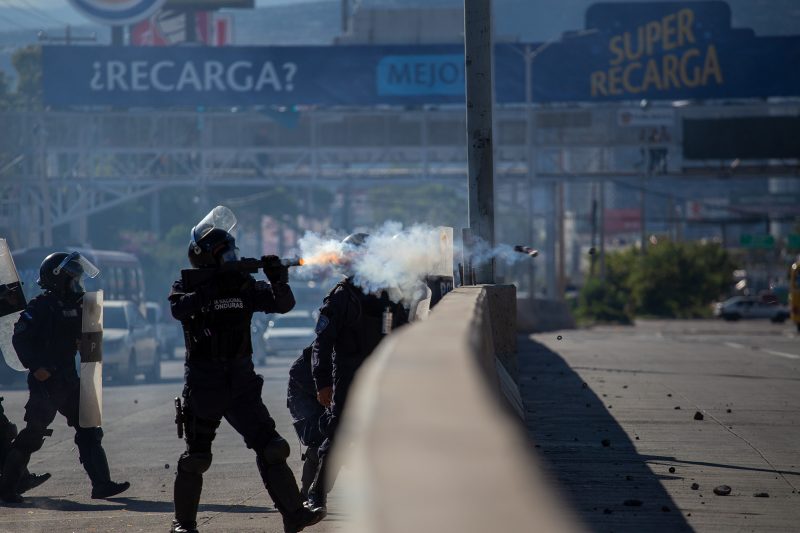 The next option for Honduras would then have been to count on anti-corruption systems to prosecute high-level criminals, right? Well, on the same days in January 2020 that thousands of Hondurans trekked north, President Hernández and lawmakers scrapped that thread of hope.

The Honduran authorities decided to end the mandate of its internationally-backed anti-corruption body, the Mission to Support the Fight against Corruption and Impunity in Honduras (MACCIH). According to Insight Crime, MACCIH had spearheaded high profile corruption cases, and “MACCIH’s dissolution does not bode well for the fight against corruption in a region beset by graft.”

Widespread corruption, on top of being illegal and immoral, undermines society.

For example, when “the corrupt steal 49 lempiras [US$1.99 approx.] out of every 100 lempiras [US$4.06 approx.] from the Ministry of Health,” as the National Anticorruption Council has reported, it leads the Honduran healthcare system to near collapse.

Last year, Honduras experienced its worst dengue epidemic in 50 years. More than 400 people died, according to The New York Times, which also reported that the health crisis is compounded by the effects of climate change and government dysfunction. 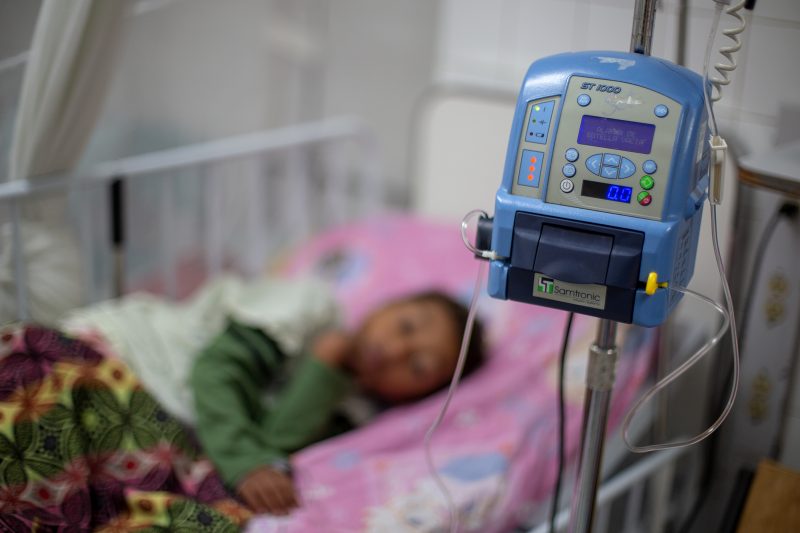 A child with dengue fever at the University School Hospital of Tegucigalpa. At the time the photo was taken, the room was overwhelmed with patients. Tegucigalpa, Honduras, July 24, 2019. Photo credit: Martín Cálix for Contraccoriente. Used with permission.

The future of the country is also at risk, as the education system is ineffective. The day the migrant caravan left San Pedro Sula, Honduran media published another symbolic statistic about the country's condition—one million Honduran children are out of school. They are either too poor or believe school is unnecessary because they would not find a job by the end of it, anyway.

Last year, the Honduran National Congress passed reforms to healthcare and education, a move Hondurans saw as opening the door to more corruption and to privatization of these sectors. Hondurans took their grievances to the streets in May and June 2019, where they were met once again by tear gas and bullets. Lawmakers suspended the reforms. 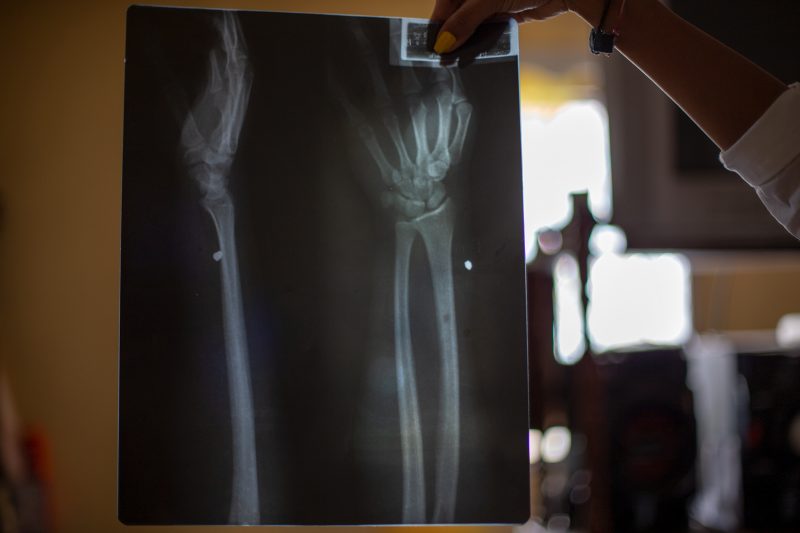 X-ray of a university student's arm with a bullet splinter after the crackdown on June 24, 2019 in which the army and military police entered a university and shot students with tear gas and live ammunition. Tegucigalpa, Honduras, June 27, 2019. Photo credit: Martín Cálix for Contraccoriente. Used with permission.

On top of being oppressed by the forces of their own state, Hondurans must navigate the rules set by gangs. In many neighborhoods, gangs, often comprising impoverished youth who fall into criminality, are the de facto controllers, extorting and threatening locals. Death is a daily occurrence in a country where there were more than 42 homicides per 100,000 people in 2019. The way the Honduran government responds to gangs is, well, with more soldiers.

While gang violence is a real threat, gender violence permeates society as well. Honduras has the second-highest rate of femicides on the American continent, according to the United Nations Economic Commission for Latin America and the Caribbean (ECLAC). Fifteen women were killed during the first two weeks of January alone. 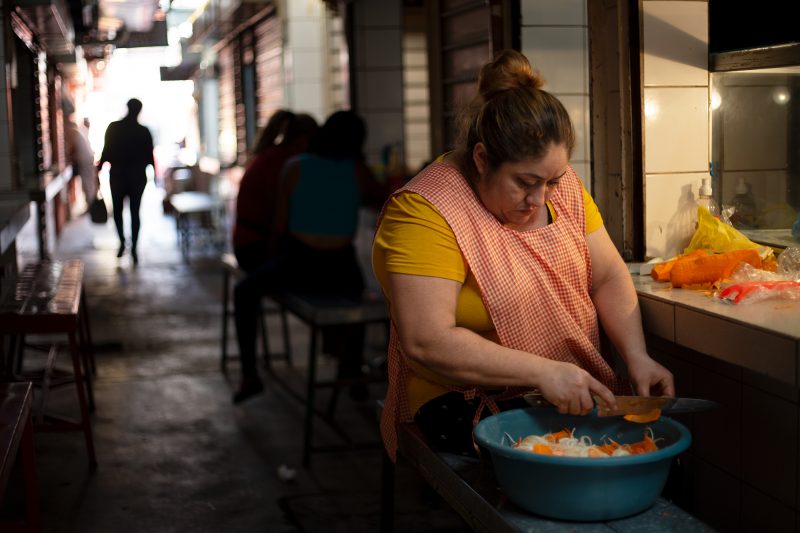 In rural areas, indigenous peoples and peasants put their lives on the line defending their homes against land grabs. The murder of the renowned indigenous leader and environmental activist, Berta Cáceres, who was killed by gunmen in her home in 2016, is well-known and has found partial justice.

The case of Cáceres was widely reported by the media—however, many other murders of environmental activists remain in the shadows.

In 2017 Global Witness called Honduras “the deadliest country in the world for environmental activism.” At the beginning of January 2020 indigenous leader Vicente Saavedra was found dead. Garifuna people, who also live under threat of expulsion from their ancestral lands by tourism or international business projects, defend their territories and face violence too.

These business-related threats do not take into account the growing effects of climate change, which force farmers to abandon their drying, dying, corn and bean crops.

And there's more—this story only scratches the surface of why Hondurans of all ages, genders, sexual orientations, and ethnicities find the dangerous migrant route more hopeful than staying in Honduras.

Hondurans flee more than “violence and poverty.” They flee a murderous, exploitative, racist, misogynist, and drug money-fueled system that does not change despite their efforts.