Is guns in the hands of civilians the solution? 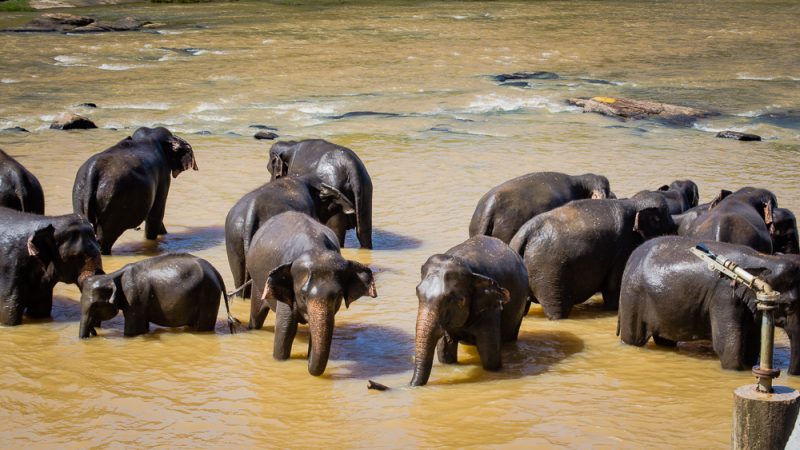 Elephants bathing at Pinnawala Elephant Orphanage. 2017. Image by the author.

Activists in Sri Lanka are concerned after the government announced plans to issue firearms to a newly formed civil defence force tasked with protecting farmers from elephants.

There are an estimated 7,500 wild elephants in Sri Lanka and human-elephant conflict is a burning issue for local farmers. Elephant habitats are shrinking as humans are slowly encroaching on their roaming spaces. Having no place to go, these animals end up destroying crops in farmlands in their search for food. Some rural communities see them as dangerous pests and people have lost their lives in encounters with elephants. Around 100 people were killed by the elephants in 2019 alone.

During 2019, a record number of 361 elephants died in Sri Lanka and 85% were killed by people as revenge for ‘crop-raiding’. Each year, elephants kill dozens of people and damage agricultural crops and livelihoods and people kill them with electric fences, poison, and explosives concealed in food.

Sri Lanka reaches record number of elephant deaths in 2019, 85% at the hands of Man. Electric fences, poison and explosives believed the cause for roaming elephants’ deaths. We trust the Sri Lankan Government acts immediately. #elephants #srilankahttps://t.co/Q28rnTcONw

Killing wild elephants in Sri Lanka is a criminal offence that, in its most severe form, can carry a death sentence. But this does not deter the killing of elephants as people often cite self-defence.

Guns as a solution

Over the years, the Sri Lankan government has taken a number of measures to minimize human-elephant conflicts, including relocating farmers living on the edges of forests and providing electric fencing.

On 13 January 2020, Sri Lanka's Ministry of Wildlife Conservation announced that the government is recruiting a 2500 strong civil defence force which will be made up of local volunteers in areas most affected by the human-elephant conflict. The first phase of the program has already been launched. Every eight officers from the civil defence force will be given five firearms each to scare away elephants. Building strong elephant fences with aid from the Chinese government has also been proposed.

People are raising their voices against the decision to arm local volunteers. Although the reported purpose of handing guns is to scare elephants, elephants can also be killed with the guns as people use various methods such as poisons and explosives to kill elephants each year. Legal practitioner Uween Jayasinha says the government is licensing its citizens to kill.

“This decision by a Government [to issue 2000 shotguns to farmers] is astounding for many reasons, but mostly for the extreme short-sightedness of licensing its citizens to kill or maim elephants”..#SriLanka #lka #HumanElephantConflict https://t.co/vfEQCkjDR4

Killing elephants with shotguns is very inefficient. The clusters of tiny, iron pellets rarely kill such large animals instantly. Instead, pellets lodge in tissue and cartilage, causing wounds that ooze and fester for months before infection, then limited mobility and eventual starvation kills the great aristocrats of Sri Lanka’s jungles. This long and painful penalty plays out, with the fallen elephant calling a final, heart-wrenching, childlike gulping, a cry of distress.

Jayawardane highlights a report on YouTube by a Sri Lankan magazine Pulse.lk which says that 2000 guns are being handed to farmers and villagers to protect themselves from elephants and more will be issued.

In the report, Sumith Pilapitiya, former Director-General of Wildlife Conservation reminds that by law elephants cannot be harmed. However, the government is issuing guns to civilians in the name of protection.

Nishan Wijetunge, committee member of Sri Lanka Association of Inbound Tour Operators warns that giving guns to civilians means that there will be increased poaching on other species too and the illegal game-meat industry may grow.

Elephant stuns staff and guests when he wanders into reception at luxury hotel in Sri Lanka https://t.co/YxsMxOPS6o

Sri Lanka was recently recognised as Asia's best nation for wildlife tourism. Each year, hundreds of elephants assemble on the shores of an ancient reservoir in Sri Lanka's north-central Minneriya National Park — which is known to the world as ‘The Gathering’. Jayawardane asks:

I wonder, will the wildlife enthusiasts of the world want to visit a Nation that is systematically killing her elephants? Will Sri Lanka, where magnificent elephants have now been demoted from National Treasure to vermin, be the paradise isle that modern tourists dream of?