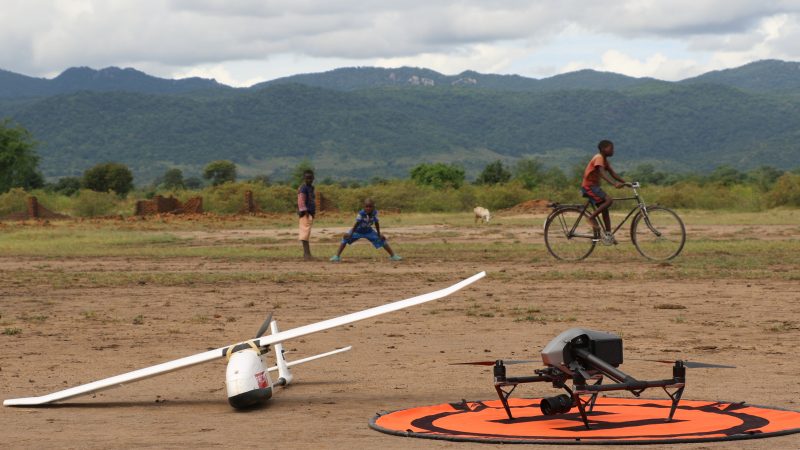 In Malawi, 14 million people rely mainly on agriculture as a means of subsistence. In 2017, drought in the country affected more than half the population. This EU-funded project uses drones to create maps that help to locate resources such as hospitals, schools, and roads which are all vital in providing safe shelter for the population in case of a disaster. Photo by the European Union/Anouk Delafortrie, April 13, 2018, via Flickr CC BY 2.0.

Since 2016, Malawi has stood at the forefront of utilizing unmanned aircraft systems — also known as drones — in Africa. This year, the country took a step further by opening the African Drone and Data Academy (ADDA) — the first of its kind in Africa.

“In Malawi, we strongly believe that adopting modern technologies such as drones and advanced data analysis and management techniques will help us to serve our children better,” said James Chakwera, director of Malawi’s Department of Civil Aviation.

Open to Malawians and citizens of neighboring countries, the academy will equip individuals with drone technology skills necessary for jobs using drones, particularly in humanitarian aid and disaster preparedness.

The academy plans to educate 150 students by 2020 through a 10-week course. The first cohort has already begun training and will graduate on March 18, 2020. The cohort is comprised of 26 students, with 16 from Malawi, 10 from across Africa, and women making up over half of the class.

My sincere gratitude to be part of the first cohort of African Drone and Data Academy (ADDA) in Malawi. Getting to interact with International people and learn new skills in Drone Technology is really exciting. @MeloGasai @Sdhikrullahi @banza024 #Malawi#Drones https://t.co/LLpcBWjQu0

Shittu, a biomedical researcher and also a member of the first ADDA cohort, shared his reasons why he's excited by ADDA's mission and work:

Ever wonder if we can predict disaster before it happens, map out breeding habitats of the world most deadliest insects (mosquitoes), monitor outbreaks and transferring medical supplies to remote areas….

All these are questions I seek to explore with drone…

Applications for the second cohort are already open.

The academy plans to partner with Malawi University of Science and Technology for a free, 2-year master's degree in drone and data innovation by 2022 — another first in Africa.

Drones for good in Malawi

Drones have long been recognized as an essential tool for conducting humanitarian operations in Malawi, where floods account for 48 percent of major disasters. Since 1946, the severity of flood disasters has increased, with more than 80,000 displaced in March 2019 flash floods in Malawi.

In June 2017, the Malawi government partnered with UNICEF to launch a drone testing corridor in Malawi, also the first of its kind in Africa. They set it up to research how drones can impact humanitarian work. UNICEF chose to establish the testing drone in Malawi because unreliable infrastructure has often hindered the distribution of critical medicine to clinics in remote, rural areas.

In November 2017, a drone called Eco Malawi delivered drugs within a 19-kilometer radius. Eco Malawi is one of five drones designed and built by 13 Malawian students at Virginia Tech University’s unmanned systems lab in the USA.  Before this achievement, the 13 students had limited or no experience with drone construction.

UNICEF has been using drones in Malawi to provide vaccines, blood transfusion kits, antibiotics and malaria drugs. In drone trials by UNICEF in 2016, drones were used to carry blood samples from babies in villages to clinics for HIV testing. These efforts have improved access to antiretroviral drugs to HIV+ mothers and children in remote regions.

The European Union has also supported a range of humanitarian initiatives in Malawi that feature drones as a tool for mapping, research and evacuation training related to disaster preparedness.

Uganda has its own drone hub known as Uganda Flying Lab to provide solutions to its development and humanitarian challenges. The lab is a mapping and data analytics hub that also trains students to collect and analyze data.

Karen Asaba, an ADDA student, first developed an interest in drones while studying at the Uganda Flying Labs.

Flying Labs operates in 14 countries in Africa including Kenya. However, Samuel Wanjohi, a film director, was quick to point out on Twitter that Kenya had banned the use of drones with a steep fine attached to it.

Meanwhile in Kenya:
The Kenya Civil Aviation Authority (KCAA) has prohibited the use of drones, warning that those violating the ban risk a fine of Sh100,000 or a year in prison.

In Rwanda, Zipline, a drone medical delivery company, has operated since 2016. As of 2018, Zipline has supplied 35 percent of blood from national blood transfusion banks to remote clinics.

Drones are considered as a type of “fourth industrial technology” with the potential to transform business models, curb climate change, increase agricultural production, and create jobs.

The fourth industrial revolution, known also as “industry 4.0,” is the current era of human development where disruptive technologies are fusing with the physical and biological worlds.

Netizen Cristina Karrer celebrated ADDA's launch with hope for what this means for Malawi's future, particularly women in tech:

The first #drone #academy in Africa has opened in #Malawi . 26 #dronepilots, more than half of them #womenwhofly will get a topnoch education. #srf #UNICEF #powertowomen #frogleaping pic.twitter.com/YA11k75MYu

With the right policies and platforms, drone technology can help solve critical problems. For now, flying a drone in Malawi is legal, but citizens must obtain permission from the Department of Civil Aviation before each flight. For commercial, corporate or nonprofit drone use, licensing and registration are required.