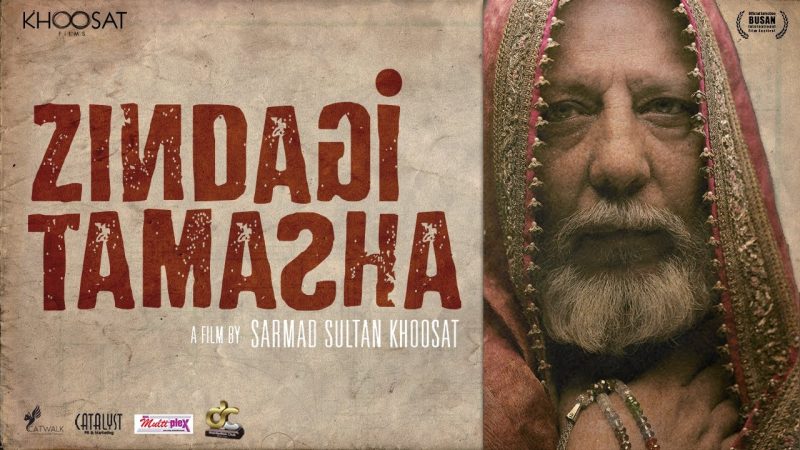 Screenshot from the official trailer of Zindagi Tamasha (Circus of Life)

Renowned Pakistani filmmaker and actor Sarmad Khoosat is facing constant threats to stop the release of his film Zindagi Tamasha (Circus of Life) in Pakistan. Even after announcing that he is no longer releasing the film and cancelling the premier in Pakistan, personal threats against him continue unabated.

Zindagi Tamasha premiered at the Busan International Film Festival, where it won the Kim Ji-seok Award. The story of this bi-lingual film revolves around Naat Khwan Rahat Khawaja (Arif Hassan), a devout Muslim who writes, composes, and even records hymns praising the Prophet. As the film goes on, Khawaja and his family find themselves ostracised from society when Khawaja's dark secret becomes public knowledge. According to the official synopsis, the film is a “scorching political commentary on little gods on this earth who police our private passions.” The film is seen as hinting at the misuse of religious laws in Pakistan.

Despite passing three Pakistani censor boards, a section of conservatives in Pakistan, especially the far right-wing Tehreek-e-Labbaik Pakistan (TLP), are claiming that this film is anti-Islam because of its portrayal of Khawaja. The TLP announced a countrywide protest on 22 January 2020 against the film because “it wrongfully portrayed those who recite hymns in praise of Holy Prophet (PBUH).”

A letter by Sindh provincial Board of censors shared on Twitter mentions that the board has put restrictions on screening of the film to the public as “it may create unrest within the religious segment of the society and may deteriorate and be detrimental to the peaceful circumstances in the country”.

Not banned. But reecomeneded for a 3rd review after being certified. Perhaps setting the ground for a ban https://t.co/neQXB1X2pA

After the objection of Tehreek-e-Labbaik Pakistan (TLP), Sarmad received massive online abuse and his personal details like ID and phone number were shared online. Global Voices talked to a digital rights organization that mentioned that they have informed and complained to Twitter about tweets sharing Sarmad's personal info.

On 16 January, Sarmad wrote an open letter to the Prime Minister of Pakistan Imran Khan and President Arif Alvi asking for their support to release his film. He wrote that he and his team were being bullied even though the Censor Board of Pakistan passed his film for countrywide release:

“It’s a story about a ‘good enough Muslim’ – there was/is no mention of a sect, party or faction of any sort. Neither in the uncensored version nor the censored one. If a bearded man is to be generically called a molvi (cleric), then trust me, this is/was a film about a good molvi (cleric). An empathetic and heartfelt story of a bearded man who is so much more than just that. He is a human being portrayed through a very humane eye. Well, forget it!”

The trailer for the film was also taken down from YouTube in the last week of December 2019 after some users took issue with the content of the clip. A statement was later released by Khoosat Films:

Khoosat Films took down the trailer from YouTube themselves. A trailer is just a tiny part of the entire film, there's no context so a few people had some issues regarding the content of that clip and we took that into account. After minor tweaks, we'll reupload it soon enough.

The revised trailer of the movie (in the Urdu language) is already up.

Under immense pressure, Sarmad Khoosat decided to stop the release of his film in Pakistan.

Getting dozens of threatening phone calls and msgs. Should I withdraw Zindagi Tamasha? pic.twitter.com/OJB396B1xq

However, after canceling the national release of his film online trolling against Sarmad didn't stop. There are continuous calls on Twitter to rally against the filmmaker and his team to stop the film. These accounts are continuously stereotyping this film as anti-Islam and blasphemous without citing exactly why. Posters are shared and countrywide calls for protests are still being made on social media to ban this film despite the fact that the filmmaker has already cancelled its release in Pakistan.

this whole zindagi tamasha debacle is another reminder of how helpless and frustrating it is to be a common citizen in this country. they're holding a film hostage for all the wrong reasons and there's nothing we can do about it.

Update: The Tehreek-i-Labbaik Pakistan (TLP) has announced that they will defer protests scheduled on January 22, 2020 in response to the decision of the Sindh and Punjab governments to block the release of the film Zindagi Tamasha.