Do you say àkàrà or bean cake? 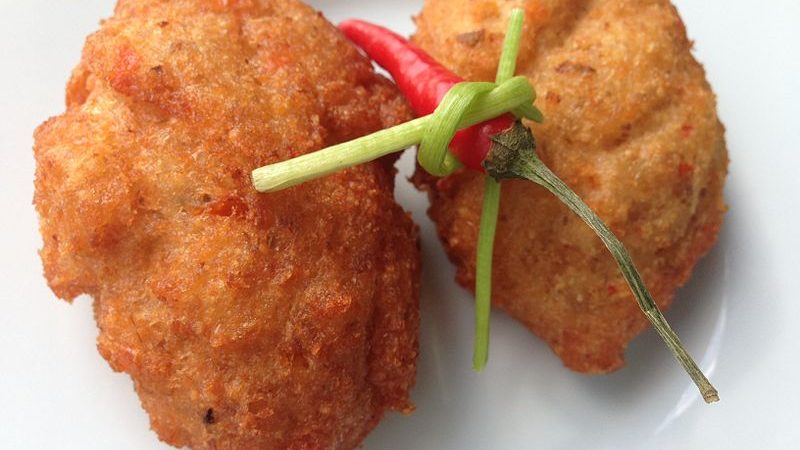 Àkàrà or Nigerian bean cake is a staple breakfast in Nigeria, July 11, 2013. Photo by Atimukoh via Wikimedia Commons, CC BY 2.0.

Relationships between languages have existed for hundreds of years. Think of the word “restaurant,” borrowed from the French language into English. Today, this loanword — a word adopted from one language into another without translation — circulates in English as if it was never borrowed.

The Yorùbá case is no exception. Spoken widely by about 40 million speakers in Nigeria, Yorùbá language has been influenced by the English language spoken by the British, who held colonial power in Nigeria from 1914 to 1960.

More than half of the vocabulary words used in Yorùbá are borrowed from English. Think of the word “cup.” It was domesticated as kó̩ò̩pù. The word “phone” is fóònù, “ball” is bó̩ò̩lù, and “television” is te̩lifís̩ó̩ò̩nù, among others.

These English words that were “loaned” to Yorùbá expanded its vocabulary over time. There are also instances of the Yorùbá language borrowing words from the Hausa language, spoken by 44 million people in the northern part of Nigeria. This language borrows heavily from Arabic, as well, with words like àlùbáríkà (“blessing”), àlùbó̩sà (“onion”) and wàhálà (“trouble”).

The beauty of Yorùbá loanwords is that speakers now use them in their day-to-day conversations as they get absorbed into the language.  It is not uncommon to hear people say, Bá o̩mo̩ ye̩n mú bó̩ò̩lu è̩  or “Help the child take the ball” in English.  Although the underlined word bó̩ò̩lu is not native to the Yorùbá language, speakers manage to make it fit.

One of the challenges with the Yorùbá language with regard to loanwords is that native speakers themselves love translating Yorùbá words into English and using them in sentences instead of the original Yorùbá word. An example is the word àkàrà  — most Yorùbá speakers translate it to bean cake in daily interactions —, especially with foreigners.

Using words in their original forms helps ensure that culture — kept alive through language — continues to thrive. For instance, no one calls Japan’s sushi by any other name — sushi is sushi.

If this was the case for many Yorùbá words, too, its language and culture could flourish beyond Nigeria and the Yorùbá-speaking world. For example, àmàlà is a famous Yorùbá food, even in the diaspora. This word could easily find its way into the lexicon of other languages if Yorùbá speakers insisted on it. Translating it to “yam flour” lessens its status and linguistic root — its “Yorubaness.”

Think of the anglicized Yorùbá word “fanimorious,” which is becoming more popular and appears in the Urban Dictionary. It means “appealing,” or “beautiful,” and comes from the word fanimó̩ra in Yorùbá.

This could be phono-morphological: Yorùbá language does not allow final word consonants and consonant clusters. As a result, the English suffix -ious was added to the Yorùbá root word. However, the fact remains that the word stems from the Yorùbá language. This is a win for the Yorùbá.

Recently, several other Nigerian English words were added to the Oxford English Dictionary.

Yorùbá will make giant strides only if its speakers contribute to its growth; Its usage in the media is also important as the world becomes increasingly more digitized. Consequently, this will spur further research on the Niger-Congo language.