Is there more to the Caribbean's single-use plastics ban than meets the eye?

Seven Caribbean nations say they're implementing a ban in January 2020 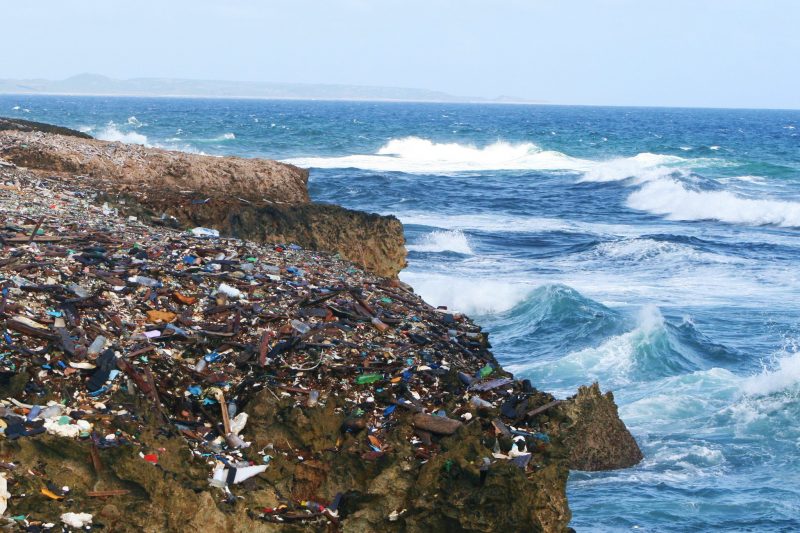 A compilation image showing the polluted north coast of Curaçao juxtaposed with the ocean. Photo by Bastian on flickr, CC BY-NC-ND 2.0.

The Caribbean has spoken out against single-use plastics and its inevitable environmental pollution for a long time.

In 2006, for instance, one Barbados-based blog advocated for the mandated use of biodegradable plastics; three years later, it suggested restrictions on the sale of plastic water bottles. In 2011, the Rotary Club of St. John in the U.S. Virgin Islands approached grocery-store owners about replacing plastic shopping bags with a more eco-friendly alternative, and in 2012, Haiti imposed a plastics ban that met with some resistance.

As the climate crisis worsens, however, both regional and international social entrepreneurs are emerging with recycling ideas and other possible solutions — like solar energy — to help offset the devastating effects of the crisis to which island nations are most susceptible.

Past measures notwithstanding, it is hoped that 2020 will be a year for clear vision when it comes to the scourge of plastic pollution in the region, with no less than seven Caribbean territories — the Bahamas, Barbados, Belize, the Dominican Republic, Grenada, Jamaica, and Trinidad and Tobago — supposedly banning single-use plastics and Styrofoam from January 1.

But the reality appears to be very different — at least in Trinidad and Tobago.

The Trinidad and Tobago situation

According to one industry stakeholder who spoke to Global Voices on the condition of anonymity, representatives from the Ministry of Planning met with manufacturers in December 2017, out of which a report was compiled examining the socio-economic implications of introducing a ban. The report included employment figures from the local plastic and styrofoam manufacturing sector.

By July 2018, stakeholders received letters announcing that the ban would affect the importation of styrofoam. This was confirmed by Minister of Finance Colm Imbert in his October 2019 presentation of the National Budget. The industry stakeholder explained, “It was never a ban on the material completely — and 60 percent of the styrofoam consumed in Trinidad and Tobago is made here, which means that only 40 percent has been banned. This gave local manufacturers a two-year timeline to prepare for the change and many of them expanded their production capacity, so the irony is we now potentially have more styrofoam in the market than before the ban.”

A failure to meet standards

These types of plastics, which include everything from bags and food packaging to water bottles and eating utensils, typically take hundreds of years to break down. In the case of Trinidad and Tobago, adding insult to injury was the fact that plastic and styrofoam producers were instructed to conduct trials, reportedly beginning in the final quarter of 2019, to determine the effects of using a chemical additive to their products to make the plastic biodegradable.

The industry stakeholder said that manufacturers circumvented these trials and went to full production with the use of the additive, producing a range of plastic products being advertised as “biodegradable” that are already on the market.

However, this is a false claim: it is scientifically impossible for a chemical additive to make a plastic product biodegradable. Kelvin Okamoto, an expert from the global standards body ASTM International, confirmed this in an awareness session on the standards for biodegradable and compostable materials, which was hosted by the Trinidad and Tobago Bureau of Standards on December 12, 2019.

That manufacturers are being allowed to fool consumers in this way infuriates environmentalists, one of whom spoke with Global Voices, also under the condition of anonymity. He said such tactics are outlawed in the European Union, and in the United States, a company got banned for using the additive and stating their products were biodegradable.

Okamoto confirmed that such product misrepresentation is illegal in the United States. Offending companies that do not meet the required standards pay fines and are prohibited from continuing false advertising.

The region is a huge plastic polluter

According to Forbes, of the world’s 30 largest per capita polluters of single-use plastics, 10 are from the Caribbean — Trinidad & Tobago, Antigua & Barbuda, St. Kitts & Nevis, Guyana, Barbados, St. Lucia, Bahamas, Grenada, Anguilla and Aruba —  and “generate more plastic debris than the weight of 20,000 space shuttles:”

The move to go plastic-free is therefore quite timely, especially in light of the fact that United Nations Secretary-General António Guterres noted, in June 2019, “If present trends continue, by 2050, our oceans will have more plastic than fish. The message is simple: reject single-use plastic. Refuse what you can't reuse. Together, we can chart a path to a cleaner, greener world.”

According to the UN Environment Programme, as much as 70 to 85 percent of marine litter in the Caribbean originates from land, and the lion's share of it is plastics. Together with agrochemical run-off and domestic wastewater, it is one of the region's top three environmental pollutants.

Some islands seem to be getting it right

Antigua and Barbuda pioneered the regional move away from plastics in 2016 with a multi-pronged approach to ending its plastic dependency: The government integrated the ban into the country's existing Litter Control and Prevention Act, launched an awareness campaign, and made approved plastic alternatives available to the public. Bagasse, for instance, the fibrous, post-sugarcane harvesting residue, can be used in the manufacture of containers, as well a biofuel for energy production.

With public education ongoing, the country did see tangible results: The proportion of plastic at landfills declined from 19.5 percent in 2006 to 4.4 percent in 2017. Statistics like these should be encouraging to other regional territories, the economies of which depend primarily on tourism.

In Jamaica, the government has been pushing an anti-plastic initiative on social media:

Let’s make the environment healthy by supporting the ban on expanded polystyrene foam. Our Future depends on it. #SupportTheBan #PlasticFreeJa #FoamFreeJa ♻ pic.twitter.com/7bg8fFqeFN

Netizens have been quite responsive:

The Jamaican government has given citizens a grace period because the shift away from single-use plastics is more complicated than the plastic bag/straw ban adopted in 2019. However, all required legislation was passed in Jamaica's parliament and the ban will be enforced.

Actions like these are backed up by initiatives to which many Caribbean nations are signatories, including Clean Seas, and the legally binding Cartagena Convention, through which policies like the Land-Based Sources of Marine Pollution Protocol and the Caribbean Regional Action Plan for Marine Litter (RAPMaLI) are implemented.

In Trinidad and Tobago, though, environmentalists are frustrated over the fact that the government does not seem to understand how reducing plastic waste can help improve the country's environmental and economic outlook. Less plastic pollution can help reduce flooding from clogged waterways, lower the risk of mosquito-borne diseases and food chain contamination. Unsightly litter, which creates a sense of despair for citizens and a bad first impression for visitors, would also lessen.

“Trinidad and Tobago has a waste management problem,” says our stakeholder source, “which has only got worse since China stopped accepting the world's plastic. “We need reform, but the policies are making it more difficult.”

The Ministry of Planning has another meeting carded for January 22, 2019. Legislation to address single-use plastics and styrofoam resides with the Ministry of Legal Affairs, according to various stakeholders who spoke with Global Voices.