Despite legal threats and harassment, thousands join the ‘Run Against Dictatorship’ in Thailand

It was the biggest protest against the military since 2014 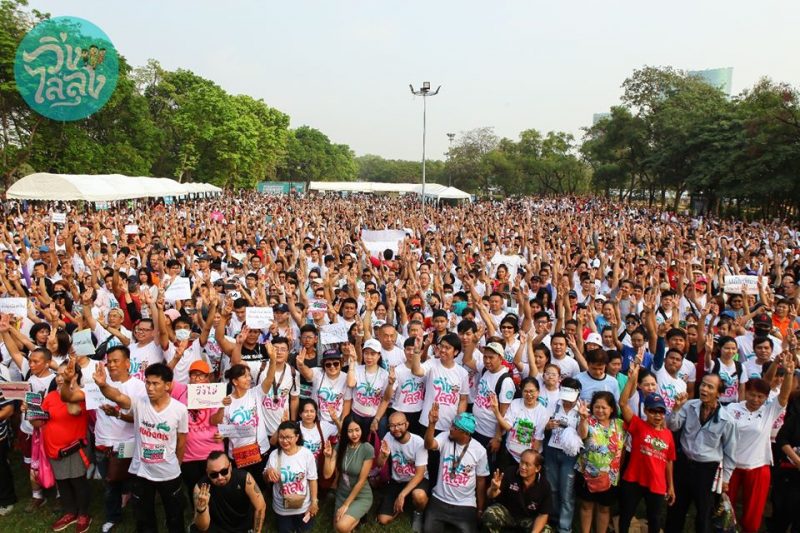 Thousands joined the protest run in Bangkok. Photo from the Facebook page of ‘Run Against Dictatorship’

On 12 January 2020, an estimated 13,000 people joined the ‘Run Against Dictatorship’ in Bangkok, Thailand despite threats of arrest and police intimidation. Several fun run events with the same theme were also held in other provinces, and even in other countries.

It was the biggest protest against the government since the army grabbed power in 2014. Elections were held in 2019 but critics said the military continued to dominate bureaucracy. The incumbent Prime Minister Prayuth Chan-ocha was the army chief who led the coup in 2014.

The event was organized to show the continuing public clamor for the restoration of democratic rights. Themed ‘Wing Lai Lung’ which means ‘Run to Oust the Uncle’, it refers to the Prayuth government which is accused of restricting the civil liberties of citizens despite the supposed end of military rule.

Since December when the event was launched, organizers said their members have been harassed by authorities across the country. In some provinces, permits were canceled by local governments. Activists suspected of organizing the event were interrogated by the police.

Days before the 12 January event, the Bangkok Post published an editorial criticizing the antagonistic response of some officials:

The reactions by the authorities and intimidation tactics are not just wrong but also absurd. Yet, it no laughing matter either. As the country has returned to democracy, no citizen should face such intimidation.

The Thai Lawyers for Human Rights released a legal primer defending the rights of the participants of the protest run:

Run Against Dictatorship is a legitimate expression approved by the Constitution. If the organizers of the event do want to arrange it in the form of rally or public assembly, they must notify the police. The police, however, have no power to prohibit the activity.

The Twitter hashtag #วิ่งไล่ลุง (#RunAgainstDictatorship) trended in Thailand on 12 January. Below are some photos of the event:

#Chiangmai and around #Thailand today, host the #RunAgainstDictatorship. The peoples take the streets in order to call for dictator gov't , #Prayuth to go & return country to real democracy and we demanding political participation, democracy, human rights and #developmentjustice pic.twitter.com/qjhmnCq2Xh

Meanwhile, pro-government supporters organized an assembly on the same day with the theme ‘Dern Cheer Lung’ (Walk-In Support of Uncle). Around seven to eight thousand people joined the assembly which was also held in Bangkok but in a different park.

At the same time as the #วิ่งไล่ลุง #RunAgainstDictatorship, a crowd has also built in Bangkok to support Prime Minister Prayuth Chan-ocha with hashtag #เดินเชียร์ลุง Crowd not nearly as big as the other event but definitely over a thousand here. pic.twitter.com/sUReBCA8I4

Emboldened by the success of the ‘Run Against Dictatorship’ event, organizers said they are now preparing for the next run which will be held in Chiang Mai, north of Thailand, on 2 February.