‘An interplay between Western and Eastern Cultures': Two art exhibitions on cultural collisions 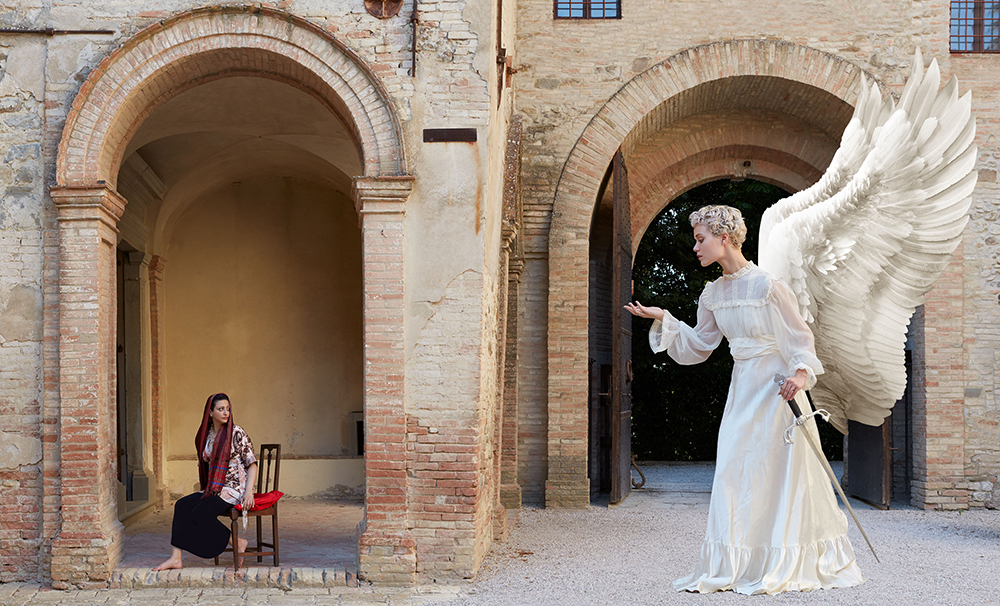 Two women artists from Iran and Pakistan recently exhibited new bodies of work in New York, in which they portrayed the interplay between Western and Eastern cultures, evoking histories of iconography and the way women, in particular, are represented by others in canonical art history.

In an interview with Global Voices, the artists, Negin Sharifzadeh and Qinza Najm, stated that by using contemporary tools such as photography and animation they aimed to “question traditional narratives.”

In each case, the artists appropriated works from the Western canon, then inserted themselves in a tension of opposition and integration, subversion and homage, by claiming agency over their own bodies and the right to sit within positions of power inside art, history, and society.

Negin Sharifzadeh, a cross-disciplinary artist and storyteller based in Brooklyn, New York, received her BFA in sculpture from Tehran University in Iran in 2002, and her BFA in Performing Arts from the School of the Art Institute of Chicago in 2010.

In her show “Appearance Stripped Bare,” Sharifzadeh interrogates the concept of the European Renaissance as an isolated phenomenon rather than a period in organic conversation with movements that had started earlier in the Middle East.

In Italian Renaissance paintings such as “Annunciation,” by Pierro Della Francesca and “Lamentation of Christ,” by Andrea Mantegna, Sharifzadeh appears sometimes as Mary, sometimes as Jesus, sometimes as herself simply observing. 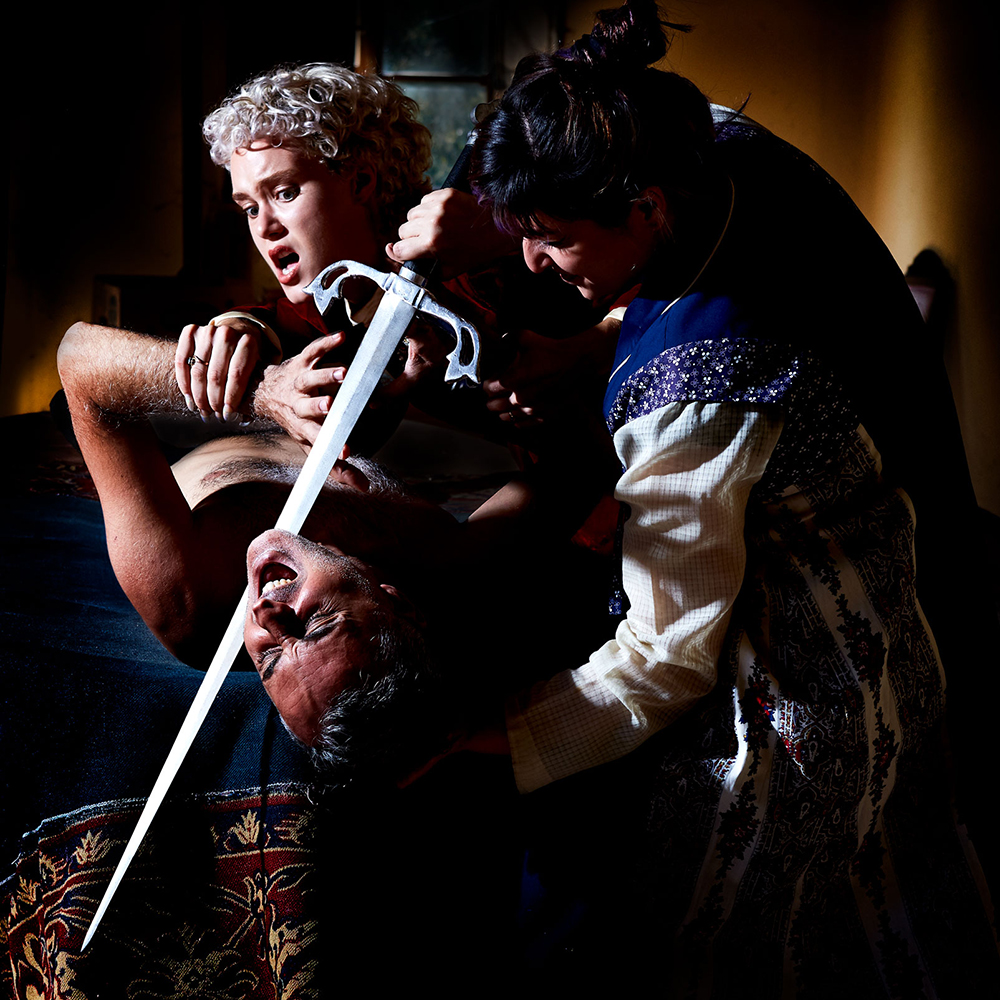 “I have placed myself into photographic recreations of iconic paintings from the Italian Renaissance, creating works that are simultaneously homage and subversion, with the aim of exploring the impact of the broader Mediterranean culture, art and ideas that helped spark and inform Europe’s rebirth,” Sharifzadeh said.

“Too often,” she added, “art historians have placed European arts in a position of privilege, exorcising and minimizing arts from the broader Mediterranean regions. Through this re-contextualization and reclamation, I aim to challenge the very idea of European and Middle Eastern otherness.” That re-contextualization and reclamation occur as Sharifzadeh places her own contemporary, Middle Eastern, female body within the imagery, iconography, and physical geography of the Italian Renaissance.

Her work is also a commentary on present-day cultural collisions.

“Negin’s point of view, influenced by her Iranian identity and her American life, is very remarkable as it is able to inspire a sense of dialogue and reconciliation, very precious in the current political turmoil,” said curator Giulio Verago, director of Via Farini Artists-in-Residence in Milan. “The use of irony, especially in a time of great depression and disillusion, celebrates the freedom of artistic expression. She takes into account the divergences in the representation of the female body between East and West—how, for instance, the influence of classical representation of female nudity gave shape somehow to the way we see women’s bodies and women’s desires and ambitions nowadays.” 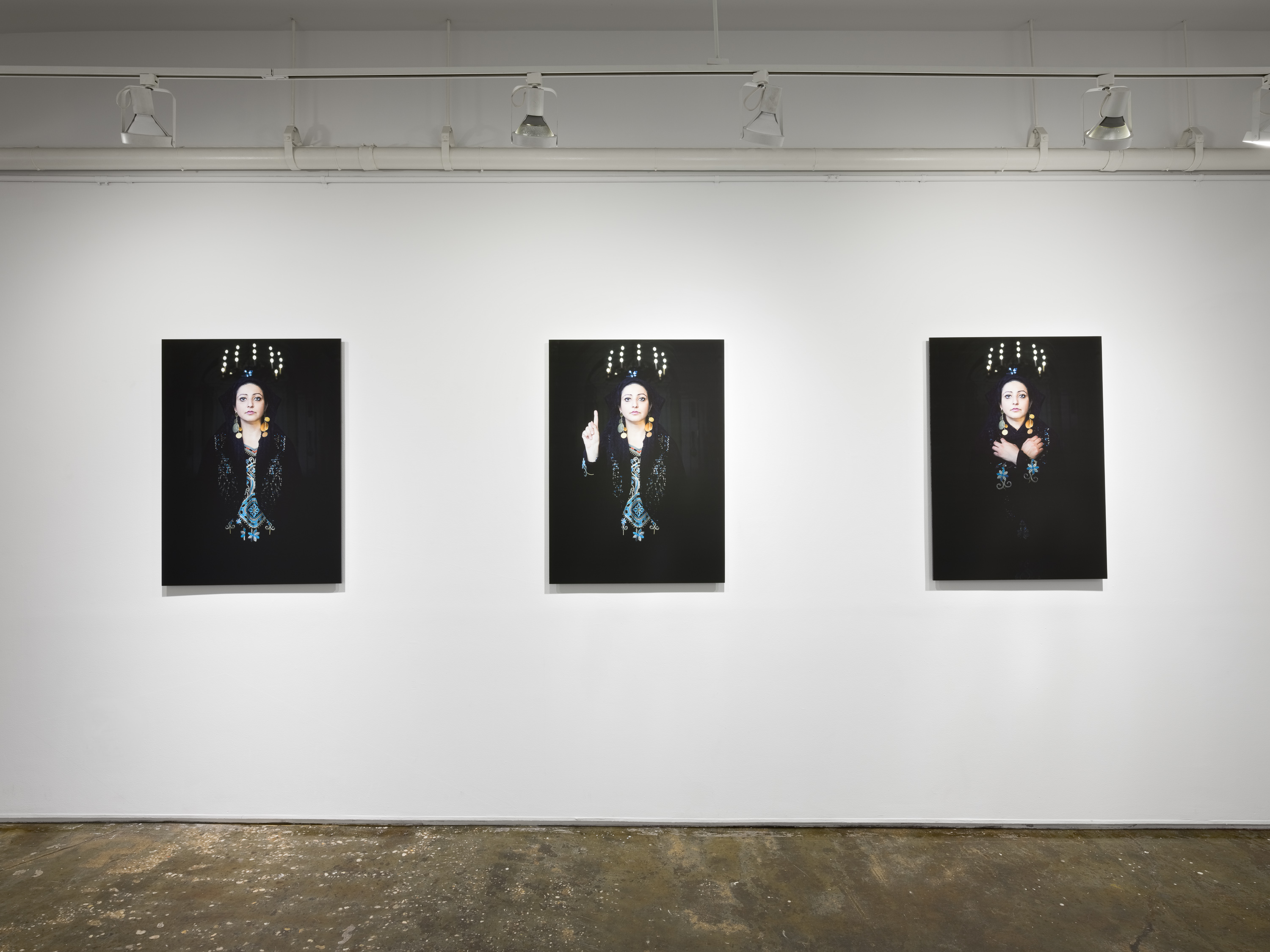 Sharifzadeh said that she has brought lots of questions to the forefront about the exchange of art and architecture between the Italian Renaissance and its broader Mediterranean Ottoman Empire. “Hopefully, these conversations will make my audience more curious about that specific era with the silver lining [being an awareness] that our interconnectedness through arts and culture has been a phenomenon throughout history.”

Pakistani-American Qinza Najm, born and raised in Lahore, pursued her studies in fine arts at Bath University in the UK and The Art Students League of New York. Originally trained as a psychologist, Najm uses performance, video, painting, and other mediums to create empathy and understanding between societies and cultures in order to address the deepest social traumas.

Drawing from a broad swath of art history, Najm uses a wide range of techniques to “break the frame.” For instance, her “stretched carpets” works take the Persian-style rug, ubiquitous across much of the Middle East, and emblazons the carpets with elongated female figures that explore the contradictions and cultural clash between contemporary life and the reactionary traditional world. One powerful work in the show, based on an earlier performance piece, was “Veil of Bullets,” which depicts Najm encased in a 40-pound veil made of a fishnet and 1,100-plus empty bullet casings representing both the honor killings in Pakistan during the previous year as well as the 1,100 children and adults killed during school shootings in the United States. 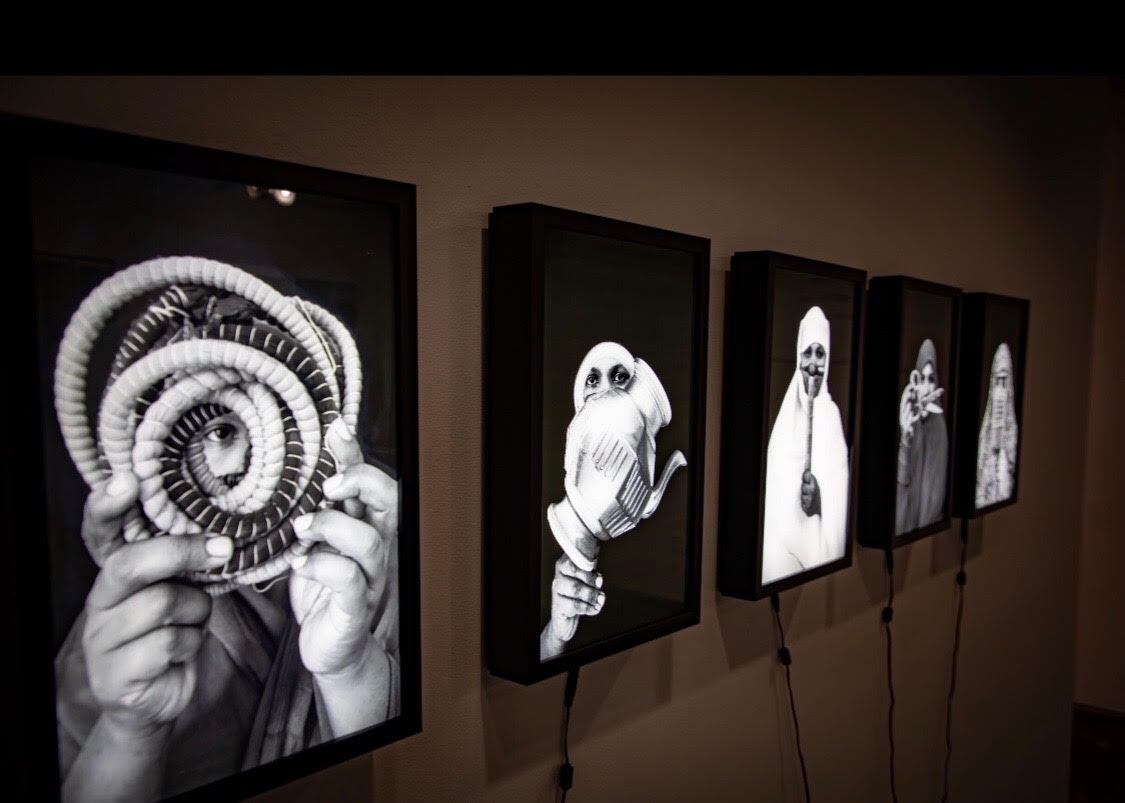 In another series, “The Story of Rashida,” Najm explicitly explores gendered violence and female subjectivity. She does this using photos of her own mother, cousins and friends holding quotidian household objects—from cheese graters to scissors—that have been used against women as tools of domestic violence in Pakistan, a country where honor killings are still a pervasive and sanctioned practice.

The exhibition’s title, “Still, I Rise,” refers to a poem by Maya Angelou that celebrates female empowerment in the context of slavery and black culture. Curator Tami Katz Freiman explained that “Najm chose words that promise redemption, thus endowing her personal story with a universal feminist context, while also attending to the themes of empathy, generosity, transformation and change.”

“Her fluid movement,” Freiman added, “between different disciplines is illustrated in this exhibition which features a selection from four bodies of work that resonate with one another.”

“I am interested in the body as both medium and subject—the circumstances surrounding its physical occupation of space, the norms and laws that govern bodies as political subjects, and the uneven burden these norms often place on women and minorities,” writes Najm in her statement for the exhibition, adding that, “drawing from my upbringing in Lahore, Pakistan, and adulthood in the United States, my sculptures, installations, and performances address gender politics, displacement and cultural power through lenses of geography and social identification.”

In her art Najm says she often uses “…motifs of bodies stretched, deconstructed, distorted, and pushed beyond their limits. A manipulated body is a reflection of how power is exerted on our being. However, I am more interested in the depiction of human potential—an extended body claims space beyond its expected role, both physically and figuratively. In particular, I aim to raise questions about how we might transcend and combat cultural stereotypes, prejudice, displacement and sexist norms.” 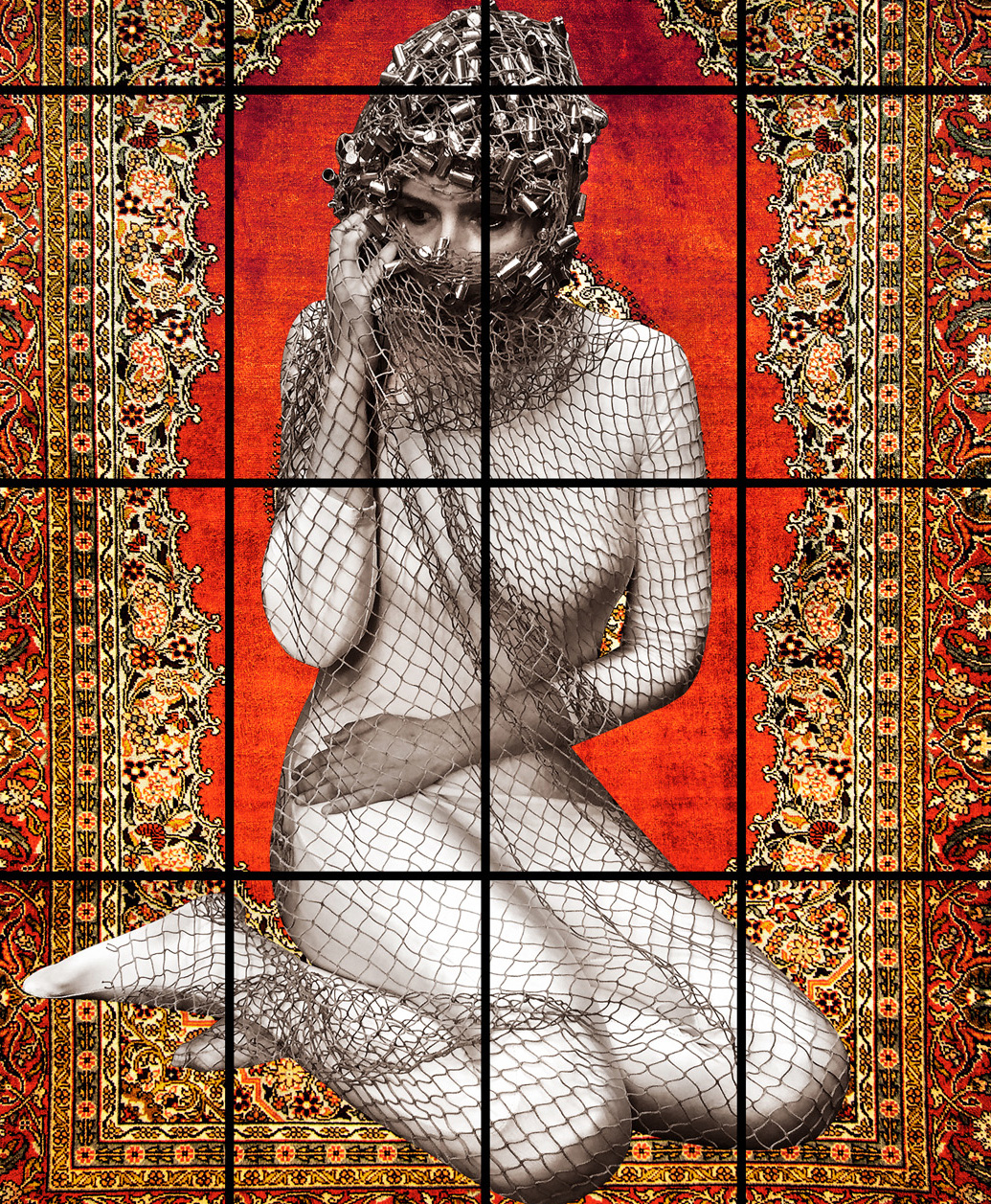 Najm told Global Voices that the theme of violence is universal, and possibly it can bring us together through the empathy and compassion that is currently missing in the international dialogue of the East and the West, dividing narratives and what media portrays, especially between the U.S. and Islamic countries.

“This exhibition and the conversation the came out of the exhibition is giving me material to take the dialogue of this exhibition further,” she emphasized. “I am excited to see what comes out of it and I like to surprise myself through taking more risk and experimentation.”

Both “Appearance Stripped Bare” and “Still, I Rise” evoked histories of iconography and the way women, in particular, are presented by others in canonical art history. The artists are reclaiming this representation as a site of power, using the contemporary tools of photography and animation to question those traditional narratives. Both shows powerfully interrogated the role of women across the boundaries between Western and Eastern cultures and, through their art, claimed an agency over their own bodies and their right to sit within positions of power inside art, history, and society.