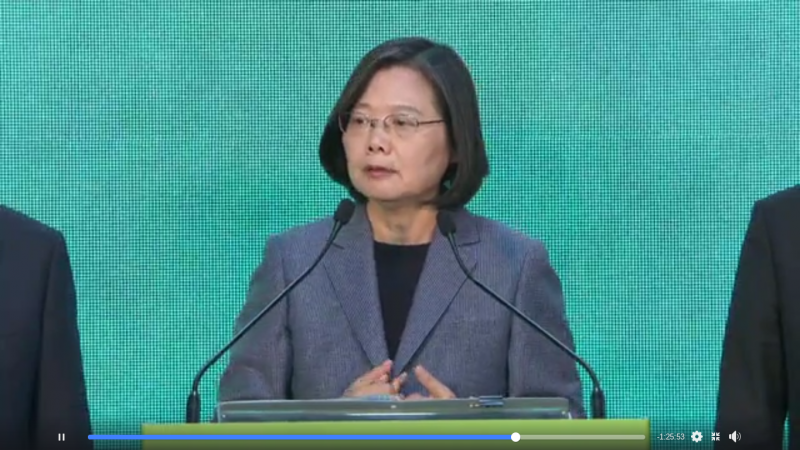 Screenshot from the live streaming of Tsai Ing-wen's victory speech.

The original post is written by Pei-ju Teng and published on Hong Kong Free Press on January 11, 2020. The following version is republished on Global Voices under a content partnership agreement.

“Taiwan is showing the world how much we cherish our free and democratic way of life,” Tsai said at a press conference at 9pm on Saturday January 11, where she confirmed her victory.

A jubilant crowd of supporters outside the Democratic Progressive Party (DPP) headquarters in Taipei burst into cheers as Tsai appeared on stage to address reporters.

Tsai polled comfortably ahead of her main contender Han of the Kuomintang Party after voting closed at 4pm on Saturday. 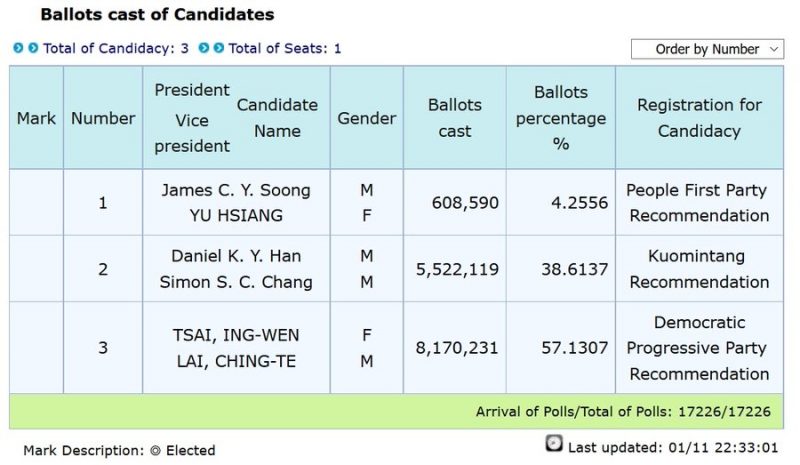 Over 14 million people voted, representing a 74.1 percent turnout, which is around 8 percent higher than 2016, but lower than Taiwan's early democratic elections.

As to the 113-seat legislature, the Democratic Progressive Party has kept its majority with 61 seats, but with a slightly reduced margin, down from 68 in 2016. The Kuomintang has gained three seats from 35 to 38.

In her initial remarks, Tsai thanked her supporters and urged them to put aside their political differences in order to embrace opponents “under the banner of democracy”:

I want to once again call upon Beijing authorities to remind them that peace, clarity, democracy and dialogue are key to positive cross-strait interactions and long-term development. I also hope that Beijing authorities understand that democratic Taiwan and our democratically-elected government will not concede to threats and intimidation.

At around 8:45pm, Han declared defeat in Kaohsiung – where he is mayor – in front of a crowd of supporters who expressed disappointment at the electoral loss of their preferred candidate.

“I have already made a phone call to President Tsai Ing-wen, to congratulate her [on the victory],” Han told supporters. He added that he had not put enough effort into his election campaign and failed to meet the expectations of his supporters.

Han said he would return to the municipal office in Kaohsiung next Monday to continue his responsibilities as the mayor. However, he is also facing a recall petition filed by civil groups and the pro-independence Taiwan State-building Party last December which calls for his resignation.

In response to the election failure, KMT Chairman Wu Den-yih announced his upcoming resignation, along with 11 top-ranking KMT officials, including vice chairmen and secretary-general, at the party's Central Standing Committee next week.