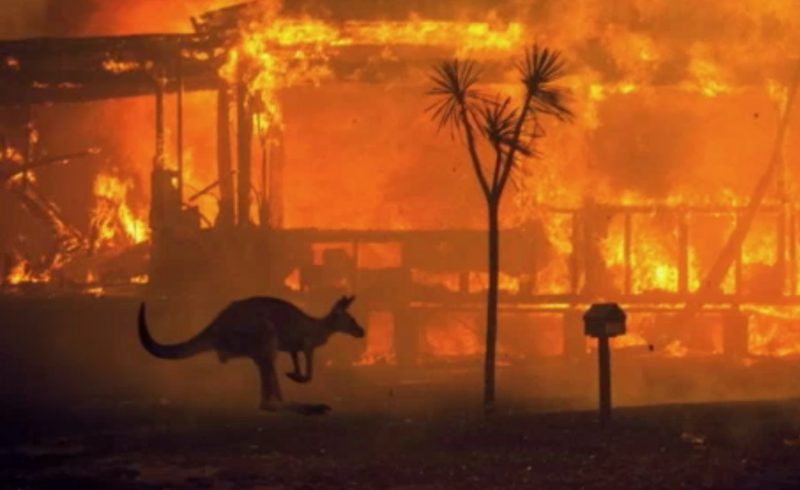 In the latest estimates [2], over 100,000 square kilometres (40,000 sq miles) have been burnt, more than 2,200 homes destroyed, 28 people have lost their lives and countless livestock and wildlife have been killed. One estimate [3] puts the loss of wildlife at over one billion, with hundreds of billions of insects possibly dead.

On top of the extensive coverage by mainstream media, the nation’s social media outlets have been consumed by the unfolding catastrophe.Twitter, Facebook, and other platforms have been abuzz with news of outbreaks, emergency warnings, evacuations, and endless updates.

The political and environmental dimensions have been worked over from one end of the continent to the other.

The leadership of Prime Minister Scott Morrison has been widely condemned. Morrison returned early from a family Christmas holiday in Hawaii after extensive criticism back home. Many considered his excuse lame in the extreme:

How real is this man?

Numerous short videos have been posted recently on recent Tiktok, a video-sharing networking service popular with young users and audiences, using the hashtag #ScoMo and attracting over 11 million views. They include this one from @onedavidofmany:

After his return, the PM was slammed for his delay in approving compensation for voluntary firefighters:

He was also slammed online for inaction and for holding a New Year’s Eve party at his official Kirribilli residence on Sydney Harbour:

Our country is leaderless & while it burns, instead of being the leader we need & want, Mr “I can't hold a hose” Morrison is having a NYE party.

‘Cos that's what u do when you r a feckless, spineless, rudderless #ScottyfromMarketing [9] ?

Singer-songwriter Tex Perkins [11] added fuel during the NYE celebrations by singing ‘The honeymoon is over':

The PM’s attempts to deflect calls for a change to his government’s climate policy were not welcomed by many down under or globally. Australia had been roundly criticised [14] at the United Nations’ December climate conference in Madrid for undermining progress at the talks.

His perceived lack of action [15] played out on several fronts. He had declined to meet with 23 former emergency services leaders who were warning about the severity of the coming fire season and seeking extra resources:

After his surprise election victory in May 2019, Morrison's skills as a people person [20] had been praised as an electoral asset. However, his public image soured [21] considerably when visiting fire-ravaged communities. He was abused by locals and his poor interpersonal skills were attacked when dealing with people who refused to shake his hand:

Of ALL the things you could have spent #taxpayers [37] money on during this “unprecedented” (which you were warned about) national crisis you spend it on an AD?!! This beggars belief. Too late to shut the gate now #ScottyfromMarketing [9] …the horse has bolted https://t.co/K967N9Kh4K [38]

Even this show of action backfired somewhat following a serious communications breakdown with the New South Wales Rural Fire Service:

“The NSW RFS commissioner, Shane Fitzsimmons, said neither he nor defence force personnel working from the state control centre were informed by the prime minister, Scott Morrison, of a plan to deploy 3,000 army reservists to assist in the bushfire crisis” https://t.co/2nG6LeHvsy [40]

Graham Young, a climate skeptic and director of the Australian Institute for Progress, responded [42] to criticism of Scott Morrison's Liberal National government on TRT, the Turkish public broadcasting service. Graham and some of those who commented on the video on his Facebook post [43] were also concerned that “there is a lot of running Australia down”.

The PM has had some success in raising hazard reduction [44] (prescribed burns outside the fire season) and arsonists have been pointed at as the cause of many fires. The Greens party and environmentalists have been blamed despite denials:

The debate has played out on the #ArsonEmergency [47] Twitter hashtag. Accusations of misinformation and disinformation have become common on both sides. BBC News presenter Ros Atkins's response was popular:

Ros fronts IMO one of the best current affairs shows in the world. Want to REALLY know the score on these wild claims? Try this. #AustralianBushfireDisaster [48] https://t.co/lVykYBU4Bp [49]

Research has pointed to a deliberate campaign of disinformation:

This is HUGE deal. There is already an organic + coordinated effort to spread the ‘arson’, and partly the ‘eco terrorist arson’ narrative around the worldhttps://t.co/X4DnhFbZIT [51]https://t.co/sdiF83VR7P [52]

But it isn't just social media. It's traditional media. Guys in offices.

Victoria Mollison called out one media empire for leading this:

We need to come to terms with the fact this orchestrated campaign is coming straight out of the Liberal National Murdoch propaganda machine. Australia is facing a national climate crisis, and at the same time we need to address a political media crisis.https://t.co/iL0fHOEsXx [54]

The New York Times has a detailed examination [56] of critics of Rupert Murdoch's News Corp, who see it as “a concerted effort to shift blame, protect conservative leaders and divert attention from climate change”.

The bushfire season still has a long way to go, so the PM will be hoping that his announcement of $AU 2 billion [USD 1.4 billion] for a national bushfire recovery agency [57] helps to contain his negative political fortunes of late.