Will 2020 be the year of the Nigerian girl and woman? 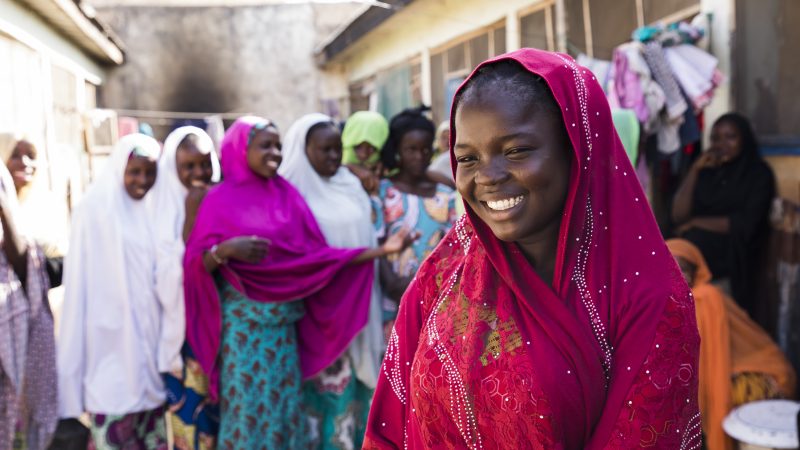 Aisha Mohammed, 17, thinks education is playing a vital role in rebuilding her self-confidence and hope for the future in northeastern Nigeria. Photo by Erick Gibson, Creative Associates International/USAID via Flickr, public domain.

The year 2019 saw major movements, both on- and offline, to advance the rights of girls and women in Nigeria. Will 2020 continue this momentum?

2019 has been the year of Nigerian women standing up & speaking out. Yaba market protest, the simultaneous protests in Abuja and Lagos calling for the head of Pastor Fatoyinbo & now the BBC Africa Eye doc on lecturers who ask for sex from female students. And many more examples

In October 2019, women and girls in Kore-Kulani, Gombe state, in northeast Nigeria, marched against child marriage, where the practice is still legal and widely practiced.

In 2017, the United Nations Children’s Fund reported that over 43 percent of girls in Nigeria are married before the age of 18. Twelve out of 36 Nigerian states have not adopted Nigeria’s Child Rights Act 2003 and still lawfully practice child marriage. Many poor families in these states still rely on early marriage to stabilize their precarious economic conditions.

Human rights activists have argued that the term “child marriage” itself is misleading because girls do not voluntarily marry and that the early “marriage” of young girls is actually a form of sexual abuse, according to DevEx, a development website.

Speaking out against sexual violence

The Gombe protest against early marriage came on the heels of Nigeria’s recent uproars against sexual violence and prejudice against women in Nigeria. 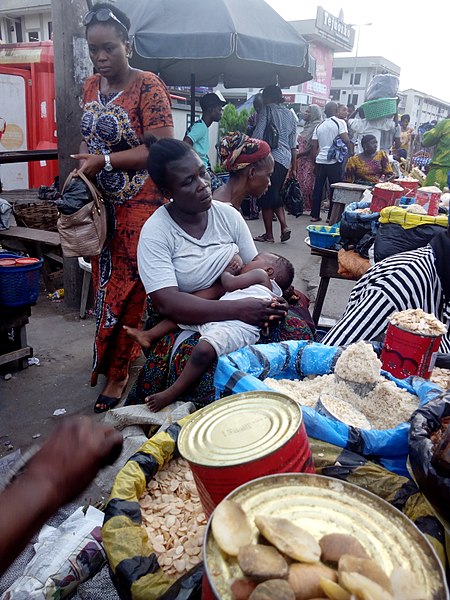 A woman at a market in Nigeria breastfeeds while selling ingredients for soup, November 3, 2017. Photo by Cynthia Chukwufumnanya Ikem via Wikimedia Commons, CC BY 4.0.

In early 2019, in Nigeria’s northern region locally known as Arewa — perhaps the most conservative part of Nigeria — many women collectively raged against sexual violence, both on- and offline, under the hashtag #ArewaMeToo. This happened when a young woman decided to divulge her own personal experience with an abusive relationship on Twitter. A wave of similar stories followed, according to Quartz. “ArewaMeToo provided a platform for many to voice shelved parts of their lives they had never shared before,” wrote journalist Fakhrriyyah Hashim.

In late 2018, the Market March movement took off as a direct reaction to constant harassment and violence against women in Yaba market, a popular open-air market in the heart of Lagos state. The march soon spread to other markets around the country throughout 2019. Women reported that harassment at the market had reduced as a result of the march, and women throughout Nigeria who had experienced similar plights then organised marches in their local markets.

This Twitter netizen said her “smooth” visit to Yaba market was a testament to the market march:

I just want to use this opportunity to say thank you to every single woman that went on the Yaba Market March.
You wonderful women have done more than you think – I walked into the market and it was smooth.
One man tapped my hand and his colleague was like ‘no touch am’

And this netizen wrote that things were not perfect but gradually getting better:

Truth be told, I had similar experience not long after the match. The guy said “I'm not going to touch you, just tell me what you want to buy”

However, there was another who held my hand and when I asked why, he said “your face cool”.

We are getting there gradually.

Saturday's march was a great first step into a long but tireless & determined journey towards bringing an end to sexual harassment & bullying at Ogbete Market. pic.twitter.com/7zpQUCCB1A

The #ChurchMeToo hashtag spoke to a country-wide protest against pastor Biodun Fatoyinbo the general overseer of a popular Nigerian church, Commonwealth of Zion Assembly (COZA), highlighting the church’s complacency in Fatoyinbo’s sexual misconduct against celebrity photographer Busola Dakolo, who accused the pastor of raping her when she was 16.

The allegation against Fatoyinbo broke on social media as a result of an interview with Dakolo in the Nigerian magazine YNaija, which was published on YouTube on June 27 and 28, 2019 respectively. This led to protests in front of COZA churches organised intentionally to clash with Sunday services.

On November 14, 2019, an Abuja High Court judge awarded a one million naira [about $ 2,700 United States dollars] fine against Dakolo for abusing “the judicial process,” because the case is “empty and purely sentimental.” However, Dakolo’s lawyers insist that Fatoyinbo remains a suspect in court.

The court may not have agreed with the protesters or Fatoyinbo's alleged victims, but it led to head pastors from other churches to chime in on the matter, some denouncing Fatoyinbo; The Vanguard reported that the Pentecostal Fellowship of Nigeria (PFN) declared that the embattled pastor is not one of its members. Citizens also condemned the church on- and offline, and some COZA members publicly denounced the church.

Boniface Igbeneghu, a professor at the University of Lagos, was exposed in the documentary making demands for sex with an underage high school graduate who sought admission to the university.  Igbeneghu has since been fired by the university and denounced by his church where he was a pastor.

Nigerian women lending their voices to the fight against sexual violence — on- and offline — has triggered a ripple effect, where more and more women are rising up and making noise against sexual harassment and oppression.

Women’s rights advocate, Rabiu Salisu Ibrahima, told Deutsche Welle (DW) that education and constant campaigning is one of the best tools for the fight against child marriage, for example. Ibrahima said that child marriage is more of a cultural issue rather than a religious one and proposed a combination of constant advocacy, girl child education and adult education as the recipe for change.

With luck and hard work, 2019’s intentional protests against gender-based oppression will be a catalyst that forces the Nigerian government to make women’s rights and wellbeing a priority in 2020.