It allegedly started because of "altercation between two Muslim groups" 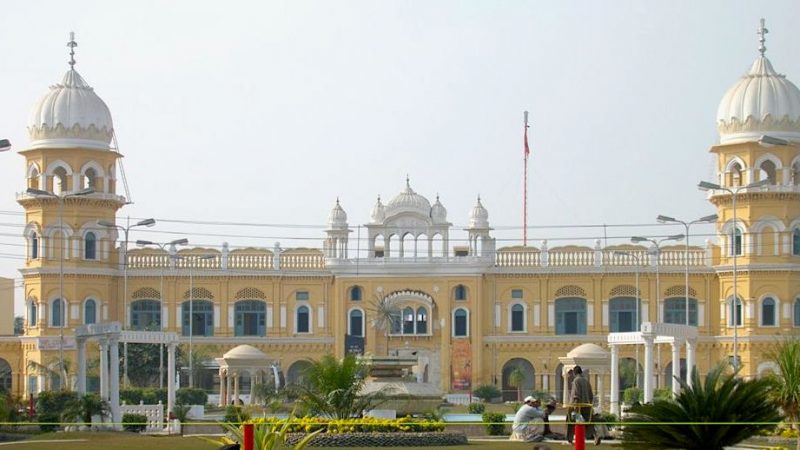 Gurdwara Janam Asthan (also known as Gurdwara Nankana Sahib), is a highly revered gurdwara located in the city of Nankana Sahib near Lahore Pakistan. It was built at the site where the founder of Sikhism, Guru Nanak, was believed to be born. Image from Flickr by Hemanshu Kumar. CC BY-NC-ND 2.0

Last week the #NankanaSahib hashtag was trending on social media in Pakistan after a large number of protesters surrounded the Gurdwara Janam Ashtam at Nankana Sahib and threatened to ransack the Sikh holy site. The mob used hateful slogans against the Sikh minority community and pelted stones at the Gurdwara.

In a statement issued by the Pakistani Foreign Office on 3 January 2020, officials blamed the incident on an “altercation between two Muslim groups”. Reports said customers at Zaman's tea stall in front of Gurdwara Janam Asthan were in an altercation which resulted in the arrest of the tea stall owner and some members of his family who were also involved.

Although the altercation was unrelated, the owner's nephew, Muhammad Hassan, made news recently for allegedly forcing a Sikh girl to convert to Islam in order to marry her.

On learning of the arrest of his uncle, Hassan’s brother Imran Chishti assumed that they were at the behest of the Sikh Community. In response, Chishti gathered a group of people who attacked the Gurdwara.

Videos circulating on social media showed the mob hurling abuse. Imran Chishti was seen threatening the Sikh community saying that Nankana Sahib’s name should be changed to ‘Ghulaman-e-Mustafa’ (meaning slave of Mustafa, the Prophet Muhammad’s other name) and all Gurdwaras would be converted to Mosques.

The incident was condemned on social media with demands that the government intervene immediately to resolve the issue. Shiraz Hassan, a journalist, shared the video and asked where government was:

People from #Sikh community are stuck inside the Gurdwara and many are in their homes fearing mob attacks #NankanaSahib – where is the writ of the government???? https://t.co/m5D91sAjZG

In a Tweet. the Human Rights Commission of Pakistan also criticised the incident:

HRCP is alarmed by the situation that has emerged today in #NankanaSahib where a mob gathered outside the Gurdwara.

Imran Chishti later apologized for instigating people, however, he was arrested by the police who registered a criminal case against him.

Translation: I apologize for all that happened in Nankana Sahib, this was not the intent. In the height of emotions, I said things which should not have been said. I would like to apologize to the Sikh community for my actions. We have been living as brothers for ages and will always respect them and their place of worship.

Harmeet Singh of the Young Singh Sewa Society Sri Nankana Sahib spoke to Global Voices about his experience inside the Gurdwara as it was being attacked:

I was inside the Gurdwara when the incident happened. We were preparing for the evening prayer for Guru Gobind Singh. A large crowd gathered outside chanting slogans [it] was very disturbing as something like this had never happened before. We were scared that they would damage the Gurdwara but the police (arrived and) handled the matter amicably.

Federal Minister for Human Rights Shireen Mazari has not issued a statement on the incident, however, the Prime Minister of Pakistan Imran Khan tweeted:

The major difference between the condemnable Nankana incident & the ongoing attacks across India on Muslims & other minorities is this: the former is against my vision & will find zero tolerance & protection from the govt incl police & judiciary;

Many netizens celebrated after the culprits were arrested.

No one will be allowed to spread Hate in the name of religion; No one will be above law in #Pakistan ??
The main culprit of #NankanaSahib incident is ARRESTED!!
This is #NayaPakistan led by #PMIK ; Rights of minorities will be protected on every cost. IA pic.twitter.com/smCAIy2fmK

Meanwhile future ministers are beating up students in #JNUViolence in India. https://t.co/H4Vq0HFZo0

Interior Minister Brigadier Ijaz Ahmed Shah (Retired) visited the Nankana Sahab and assured the Sikh community that the culprits would be brought to justice.

Interior Minister visits #NankanaSahib,meets sikhs & all stakeholders.Orders charging the culprits with #blasphemy and hate-speech sections to strictly penalise elements who tried to incite communal feelings outside Gurduwara.Sikh-Muslim friendship wl be protected at all levels✌? pic.twitter.com/1o3z3j5gUX

The Pakistan’s Foreign Office further said, the Gurdwara remains untouched and undamaged. All insinuations to the contrary, particularly the claims of acts of ‘desecration and destruction’ […] of the holy place, are not only false but also mischievous.”

This is not the first time a religious site or minorities in Pakistan have been attacked. A number of cases related to forced conversion of Hindu and Christian girls, or of Muslim men forcefully converting non-Muslim girls to Islam and then marrying them have been registered by the police.