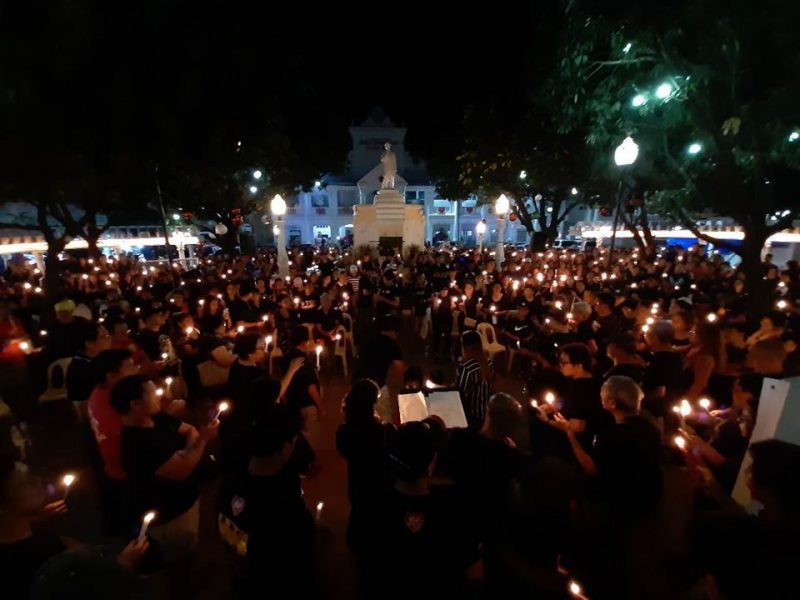 The candle-lighting activity opposing the extension of mining operations in Angono. (Photo courtesy of the Angono Public Information Office)

This article by Raymund B. Villanueva is from Kodao, an independent news site in the Philippines, and is republished on Global Voices as part of a content-sharing agreement.

The people and the local government of the Philippine town of Angono in Rizal Province are petitioning the national government to prevent the extension of mining operations in their area, citing grave damages to their environment after five decades of gravel extraction.

Members of the group UMALMA, the Ugnayan ng Mamamayang Ayaw na at Laban sa Minahan sa Angono [People's Unity Against Mining in Angono], said they support the local government of Angono in its “Yes to Rehabilitation [and] No to Quarry Extension” position.

The group said Angono no longer needs the mining companies’ annual fee of P33 million (652,000 US dollars) if it means exposing their town to dangers brought about by climate change and global warming.

The group warned about the impact of the predicted big earthquake that may hit Metropolitan Manila in the future:

It is a fact that Angono also lies merely 15 kilometers from the Manggahan Floodway and the Marikina Fault Line should ‘The Big One’ happen.

On 3 January 2020, groups gathered in front of the town’s municipal hall to hold a candle-lighting event and sign a manifesto against the continuation of mining operations by LaFarge Holcim Holdings and its associates Delta Earthmoving Inc., Batong Angono Aggregates Corp. (BAAC), and the Concrete Aggregates Corporation (CAC) of the Ortigas Group.

The two current Mineral Production and Sharing Agreements (MPSA), extended by the Department of Environment and Natural Resources (DENR) in 1995 and 1996 are due to expire this year and 2021.

UMALMA said that the companies applied for a seven-year quarry extension in 2017 that only became public knowledge when they asked company lawyers in a public hearing last January 2018.

The quarries shall have until 2029 to operate should the DENR grant their application.

UMALMA, however, pointed out that the Mines and Geosciences Bureau of the DENR has the discretion to approve extensions of up to 25 years in accordance with the Mining Act of 1995.

The group revealed that the companies’ original petition for extension was actually for this period, possibly granting continued operations until 2046. It added:

If the extension petition is approved, the companies will extract the remaining 57,940,264 million metric tons of gravel from the hills of Angono.

The 10-year extension would exhaust the remaining 58 million metric tons at the current annual extraction rate of 4,100,000 metric tons by the companies, UMALMA said. 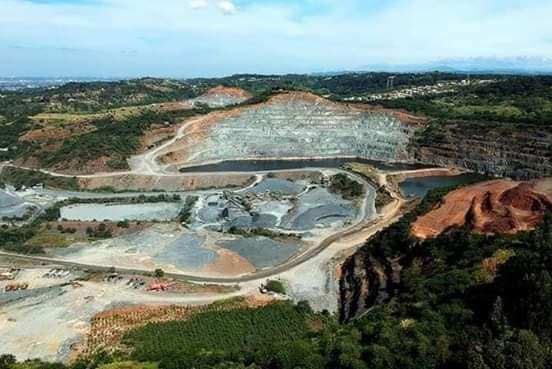 LaFarge Holcim for its part said it is practicing “responsible mining” and undergoing “progressive rehabilitation” of areas affected by its operations through tree planting.

Its Angono operations also use a Zero Discharge System water treatment in its settling pond that prevents wastewater from being discharged from nearby water systems such as Laguna de Bai.

In its website, LaFarge Holcim said it is a world leader in implementing international standards and sustainability in mining.

Sustainability is among our core values at Holcim Philippines. We believe it is a key driver of our business success and we strive to practice this every day in our operations.

This outlook may be seen in the company’s efforts to be respectful of the environment, ensure the health and safety of our people and partners and help uplift its host communities, it claims.

LaFarge Holcim said it also assumed the community development responsibilities of its partner CAC when its subsidiary BAAC took over the former’s Angono mining operations in June 2008 through its “LaFarge Way of doing things.”

BAAC`s implementation of its Social Development and Management Program (SDMP) has made the company quite a household name in terms of community development support not only in their two main host Barangays but also in the whole town of Angono, a DENR-MGB Region IV-A article said.

The article, written by one Sonny Villar, added the LaFarge Holcim subsidiary had been a recipient of a Titanium Achievement award for quarry operation in the 2009 Presidential Mineral Industry Environmental Awards.

UMALMA, however, revealed that while LaFarge Holcim has petitioned for an extension of its mining operations, it has also submitted its Final Mine Rehabilitation and/or Decommissioning Program approved by the DENR-MGB last 11 July 2018.

The FMRDP is a 10-year phase-out of mining operations in Angono that has a budget of P23 million (453,000 US dollars), the group said.

Part of the phase-out and decommissioning involves the removal of mining machinery and equipment; formation of a monitoring team composed of barangay [village], environment organizations, the local government unit and the DENR; revegetation, air monitoring, noise and fugitive dust elimination; safety; and separation pay and benefits to 136 permanent employees and about 500 contractual employees.

Part of the rehabilitation program is to transform the mined-out areas into a theme park or a residential and commercial area, UMALMA said.

But the group said the entire town has spoken and it wants the immediate implementation of the rehabilitation plan once current mining permits have run their course.

It is the position of the local government, led by Mayor Jeri Mae and Vice-Mayor Gerry Calderon as well as the Town Council, ‘Yes to Rehabilitation at No to Quarry Extension’.

It added that the local government is after environmental and health reasons as well as its legacy to young Angono residents.

“It is important to show that the people of Angono is united behind our call,” he said.

Mayor Jeri Mae for her part said she is heartened to witness that her town’s people are behind the call to save what remains of Angono’s hills.

The town’s petition, addressed to the DENR and President Rodrigo Duterte has been posted on social media, reaching more than 107,000 views in three days.

The people of Angono are one with our local officials in opposing the application for renewal operation of a mining company in Angono, Rizal Province, the Republic of the Philippines which has been operating for the past 50 years.