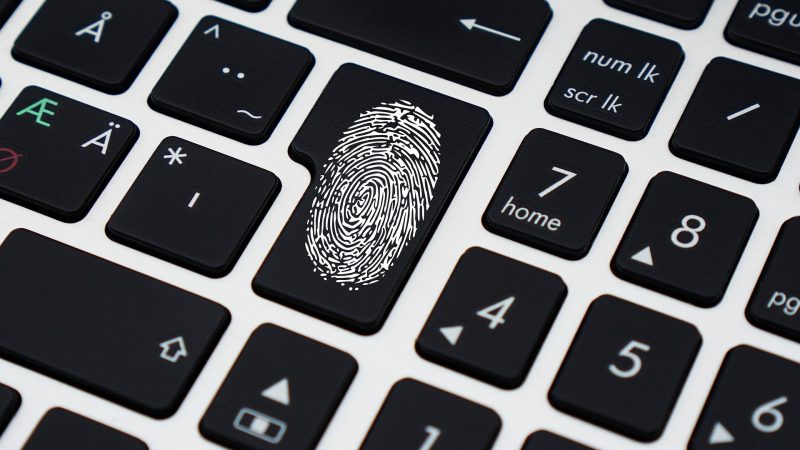 Citizens in Tanzania have an extended deadline of January 20, 2020, to complete the biometric SIM card registration. Image of a fingerprint on a keyboard via Pixbay/Creative Commons.

Tanzanian citizens have until January 20, 2020, to register their SIM cards through the new biometric registration system launched by the Tanzanian Communication Regulatory Authority (TCRA) on May 1, 2019.

In previous years, Tanzanian citizens were required to show their telecom provider a voting card, drivers’ license or passport to register SIM cards, pre- and post-paid. But those without documentation could typically register using the documentation of friends or relatives, according to Samuel Kabulo, a Tanzanian citizen who lives in Dar es Salaam, and spoke with Global Voices via Whatsapp.

Now, in order to activate pre- and post-paid SIM cards, over 21.7 million mobile phone users [1] in Tanzania must first register with the National Identification Authority (NIDA), which requires [2] all citizens to provide fingerprints and proof of identity as part of the registration process.

To complete the biometric SIM card registration process, users must then go to a local service provider, show their NIDA card or number, get their thumbprint taken — and that information is then shared, vetted and confirmed through the NIDA system.

Those who do not register using the biometric system will be locked out of their SIM cards on January 20, and will not be able to make or receive phone calls or text messages. The new registration process also ensures [3] that each user only registers one SIM card per network.

All eight networks in Tanzania have promised full cooperation [4] with the TCRA, according to a representative from the Tanzanian Mobile Network Operators.

TCRA is bringing your campaign, “No One Left Behind, Complete Registration,” to the district of Mtwara.

This deadline is a 20-day extension from the original deadline of December 31, 2019, when it was reported that only 42 percent [8] of SIM card owners had biometrically registered.

On Friday, December 27, 2019, President John Magufuli announced, [8] “This kind of registration is important for national security and will help to address fraud incidents involving mobile phones,” according to The Citizen.

To drum up support for the biometric registration system, the TCRA identified [4] 150 of Tanzania's top social media influencers to promote the campaign, “Haachwi Mtu Nyuma, Kamilisha Usajili” or “No One Will Be Left Behind, Complete Registration.”

The influencers, who boast a combined base of 20 million followers [4], agreed to use their social media accounts to raise awareness about the importance of biometric registration. They also agreed to send a clear and direct message to citizens: register or face the lock-out consequences.

On Tanzania's independence day, December 9, influencers like Masoud Kipanya, with over 784,000 followers, aligned with Airtel network and posted an urgent message to sign up for the biometric registration:

Today, we celebrate 58 years of independence. Feel free to peruse various networks with the speed of Airtel 4G and bundles with double data. Also, complete the biometric registration, it's fast and easy.

And this netizen joked that it's much better to wake up to a message from a lover than a threat from a telecom warning that they'll cut your line if you don't register:

Long lines at the identity office

To successfully register a SIM card biometrically, a citizen must first register with NIDA [19], the national identification authority, and receive either an actual identification card or at the very least, a registration number.

In the countdown to the original December 31 deadline for biometric registration, long lines [8] were reported at various NIDA offices throughout Tanzania as citizens attempted to clear the first hurdle of acquiring a NIDA identity number before completing their SIM card registrations with their network providers.

According to Kabulo in Dar es Salaam, acquiring the NIDA-issued identification card has been challenging for many citizens due to the birth certificate requirement.

“The big problem is the birth certificate which previously was of no importance to own it, and therefore, the majority of Tanzanians have no NIDA ID because it requires the applicant to bear a birth certificate or affidavit,” Kabulo told Global Voices through a Whatsapp message.

NIDA reported [21] in April 2019 that it had registered approximately 88 percent of all eligible citizens and will provide “mass registration” drives for the remaining 12 percent of citizens over the age of 18 who are eligible but missed previous deadlines.

However, Minister for Home Affairs Kangi Lugola “told lawmakers that only between 13 million and 14 million Tanzanians out of a population of 55 million [22] had national identification cards issued by … NIDA,” according to a November 2019 report by Xinhuanet.

Since the national identification exercise started in 2013 [23], only a small percentage have received actual cards due to printing issues and other obstacles. Many more hold NIDA registration numbers, which should be sufficient to follow through with biometric registration of SIM cards, reassured [2] TCRA authorities.

“Biometrics and digital ID are becoming firmly embedded in everyday life in many parts of Africa,” according to Biometrics Update [24], a website that tracks digital identification and biometrics systems around the world.

In June 2019, the government of Mozambique insisted [25] that SIM card registration would “help it fight crime and fraud” and issued an ultimatum to citizens to register SIM cards. But privacy activists viewed [26] the registration “as an infringement on users’ right to communicate privately,” especially during tense political periods such as elections.

Meanwhile, until November 2019, only 25 out of 54 [27] African nations have national data protection laws.

Kenya's controversial “Huduma Namba” [28] or “Service Number” system drew the most controversy in 2019 as it attempted to operate as a “single source of truth” that linked multiple digital identity systems. Civil society groups challenged [29] the system in court, loudly questioning the constitutionality of the scheme as well as the potential for hacking and threats to citizens’ privacy and security.

On November 8, 2019, Kenya rolled out a brand new national data protection law [30], becoming the 26th nation with data protection measures in place, but critics say it may not be enough.

Read more: Kenya now has a data protection law. What does this mean for netizens? [30]

As the biometric SIM card registration deadline looms in Tanzania, citizens may face similar issues regarding data privacy and protection. While there are several laws that address the regulation of data and data privacy protections, there is no single comprehensive data protection law [31] in Tanzania.

Editor's note: Thanks to Goodhope Amani for translation verification.