A 'Gregorian band', a Green Beret, and a big box? 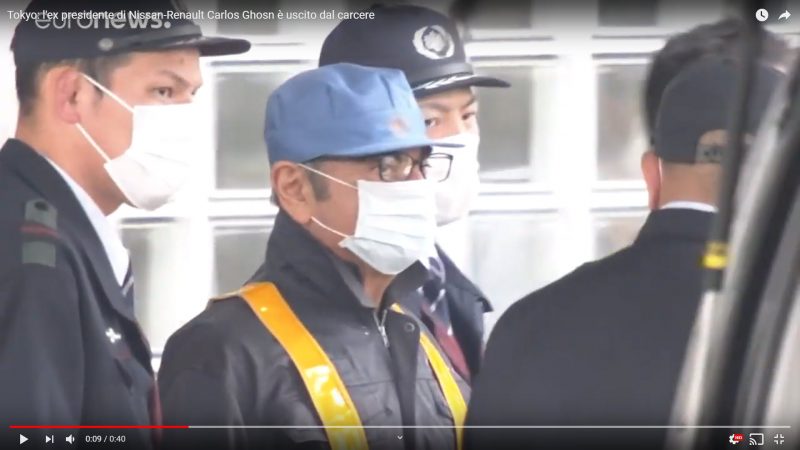 Disguised as a masked maintenance worker, Carlos Ghosn is released on bail in Tokyo on March 6, 2019. Screencap from Euronews official YouTube channel.

On December 31, 2019, Carlos Ghosn, disgraced former head of automakers Nissan and Renault, announced he had broken the conditions of his bail and had fled Japan for Lebanon. Details of his flight from Japan were slow to emerge over the year-end holiday period, and various theories of Ghosn's escape have included the help of a former Green Beret soldier, passing through border security in an oversize musical instrument case, and the covert help of the Japanese government itself, who wanted to be rid of the one-time Japanese corporate titan for once and for all.

In reality, Ghosn seems to have taken advantage of systemic shortcomings in Japan's police and prosecution services, the judicial system, passport security, ports control and more.

Ghosn had been released on bail and then confined to house arrest in March 2019 after being originally arrested in Japan in November 2018 on suspicion of fraud, tax evasion, violating securities laws and other allegations. At the time of his arrest in late 2018, Ghosn was chairperson of Japanese car company Nissan and its partner Renault, and had been accused of illegally diverting funds from Nissan for his personal use.

Since helping rescue Nissan from bankruptcy in 1999, Ghosn, a Brazilian-born French citizen with Lebanese ancestry had become one of Japan's most recognizable business personalities. Following his initial success with Nissan, Ghosn would eventually become chair of the world’s second-biggest carmaker, the Renault-Nissan-Mitsubishi Alliance, after setting up an infusion of cash to Nissan from French carmaker Renault, and then a partnership between the two companies. In 2016, Ghosn then helped Nissan take control of another struggling Japanese automaker, Mitsubishi, further establishing his influence in Japan's automotive industry.

Ghosn's arrest by Japanese prosecutors in November 2018 has shone an international spotlight on the perceived harshness of Japan's justice system. After being arrested, Ghosn was legally detained for 23 days without charges in a bare cell, and with no contact to the outside world. Following the end of the 23-day period, Ghosn continued to be detained in December 2018 without charge following additional allegations.

After finally being formally charged in court in January, Ghosn would then be denied release and would for several more months endure what some have called Japan's “hostage justice” for refusing to confess to charges brought against him by prosecutors.

#Ghosn was wearing a workman’s uniform, face mask, blue cap and glasses when he slipped out of the Tokyo Detention House and got into a minicar unrecognized by many of the journalists camped outside.
(@Reuters photos by Issei Kato ⁦@Hirame1972⁩) https://t.co/IbKK9onfyl

Ghosn was finally granted bail in Tokyo on March 6, 2019, and attempted to evade waiting reporters and paparazzi by disguising himself as a masked maintenance worker. He would be rearrested and released once more, with the new bail conditions restricting contact with his spouse, the fashion designer Carole Ghosn.

As Carlos Ghosn spent time under house arrest in Tokyo for the remainder of 2019 awaiting trial, his wife Carole campaigned on his behalf around the world, decrying Japan as a “fake democracy” because of its perceived lack of due process.

Citing an inability to get a fair trial and a supposed plot between the Japanese government and Nissan to “take him down“, Ghosn successfully made his escape from Japan to Lebanon on December 31, 2019.

When the news broke on New Year's Eve, the question for many was, how did Ghosn do it?

A ‘Gregorian band’, a Green Beret, and a big box?

Ghosn was supposed to be under house arrest and constant surveillance at his Tokyo home as he awaited trial in Japan on charges of fraud, tax evasion, and securities violations. Ghosn's quick trip to Lebanon obviously meant he had escaped from Japan by plane.

An early theory, since disproven, was that a “Gregorian band” had entered Ghosn's Tokyo home to help celebrate a supposedly traditional Christian Lebanese New Year's Eve. According to the theory, Ghosn was then smuggled out of his home and then Japan in an oversize musical instrument case with a fifteen-person team that included a former American Green Beret special forces veteran.

Carlos Ghosn passes through security (at the airport).

In fact, a combination of lax airport security, privileges enjoyed by the corporate and diplomatic elite, dysfunctional government relationships and rigid bureaucratic rules all made it relatively easy for Ghosn to skip bail and leave the country.

Retaining a passport made it easier for Ghosn to legally enter Lebanon, which has no extradition treaty with Japan.

If it turns out a key part of Ghosn's escape was him having one of his passports, I wonder whether he could have been issued some other form of ID to satisfy domestic law. pic.twitter.com/27hud7HFYQ

Ghosn was able to travel undetected by taxi and bullet train to Kansai International Airport, 430 kilometers from Tokyo (at one point during his escape he nearly encountered Japanese prime minister Abe Shinzo). His ease in evading house arrest highlighted Japan's relatively lackadaisical attitude towards monitoring Ghosn: security camera footage actually showed him departing for the airport, but the footage is only reviewed by Japanese courts once a month. The prosecution service, rather than local police, was responsible for enforcing Ghosn's arrest, and there seems to have been little coordination between different government agencies.

This disorganization among authorities made it easier for Ghosn to get through airport security. Ghosn apparently chose Kansai International Airport (KIX) because of a special terminal reserved for government and industry VIPs. Border control at the airport may have not been alerted about restrictions on Ghosn's travel. There is also the theory that Ghosn did indeed smuggle himself out in a large box of some kind that was allowed to bypass security at the VIP terminal at KIX after checking into a hotel near the airport.

Little Japanese government can do with Ghosn safe in Lebanon

It took the Japanese government a week to issue an official response. Initially, Japan's Justice Minister Mori Masako could neither confirm nor deny any details about Ghosn's escape. Mori would later announce that Ghosn's 9 million USD bail had been revoked, that the government had notified Interpol to request his arrest, and that immigration checks would be tightened. Japan has also issued an arrest warrant for Carole Ghosn for her alleged role in Ghosn's escape.

In the wake of Ghosn's escape, Japan commentators have argued that the country's exceedingly harsh treatment of Ghosn may have been reason enough for his flight. Other's have noted that what makes Ghosn's treatment so shocking is the privileges the business elite generally enjoy in other parts of the world when accused of breaking the law compared to regular folk.

David McNeill, the Economist's Japan correspondent, suggests it's possible to believe both things at the same time:

Is it so hard to accept that Carlos Ghosn is a grasping boss who muddied the boundaries between his personal finances and those of Nissan, and that his detention highlights epic flaws in Japan's criminal justice system? They're not mutually exclusive. https://t.co/J80Lh4ThWB

Ghosn is determined to have the last word. On January 8, the fugitive from Japanese justice held a press conference in Lebanon defending his innocence while criticizing Japan's justice system.