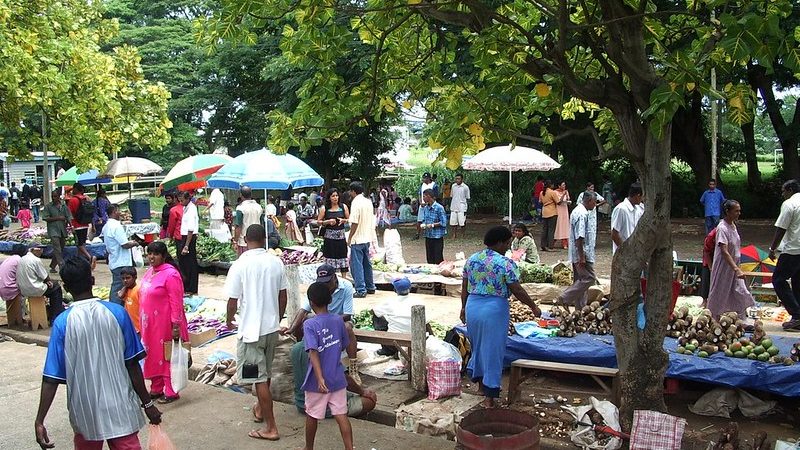 A road side market in Fiji. Flickr photo by Jared Wiltshire, Attribution 2.0 Generic (CC BY 2.0)

Fiji has banned the production and sale of single-use plastic since 1 January 2020. But some netizens have pointed out that the #PlasticFree slogan used by the government is misleading because thicker plastic is still allowed in the country.

The ban on single-use plastic is meant to protect the environment and preserve the natural beauty of the Oceanian nation:

We've finally stopped the sale & distribution of single-use plastic bags which harm our land & our marine life & also dirties our environment making it unattractive for our tourists who'll choose other destinations if we aren't careful.

Plastic bag litter diminishes #Fiji‘s beauty & can hurt our tourism industry which thousands of Fijians rely on for their livelihoods.

There will be a fine and prison penalty for manufacturers and retailers found guilty of violating the ban.

Consumers can opt to pay 50 cents for a reusable eco-bag.

There was confusion during the first week of implementing the ban. Both market vendors and buyers were unsure about what type of packaging materials can still be used. Some outlets were warned for using single-use plastic, as shown in this video of officials conducting a random inspection:

We have banned single-use plastic bags. this means that any bag under 50 microns is banned from the Fijian market unless they form an integral part of product packaging. Plastic bags above 50 microns are internationally classified as reusable bags.#FijiNews #PlasticFreeFiji. pic.twitter.com/f5hDErjfDw

Reacting to this clarification, some netizens accused the government of deceiving the public with its #PlasticFree campaign.

Ummm what happened to #PlasticFreeFiji??? Banning single use plastic for more plastic???? Where is the sense in that?

All plastic bags, no matter how many microns used, will end up polluting the environment. Just say y'all need more money, jeez. I see you charging extra for more microns. And remove that #PlasticFreeFiji because there will be more plastic now than there ever was.

I'm not blaming the govt at all! I am asking how disallowing one thin plastic bag to then allow a thicker plastic bag is actually banning single use plastic bags. This is whole exercise is to change peoples behaviour, you don't do that by giving them an equally bad alternative.

So Fiji put a ban on single use plastic bags only to replace it with thicker plastic bags (for fruits, vegetables and meat). What!? #teamfiji pic.twitter.com/A0P2877kI0

This is the deleted tweet. More proof that no one in @FijianGovt knows anything about plastic! https://t.co/XMnZagyLuO pic.twitter.com/bpQVBKfvF0

Ministry of Economy Head of Climate Change Nilesh Prakash said that enforcing the ban will lead to some difficulties initially but the long-term goal is to change people's mindset and behavior:

In every jurisdiction rather I would say, when this ban was imposed, it was chaotic. You look at developed countries because plastics have become so convenient for us. It’s readily available, it’s light in weight, but I think it’s about creating that transition, it’s about changing that mindset that we need to have overtime.