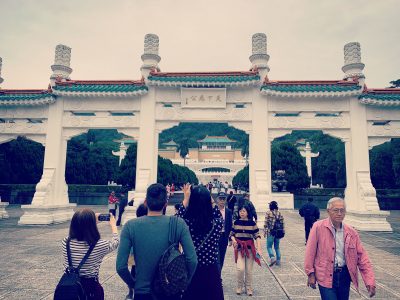 Entrance to the National Palace Museum in Taipei, with an inscription reading 天下為公, an expression attributed to Confucius that can be translated as ‘society belonging equally to all’. Photo by Filip Noubel, used with permission.

While Taiwan is often hailed as one of the most advanced democracies in Asia, this democracy is still quite young as the island only emerged from a harsh dictatorship a little over 30 years ago. Thus large questions of what should be its political, social, economic, environmental, and cultural model dominate the political debate and surge during elections.

Taiwan started its democratic transition in the late 1980s. In 1986, the first opposition party to the dominating Kuomintang (KMT) party, the Democratic Progressive Party (DPP) was established and allowed to run for local elections that same year. In July 1987, martial law was officially lifted, after it had been in place for nearly forty years. Subsequently, media outlets were allowed to operate freely, and multi-partyism became a regular feature of Taiwanese political life. Since then, Taiwanese society has been actively exploring different models of development — a process that continues to this day.

The economy: From Asian Tiger to stagnation?

A highly contested issue during the election campaign is the economic future of Taiwan. The island underwent rapid industrialization that turned it from a recipient of US foreign aid in the 50s and 60s to a major economic player in Asia where it now ranks as the 7th economy for a mid-size population of 23 million. Like other Asian Tigers, it diversified its economy and invested in technology, growing at a rate of over 7 percent during most of the 80s and 90s. Today, foreign trade remains the driving force of the economy, with a heavy dependence on both the US and China. In 2019, the average monthly salary was approaching 40,000 Taiwan dollars [US$1,300] and the unemployment rate was below 4 percent.

Despite overall positive economic indicators, Taiwan is now facing several challenges, chief among them are the comparatively low wages in the context of other Asian economies. Combined with rising real estate prices, this explains why some Taiwanese experience a sense of economic stagnation.

While the DPP is advocating for less trade dependency on China and aims to strengthen ties with South and Southeast Asia, the KMT sees the future in a deeper integration with the Chinese economy, a strategy that is actively promoted by Beijing via a number of special measures, such as special economic privileges in the mainland for Taiwanese workers and companies.

This is probably the most sensitive and polarizing issue, and not just during election season. Often called Cross-Strait relations in reference to the Taiwan Strait separating the island of Taiwan from mainland China, they continue to shape and reshape the political, economic, military and cultural discourse of all political actors in Taiwan.

For the Pan-Green Coalition led by the ruling Democratic Progressive Party (DPP), China is considered anything from a threat to, at best, an economic partner whose role needs to be reigned in. The narrative is that while China is unlikely to launch a military attack, it is trying to ‘colonize’ Taiwan economically and to manipulate Taiwan’s democracy via disinformation. Opposition to closer relations with China launched the 2014 Sunflower Student Movement. Developments in Hong Kong also have reinforced this view. The latest expression of an overall suspicion of Beijing’s intentions towards Taiwan is the December 2019 adoption of the Anti-Infiltration Law that seeks to prevent foreign countries from spreading disinformation, a law that can lead to up to five years in prison if proven guilty.

For the Kuomintang (KMT), closer economic integration with China is the best channel for a rapprochement across the Taiwan Strait. The KMT has thus, in the past, actively supported the Cross-Strait Service Trade Agreement (CSSTA) in 2013 which is part of the overarching Economic Cooperation Framework Agreement (ECFA) of 2010.

While not directly or openly articulated by the campaigning parties, the issue of sovereignty and possible independence of Taiwan is very present in the back of the current political discourse.

For the KMT, Taiwan remains the Republic of China that was created in mainland China in 1912, and eventually moved to Taiwan after it lost to the Communists in the civil war in 1949.

For the DPP, the issue is much more nuanced. While it does not openly call for Taiwan's independence, mostly because it would antagonize Beijing as well as a significant part of the Taiwanese population, it maintains that Taiwan is a sovereign state. At times, it also suggests certain sympathies with the idea of dropping the reference to the term ‘China’ in its name. One of such hints includes Tsai’s choice for her vice-presidential candidate William Lai, who is known for having stated publicly in 2018 that he would ‘work towards Taiwan’s independence’.

Beijing has stated that any declaration of independence by Taiwan would trigger a military response.

In the presidential campaign, this issue plays out in the field of diplomatic relations. Following Washington’s recognition of Beijing as the ‘sole China’ in 1979, most former diplomatic allies of Taiwan have over the years switched their allegiance to mainland China. The number of Taiwan’s diplomatic partners is dwindling every year, and is now reduced to 15, as Taiwan lost two allies, Kiribati and the Solomon Islands to Beijing in September 2019.

Relations with the US

The US plays an essential role in Taiwan’s economic and military strategy. It assisted Taiwan heavily in the 50s and 60s, and is now Taiwan’s 2nd trade partner, after China and before Japan. The two countries are currently considering a bilateral trade agreement, following Washington’s signing of the Taipei Act that pledges to support the island more robustly. More recently, there have been indications that the Taiwanese economy is benefiting from the ongoing US-China trade war.

Militarily speaking, the US acts as the main guarantor of Taiwan’s security sustainability through a series of acts and regular arms sales. As China is beefing up its military capacity, Taiwan is increasingly dependent on its US ally and has recently required Washington to assess its own military capacity. The reactions to the 2 January helicopter accident in which Taiwan’s Army Chief lost his life demonstrates how important that issue has become. 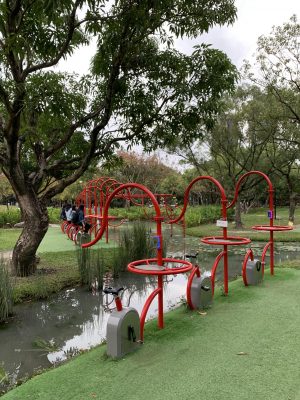 The environment is a question getting traction among Taiwanese voters. Historically, the green movement is linked to the democratization of the country since the late 80s when environmental protests multiplied and challenged the policies of the KMT, and for the first time, forced polluting businesses to close down. Today people are mostly concerned with air pollution, which is a result of domestic industries but also pollution coming from China, and nuclear energy. Taiwan is prone to strong earthquakes, and following the Fukushima nuclear plant disaster in Japan of 2011, opposition to the three currently active nuclear plants in Taiwan has mounted. Yet a 2018 referendum voted to retain nuclear energy, though by a mere 59 percent vote in favor. While the DPP’s official line has been to out phase nuclear energy, the KMT shares contradictory messages as to where it stands on the issue.

Finally, one issue that often sits on the generational faultline relates to moral values, particularly in the context of family, gender, and traditional roles. Like most East Asian societies, Taiwan is shaped by the Confucian value system that was co-opted by the KMT and diffused through its political discourse, the education system and social programs.

Then end of martial law and the political alternative with the DPP have since diversified views and brought significant improvement in the area of gender equality and the rights of the LGBTQI+ community. Tellingly, in 2016, Taiwan elected its first female, unmarried and childless president Tsai Ing-wen. 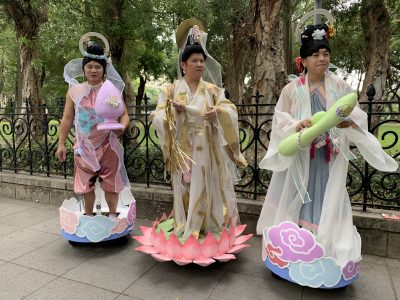 Conservative forces, drawn by large parts of the KMT, and certain Christian groups, have vowed to counter what they describe as an ‘attack on traditional values’, with a focus on the school system that now teaches sex education turning the school into a new political battleground.