Taiwan January 2020 presidential elections: who are the contenders? 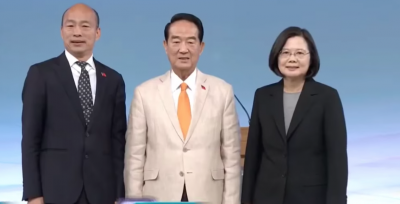 Screen shot from a BBC video on YouTube rebroadcasting the 3rd presidential debate of December 29, 2019. From left to right, the three candidates for the presidential election: Han Kuo-yu, James Soong and Tsai Ing-wen.

On January 11, 2020, Taiwan will hold key presidential and legislative elections in which three candidates are competing for the post that holds strong political prerogatives: the current President Tsai Ing-wen, the Kuomintang candidate Han Kuo-yu and the minority party leader James Soong. All three represent strongly divergent views on social values, economic development, relations with China and the status of Taiwan.

In 1996, Taiwan amended its electoral code to allow for a direct election of its president. Each mandate is four-year long, and the same person can hold it for a maximum period of eight years, if re-elected for a second time. The president and the vice-president run on a joint ticket and are elected on the basis of first-past-the-post system.

For this seventh direct election, an estimated 12 million Taiwanese are expected to vote. The results of the election should be known in the evening of January 11th, local time.

Tsai Ing-wen [蔡英文] made history when she was elected in 2016 as the candidate of the Democratic Progressive Party (DPP), thus becoming Taiwan’s first female president, out of the previous six presidents elected since the modified 1947 constitution. She is also the second president running on a DPP ticket to hold the presidential position, after Chen Shui-bian DPP presidency from 2000 to 2008.

Tsai is a 63 year-old former law professor who comes from a family of 11 siblings of mixed Hakka and Paiwan Aboriginal background. She studied law at Taiwan National University and completed her studies in New York and London. Upon her return to Taiwan in 1984, she taught law at different universities in Taipei.

Her political career started tellingly in 2000 when she was appointed chairwoman of the Mainland Affairs Council, a body regulating relations between Taiwan and China. In 2004, she joined the DPP and made a quick career, getting elected as DDP legislator, and in 2008 chairing the DPP, becoming thus the first woman to lead any major party in Taiwan.

Her potential as a serious presidential candidate became clear in 2014 when her party won the local elections by a landslide. On January 2016, she indeed won the presidential election by 56 percent against her Kuomintang opponent Eric Chu who secured 31 percent of the votes.

For the January 2020 elections, Tsai is running with vice-president candidate William Lai.

Tsai’s political agenda can be described as a mix of strong social and environmental policy at home, and a more pronounced distance from Beijing both economically and politically. During her first term, she introduced significant reforms in the labour and pension systems, established marriage equality, and language rights for different communities.

Regarding foreign policy and relations with China, Tsai has repeatedly stated publicly she does not endorse the 1992 Consensus that states in terms open to interpretation that there is only ‘one China’. The Consensus has been used both by Beijing and the Kuomintang in Taiwan as a basis for the status-quo in bilateral relations, and is often referred to as an equivalent of the ‘One Country, Two Systems’ by China. Tsai rejects both notions, pointing out at the crisis that has affected Hong Kong in the past six months and that remains unsolved.

Tsai’s voters are usually younger generations, traditionally regions in the south of the island. The DPP is part of a broader political family named the Pan-Green Coalition [泛綠聯盟] that brings together the Taiwan Independence Party, the Taiwan Solidarity Union, and the New Power Party platform. The coalition mostly operates within the Legislative Yuan, Taiwan’s parliament.

Unlike most prominent politicians and other elections candidates, Tsai is not married and has no children, a rare feature for prominent public figures in Taiwan that is commonly used by opponents as an argument against her.

Han Kuo-yu: the combative face of the party that ruled Taiwan the longest

Han Kuo-yu [韓國瑜] is the candidate of the Kuomintang party (KMT) that ruled unchallenged for 55 years, and maintains strong networks across many sectors of Taiwan’s society due to its historical role.

Aged 62, Han is a recently-elected mayor whose parents came from mainland China. Having studied English literature and law, he started his political career in 1992, when he was elected as a legislator to the Legislative Yuan on a Kuomintang ticket.

His political career came into the limelight in 2018, when against all predictions, he won the mayorship of Kaohsiung, Taiwan’s second largest city situated in the south. His victory was remarkable as the south is traditionally a DPP stronghold and no KMT candidate had been elected there in 20 years.

For the January 2020 elections, Han is running with vice-president candidate Chang San-cheng, a former Prime Minister.

Nicknamed the ‘Bald guy’ [光頭], Han is often described as a populist and is known for shifting positions, but also for using strong and often emotional language, which is one of his assets with certain segments of Taiwanese society. His political agenda is based on economic prosperity which he links directly to closer economic and political cooperation with China. His slogan for the 2020 election is “台灣安全 人民有錢” which can translate as “Safety for Taiwan, Money for the People”. Indeed, he often refers to the economic development he undertook as a mayor of Kaohsiung as a blueprint for his national strategy.

Regarding relations with Beijing, he supports closer economic integration, massive tourism from the mainland, and he publicly supports the 1992 Consensus, while he states he is opposed to the ‘One Country, Two Systems’ idea.

Han’s voters are typically older generations, residents of the northern parts of Taiwan. The Kuomintang is also the leading force of what is known in Taiwan as the Pan-Blue Coalition [泛藍聯盟 ] which brings together several parties that share similar ideological values. The coalition includes the Kuomintang, as well as the People First Party, the New Party and the Non-Partisan Solidarity Union.

James Soong: the third candidate who could decide the final outcome of the elections

James Soong [宋楚瑜] is the chairman of the People First Party (PFP), which is a member of the Pan-Blue Coalition but disagrees with the Kuomintang on certain points.

Aged 77, Soong was born in mainland China and moved to Taiwan with his family in 1949. He later studied diplomacy and political science in Taiwan and in the United States. He rose to prominence in 1974 when he was appointed English secretary to then Prime Minister and President Chiang Ching-kuo. He developed his political career as a ‘New Taiwanese’, supporting the Kuomintang’s first native Taiwanese President Lee Teng-hui in 1988.

Soong often says he wants to end the blue-green rivalry that has defined Taiwanese politics for many elections. His political agenda mixes priorities that can be found in both the KMT and the DPP. It is generally estimated that by declaring his candidacy, he might be taking away voices from the KMT candidate since his party’s supporters are mostly former KMT supporters.

Soong is married and has two children.