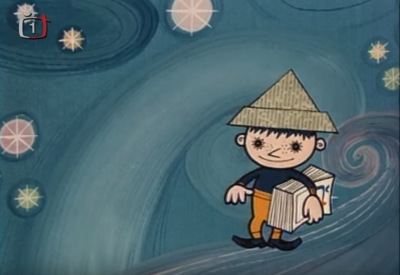 Screenshot from the credit sequence of Večerníček, showing the show's iconic character. From Youtube.

Today, January 2, the Czech Republic celebrates the 55th anniversary of Večerníček, one of its most famous children television shows, which has gained cult status and become a major touchstone in Czech identity.

In Czechoslovakia, the Communist ideology paid special attention to young audiences, in accordance with the belief that unlike their peers in Western capitalist countries, children growing up in Socialist countries benefited from special protections and enjoyed unique cultural rights. Books, films, sports, cultural events and other forms of entertainment events were made easily accessible to the vast majority of children, regardless of social standing.

In 1965, the state-owned Czechoslovak television launched a weekly program called Večerníček (Czech for “the little bedtime story”) which started and ended with a credit sequence that has remained virtually unchanged since. The show is ten minutes long, the ideal length to capture the attention of young children, and has always been shown at 18h45 since its inception.

This video marking the 50th anniversary of Večerníček's first broadcast on Jan 2, 1965, features the character embodying the bedtime story wearing his trademark newspaper-made hat and ascending a staircase. The theme music, composed by Ladislav Simon, and the voice-over by a five-year-old boy named Michal Citavý, have remained unchanged and become a shared childhood reference for millions of then Czechoslovaks, and now for Czechs. In many families, the end of Večerníček also marked the children's bedtime, as the show ends with the iconic phrase “Dobrou noc!” (Good night!). Here is an early black-and-white version of it:

For decades, the show, which eventually appeared daily, presented the best of Czechoslovak animation, as well as foreign animation from other Socialist countries. In 1989, when Communism ended in Czechoslovakia, the show began to feature Czech content exclusively. Works that appeared on the show include the now world-famous series Krteček (the Little Mole), which has become one of the major cultural symbols of the Czech Republic.