For comics fans in southern European countries, 2019 will be remembered as the year of a triple nostalgic jubilee of cult series: the 50th-anniversary publication of influential Italian comics ‘Alan Ford’, of the ‘Yugoslav Asterix’ Dikan, and of Serbian magazine Stripoteka.

Alan Ford, an Italian comics with cult status across the former Yugoslavia

Alan Ford, the comics parody of secret agent stories was created in May 1969 by the Milan-based writer Luciano Secchi, known under his pen name Max Bunker and artist Roberto Raviola, more known as Magnus. Max Bunker's company published the anniversary issue, number 600 in Italy in May 2019.

The Alan Ford series combines the Italian tradition of commedia dell'arte with satirical irreverence through the themes of injustice and backwardness, from politics and economics to human stupidity, bigotry, and greed. It became popular two years after its publication with the introduction of the villain Superciuk (known as Superhik in ex-Yugoslavia) in its 27th episode. This ‘alcoholic opposite of Robin Hood,’ an anti-superhero who literally ‘steals from the poor to give to the rich’ because as a street sweeper, he despises the lack of hygiene of lower classes, made the series a bestseller in its own country.

While the attempts to export this comics series to France, Denmark and Brazil failed, Alan Ford, alongside other Italian comics like Corto Maltese, became a fixture of the urban culture of Yugoslavia in the 1970s and 1980s.

Billboard in Zagreb, Croatia, advertising the book “Halo Bing” dedicated to the 50th anniversary of the cult comics Alan Ford, depicting the title character. Photo posted in May 2019 by Meta.mk News Agency, CC BY.

Alan Ford was first published in Yugoslavia in 1972 as part of the Superstrip imprint of the Croatian newspaper company Vjesnik. It soon became widely popular and gained cult status mainly because the original humor benefited from the excellent translation by the editor and journalist Nenad Brixy and later by his son. Both had been replacing whole segments of the text with their own mature jokes while using specific Croatian idioms.In 2015, the town of Varaždinske Toplice even erected a memorial plaque to Brixy for his contribution to the promotion of the Croatian language.

This comics had an enormous influence on popular culture in Yugoslavia, across the several languages spoken in the country. It inspired comedy productions such as Serbian movies (The Marathon Family, Balkan Express), Bosnian TV series “Surrealists’ Top Chart,”, as well as a political satire in the Slovenian newspaper Mladina (which fabricated an ‘apocryphal’ episode of the comics featuring Yugoslav leader Josip Broz Tito) and underground music with critical lyrics by Macedonian ska-punk band Superhiks.

The 50th anniversary was celebrated through public exhibitions displaying original panels and paraphernalia in Milan, but also in Ljubljana, Zagreb, Dubrovnik, Sarajevo, as well as in two events in Belgrade.

Some of these events were quite high-brow, like the exhibition “Alan Ford Runs a Lap of Honour” (a reference to the local title of the film Marathon Family) that took place in the National Gallery of Slovenia and can be seen in the following video:

The popularity of the Alan Ford comics was studied by sociologists, media and communication experts from almost all former Yugoslav republics. The author of one of these books, Lazar Džamić, explained its appeal in an article:

The reason why Alan Ford became what it still is [a cultural phenomenon], why it became ours and gained such popularity as nowhere else in the world, including its native Italy, is because it resonated with that former country [Yugoslavia] in different ways. It contains a high amount of surrealist farce, a high amount of satire denouncing an incompetent, corrupt, propagandist society, at that time in the context of the Cold War.

A new book on this matter titled “Hello Bing”, written by Croatian authors Ivan Sršen and Antonija Radić, was promoted in April 2019 in Zagreb. The book's title comes from a catchphrase in the comics. It contains an interview with the 80-year old author and publisher Max Bunker, and essays about the meaning and secret histories of this dark humor classic demonstrating the cross-border nature of the phenomenon. 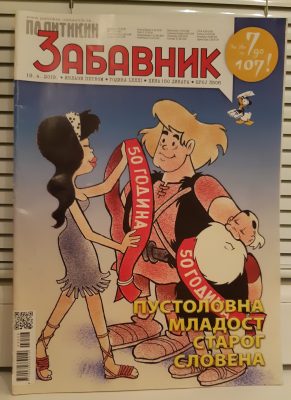 Politikin Zabavnik issue 3506 from April 19, 2019 celebrating 50th anniversary of Dikan comics with a headline “Adventurous youth of the Old Slav.” Photo by Global Voices, CC BY.

Conceived as a Yugoslav version of the French classic Asterix and first published by the Serbian magazine Politikin Zabavnik in 1969, the comics Dikan is set in the Balkans during the so called Migration Period in the Early Middle Ages. It portrays the comical adventures of two Early Slavs, considered ancestors of the contemporary South Slavs (Serbs, Croats, Slovenians, Bosniaks, Montenegrins, Macedonians, and Bulgarians). The main characters are the heroic tall, blonde and handsome Dikan; and his sidekick uncle, short, cunning Vukoje.

Dikan comics were popular across former Yugoslavia, with new episodes added every few years until the mid-1980s. The anniversary essay in the Politikin Zabavnik publication (issue no. 3506, April 19, 2019 – not available online) noted that the comics circulation was high, while images of Dikan were used as mascots of the then massive voluntary youth work actions, in commercial advertising, and that there was even an initiative to adopt it as a mascot of Partizan, one of the top four football (soccer) clubs in the country.

That essay by Nemanja Baćković also noted that the publisher received a letter from an institution in majority-Albanian Kosovo which protested the absence of Illyrians in the comics. Illyrians are an ancient nation considered by some to be the ancestors of contemporary Albanians.

Stripoteka, one of the longest-running comics magazines in the world 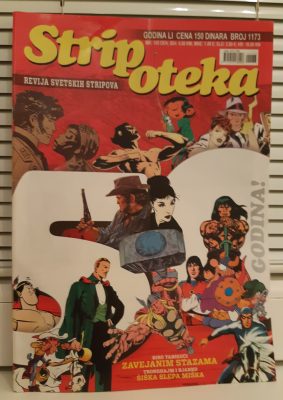 Stripoteka, one of the oldest surviving comics magazines in the world, celebrated its 50th anniversary in May 2019. It was originally published in Novi Sad, the capital of Vojvodina province of Serbia, as a special monthly edition of an already established magazine, Panorama. It become so popular that it ran as a weekly paper between 1972 and 1985.

Its concept was to serve as “review of world comics,” using it 60-page magazine format [similar to Spirou, 2000 AD or Heavy Metal], to present–whole or chopped up in sequels–top quality graphic novels and other comics forms. As a whole, taken as a cross-section or an archive of the medium, balancing classics and contemporary hits, it has gained the status of an ‘encyclopedia’ or ‘academy of sciences for comics.’

The front page of the 50th anniversary edition (number 1173, May 2019) featured a collage of some of the most popular characters, from the Franco-Belgian Oumpah-pah, Gaston,  Lucky Luke, Axle Munshine and Lieutenant Blueberry; to American Tarzan, Mandrake the Magician, the Phantom, Hägar the Horrible, Marvel's Thor and Conan;  to Italian Corto  Malteze and Cocco Bill; to Spanish Torpedo and British Modesty Blaise.

In an op-ed in that issue, editor Milan Jovanović noted that through all its diversity, Stripoteka had been largely missing out on one important trend in world comics – manga. Therefore, that issue featured a story by Japanese artist Jiro Taniguchi (1947-2017).