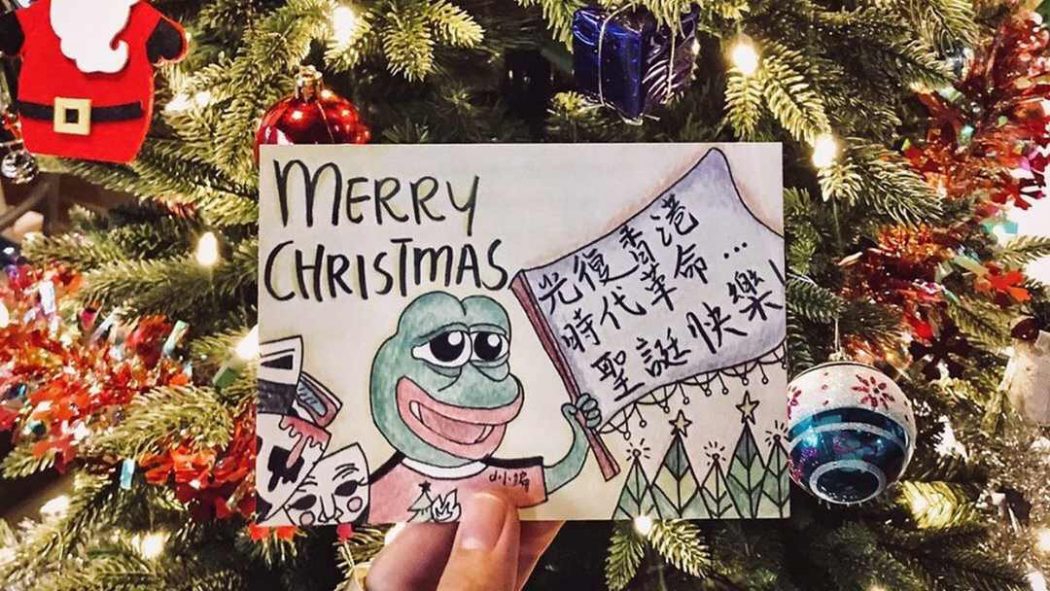 This post is originally written by Heidi Lee and published on Hong Kong Free Press on 29 of December 2019 [1]. The following edited version is published on Global Voices under a content partnership agreement.

Since the beginning of December, Moon has been writing Christmas cards with her friends at Ryerson University in Toronto. They purchased cards from stores and filled them with holiday wishes from a letter template.

Gathered in a room like workshop elves, they copied the same message over and over again, cut out stickers to decorate the cards, put them in envelopes and attached tiny pamphlets explaining the ongoing political turmoil [2] in Hong Kong that has gripped the city for over half a year.

Their efforts were in response to a call to action by the Telegram channel Free HK Xmas Card. Participants are asked to write Christmas cards and send them to people across the world. Fung, the admin of the messaging channel, said he aimed to “make the wish of Hong Kong people a universal Christmas wish for all.” 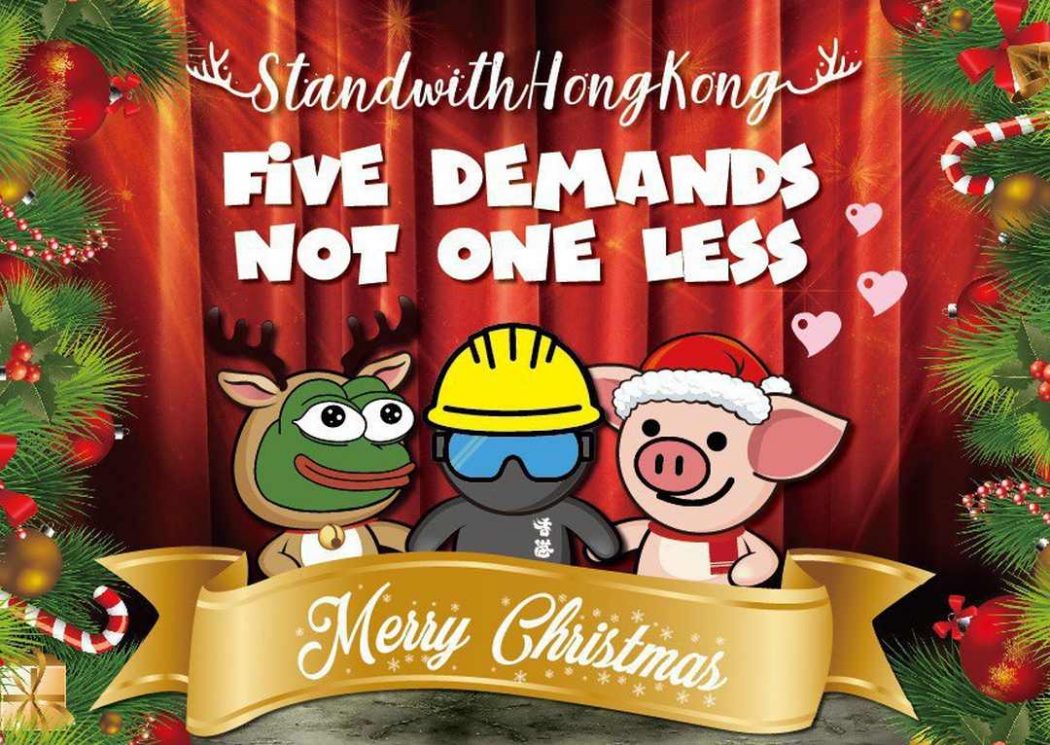 She said she got positive feedback from some of her professors when she mentioned this project she had been working on:

They thought it was a creative and innovative way to bring activism into conversations… It was a pretty good event where people in our group can try to connect to [people in Canada] by practically putting our hands down [to write] and starting more conversations about what’s happening in Hong Kong. 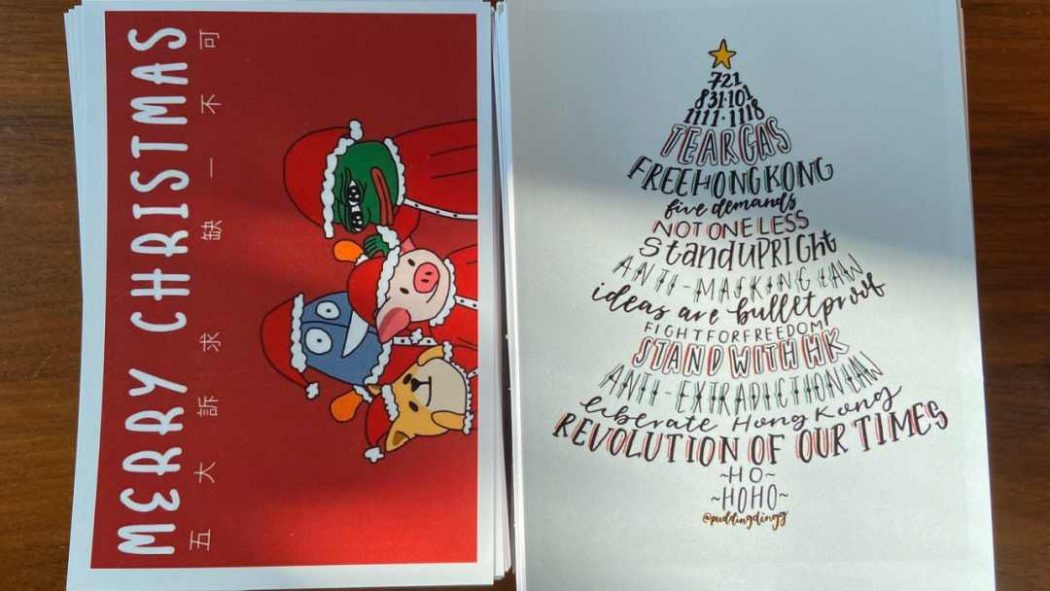 With approximately 4,000 people subscribing to the Telegram channel, Free HK Xmas Card attracted a lot of participants, including Hongkongers like Moon and her friends living overseas.

Back in October, Fung initiated the #freehkxmascard campaign as he believed the right to protest was under attack. The project was designed for peaceful, rational, and non-violent protesters who felt like they were not contributing enough.

People volunteered to translate holiday greetings into different languages and write letter templates for people of different backgrounds. The team included a total of 21 core members, with nine located in Hong Kong and a dozen overseas.

I think maybe peaceful protesters are able to do more than going to rallies. Spreading awareness to the world is a new way out. 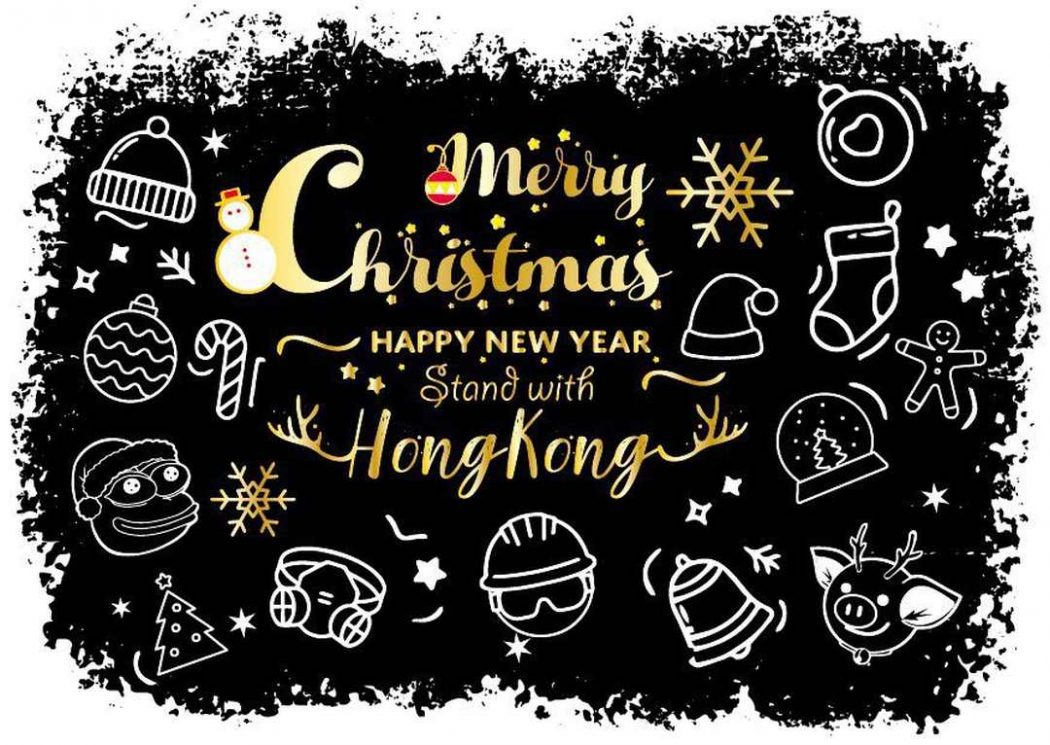 Paterson thanked the group for their Christmas cards. He posted a picture of Christmas cards with characters wearing masks below a calligram formed by words that represent Hong Kong. The politician stated those were his favourite.

In Elbæk’s post, he posed with the Christmas cards he received and covered his right eye, a gesture indicating solidarity with a volunteer medic who suffered an eye injury during a protest in the summer.

Last day at my parliament office before holidays starts. I’m sitting behind some of the many, many Christmas greetings I have received from ordinary citizens from Hong Kong. I’m totally overwhelmed. I can only say one thing: #standwithhongkong [9] and may the force be with you #dkpol [10] pic.twitter.com/Vz9tle42w3 [11]

Besides politicians, participants also received replies from those they contacted via Postcrossing, a postcard exchange project allowing people to exchange postcards from strangers around the world. 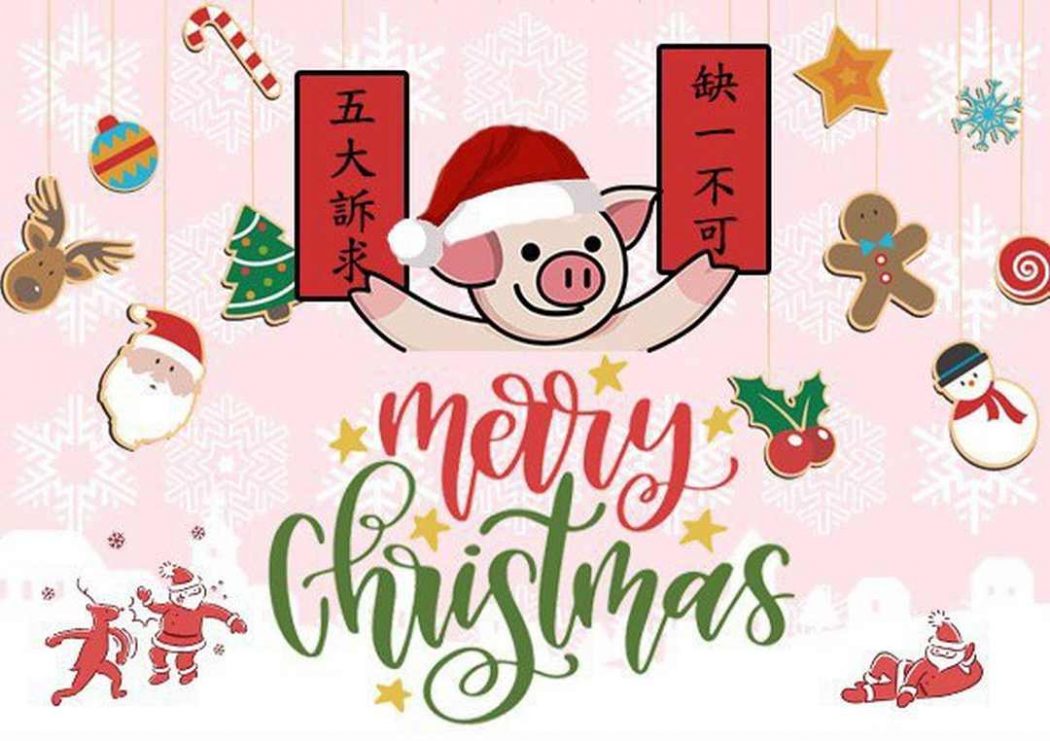 Fung said he understood foreign countries do not have the obligation to help Hong Kong, but he believed in the impact of Christmas cards:

If we forcefully shove data and facts [in] foreigners’ faces, they might be overwhelmed by the message and not read it. Christmas cards are more approachable to all walks of life.

[W]e tried to connect with them on a one-on-one level, and that gave us a little bit more appreciation. They would be more open to receiving information about Hong Kong.

Fung said he did not keep track of the exact number of cards that had been sent. However, he said more than 30,000 cards were posted out in November alone.

As the festive season comes to an end, Fung and his team are launching two new events— Free HK Nengajo and Free HK Lunar Card to help raise awareness of the movement’s demands into the new year.

Fung said Free HK Nengajo is designed for the Japanese. Nengajo is a traditional form of New Year’s greeting in Japan. Similar to Christmas cards, it would be used as a way to connect with older generations in Japan who may not always care much for foreign affairs.

Similarly, Free HK Lunar Card would also be used to spread awareness that the New Year is not only for the Chinese, but for everyone. Fung said:

I hope this event will inspire the peaceful, rational and non-violent protesters to carry on.

Whilst some might think sending out Christmas cards may not change anything, Fung said that the idea may give rise to the butterfly effect – the notion that a small change can make a huge difference in the system:

Never underestimate the power of your action… After all, our movement started with something small and turned into something massive.

Moon and Fung were granted pseudonyms to protect their identity for fear of repercussions.

Heidi Lee is a Toronto-based student journalist from Hong Kong. She has been writing for the Eyeopener, Ryerson University’s independent student newspaper, since 2018.